US (MI): “One grower can now take care of over 100 basket lines by himself”

“We thought growers would be mainly interested in the environmental aspect of our irrigation system, but we have noticed that labor has been the most interesting aspect for growers,” says Len Logsdon, Greenhouse Automation Engineer at Control Dekk. “Our Oasis system is a hanging basket irrigation solution that has been pretty much sold out this year. In addition, we introduced our new Genesis system a year ago, which is an automated boom control system that is already gaining praises for solving common boom irrigation challenges.” 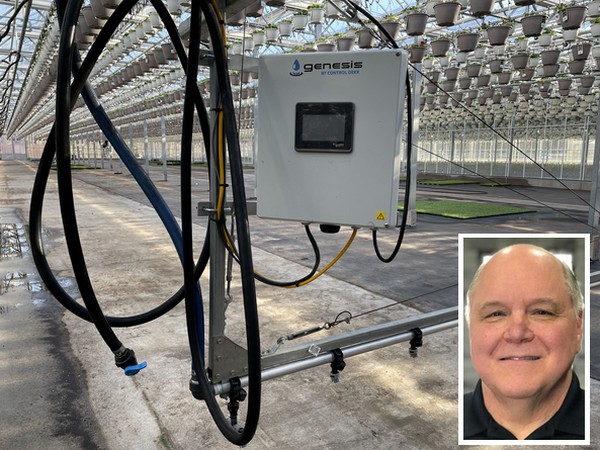 Len Logsdon, with the Genesis system in the background

Saving labor
According to Logsdon, there are two main benefits for growers that are using the Oasis system, which is an automated watering system for hanging baskets. “Of course, having an automated, efficient system means that less labor is required. In addition, it reduces water by up to 50% by giving each basket only the water it needs. We thought the water reduction would be the main aspect growers would be interested in, as many companies want to reduce their environmental impact. Yet we notice that many of our customers are using Oasis to save labor. One grower we know who uses the system is now able to take care of over 100 basket lines by himself, which is something that would definitely not be possible without Oasis.” 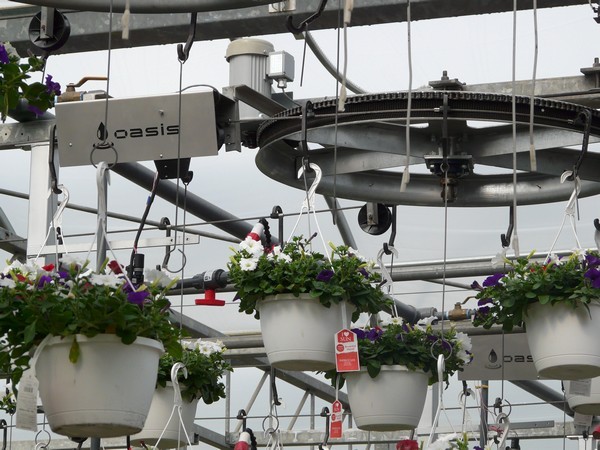 An innovative boom control system
About a year ago, Control Dekk launched their latest innovation, Genesis. “This is an automated boom control system that is very flexible and user friendly. Last year we installed our boom controller on 42 booms in three different greenhouses, and the feedback has been really positive. The grower can set up the crops into the system and name them, so that they can visually see where the crops are on the touch screen. The system can water the plants based on demand or a certain time schedule. You can also make the system work based on vapor-pressure deficit (VPD). The system can then water the plants based on the amount of moisture the plant or soil has lost. The system would then water more on sunny days than on cloudy days, for example. These past years, when we were setting up our Oasis systems at greenhouses, basically all of them were asking us for a system like this. And now that we have launched it, growers are really positive and we are already almost sold out of them.”

Predicting the material shortage
Recently, the industry has been impacted by a shortage of materials. Control Dekk, however, took action right before everything became challenging. “At the first of the year, we acquired extra storage space and purchased as many parts as we could afford. We were very fortunate that we were able to do this in time, as it enabled us to have almost enough materials for our production this year. And with the current demand for our products we have basically outgrown our current facility. We will definitely be doing something about that next year.”