The benefits of using IPM 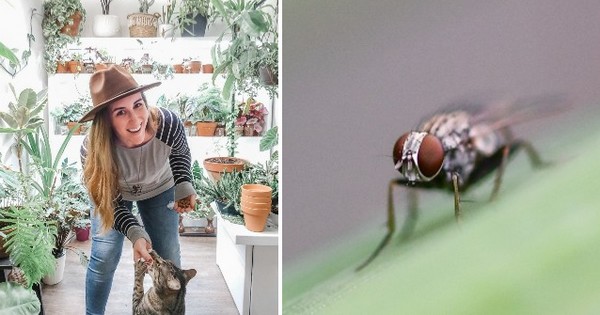 Michelle, what do you do at Costa Farms?
My team and I manage all of the pests (bugs and disease) on the farm using primarily biological control methods. We use good bugs/fungi/bacteria to fight the bad bugs/bacteria/fungi.

Can you give us a fast description of what IPM is?
IPM stands for Integrated Pest Management and is basically the combined use of several methods to control pests; Chemical, Biological, and Physical.

Why does Costa Farms use IPM?
IPM is a sustainable approach to horticulture. The traditional approach of using predominantly chemicals for everything can lead to resistance issues, which, in turn, makes everyone’s lives more difficult. Here's why: Once a pest develops resistance and a chemistry loses effectivity you can back yourself into a corner if you don’t have a plan B, plan C, etc… Not to mention any environmental impacts this may have on the environment.

By using IPM we are able to get a lot more selective with which chemistries we use lean on the other two methods. It is incredibly complex and one day, removing and discarding infected plants may be the best option, but other days it may be more logical to go in with a biological. It is exciting because this field is currently growing at such a rapid speed who knows what other options we will have in the next decade!

What’s the favorite part of your job?
Getting to see the beneficials in action killing pests! Seriously, it never gets old. It’s like a little gladiator battle going on out there a couple thousand times per day.

Have you always loved insects?
In fact I have! Growing up I would spend hours everyday outside watching and collecting bugs. I would fill up mason jars with bugs and leaves (because in my mind, every bug ate the same leaf). Of course, none of these bugs survived and my poor mom would clean them up and have mason jars constantly ready for my torture, I mean science. That is how I got the nickname that my family still calls me today: “Bug.”

What’s your favorite beneficial insect?
Cryptolaemus aka Mealybug Destroyer. The name really says it all on this one. But aside from being everybody’s hero (because mealybugs are the worst and they seem to be everywhere right now), these guys have some really unique evolutionary quirks. Cryptolaemus have been dubbed by some as the “wolf in sheep’s skin” because when they are larvae they resemble their prey. That’s right – they mimic mealybugs! This is important because aphids secrete honeydew (basically sugar poo) which attracts ants. These ants will defend and protect the mealybugs against any attacking intruder but since the Cryptolaemus looks like a mealybug, it goes along unnoticed eating its neighbors.

This was my “gateway biological.” When I managed the trial garden in Miami, we had a very large mealybug infestation on some Podocarpus and the IPM manager at the time ordered one bottle of Cryptolaemus adults. The carnage was out of this world and happened very quickly. The best part? They ate all the waxy residue on the plants! Poof! Gone! There was literally no evidence that mealybugs were ever there and they never came back.

So there’s a rumor that you have 500 plants in your home. Is that true?
It takes me a while to count (as you can imagine). But yes, the last time I counted it was somewhere around 475 plant. I have a problem. Please someone schedule an intervention! It started with a Begonia maculata and spiraled out of control from there.

It must feel pretty jungly at your place.
It is funny because once you get up to that many plants your house/apartment starts to create its own biome. It is always a good 10-20% more humid in my house than it is outside.

What’s your favorite plant?
My Anthurium clarinervium will likely always be my favorite plant in my collection. It is durable and its leaves are like paintings. Lately I have been experimenting with growing these from seeds which has been a very rewarding process. The time from pollination to planting is about the same as the human gestation period! There was a group of seedlings that I pollinated the week that I found out I was going to be an aunt and they were ready to plant on the week my niece was born. The serendipity of the timing was not lost on me.

You mentioned that you love to take macro photos of insects. Can you share your favorite photo? So what’s so special about this little guy?
This is a hunter fly and they suffer from a serious case of mistaken identity. Most people think that these are just regular old houseflies and they kill them, but they are actually beneficials. They are voracious predators and will eat anything that flies in front of them (including their siblings). They are smaller than most flies and have grey stripes on their abdomen. When it doubt about what it is, watch it. Hunter flies tend to sit still on the surface of a leaf waiting for their next victim. They will pounce off the leaf, catch the insect in mid air, kill it, suck it dry and then leaving the empty shell behind. It is also the reason that we will occasionally see dead gnats on the tops of leaves. When we see that, we know a hunter fly was there. There’s not a lot of research available on these guys but I do think that they are a very important part of any IPM program and that they do a lot more good than we give them credit for.

If you could be a beneficial insect, which one would you be?
This is really tough… I guess I would be an Orius aka “Minute pirate bug.” First of all, what a cool name. But furthermore, these guys are my hero as they saved us from a thripocalypse a couple of summers ago. They are thrips murdering machines, but at the same time, I have seen them stabbing other various pests I imagine mostly for fun. I could see myself just going in, guns blazing trying to take down as many pests as possible before I go diapause and take a long winter nap.