The shortage of natural pollinators, such as bees, is threatening global food production around the world. Researchers at West Virginia University have come up with a plan B to this decline in pollinators by creating a robotic pollinator.

A team led by Yu Gu, associate professor in the Department of Mechanical and Aerospace Engineering, is creating StickBug, a six-armed robot to assist humans in greenhouse environments by pollinating various crops.

Gu’s robotic pollination proposal submitted to the National Robotics Initiative was selected for $750,000 in funding from the U.S. Department of Agriculture. Joining Gu on the project are Jason Gross, associate professor and associate chair for research, mechanical, and aerospace engineering, and Nicole Waterland, associate professor of horticulture and director of controlled environments. 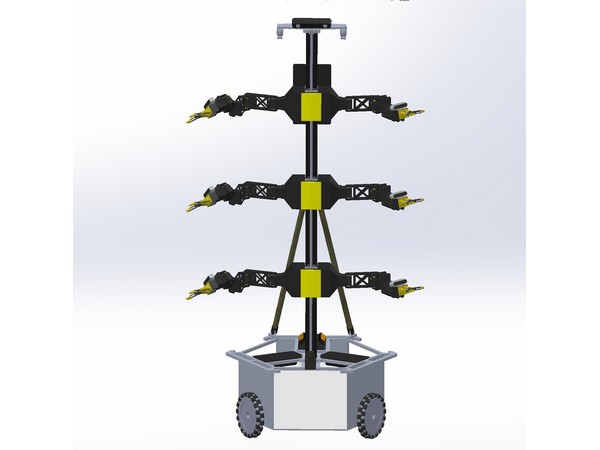 This is a computer-generated image of StickBug, a six-armed robot to assist humans in greenhouse environments by pollinating various crops. (WVU Robotics)

“StickBug maps out the environment and once the robot has a general idea of the environment, it will build up a more detailed mapping of the plants and knows where the flowers are and which flower needs to be pollinated,” Gu said. “It will make a plan on what to do. Then, it will get close to each of the plants, start swinging its six arms and start pollinating.”

Arms for multiple purposes
According to Gu, the six arms are mainly for improving the efficiency and effectiveness of the robot. For example, some flowers could be in hard-to-reach places and the robot may need to use two arms; one arm for grabbing the branch, and the other arm to pollinate the flower.

The robot is responsible for the time-consuming tasks of flower inspection, mapping, pollination, and development tracking, allowing growers the freedom to focus on other greenhouse tasks like planting, irrigation, and pest control.

“The focus of the end product is to try to lower the barrier of entry to make it more practical, so that growers would want to adopt a robotic technology in their greenhouse operation,” Gross said.

The long-term goals for this robot are to care for individual crops efficiently, improve food security during insect declines, support indoor agriculture, and provide services beyond what insects can do such as collecting data on the crops.

Crops
Evaluation of StickBug’s pollination effectiveness will be performed in the WVU Evansdale Greenhouse using blackberries and tomatoes. These crops were chosen because both are sufficiently popular in the United States and hold economic value. 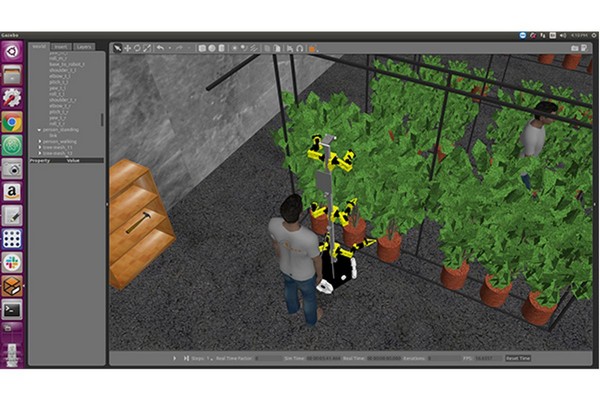 An animation helps illustrate the potential of StickBug. (WVU Robotics)

“Tomato is probably one of the most economically important crops in the country and it also needs help for pollination,” Gu said. “Another major reason is that tomato plants grow year-round, and thus there are always tomato flowers to do experiments on. Greenhouse tomatoes can be produced for 11 months out of the year, so there’s a continual need for pollinators,” Waterland said.

Waterland noted that tomato and blackberry crops are both being produced more and more in high tunnels and greenhouses, where researchers see potential utilization of the robotic pollination system.

According to the USDA Forest Service, about 80% of all flowering plants require assistance from animals for pollination and, without pollinators, many crops cannot propagate. With the aid of robotic pollinators, Gu said growers can overcome the shortage of pollinators and obtain higher profit opportunities by planning flexible pollination schedules independent from the activity of pollinators.

Time is ripe
“Agriculture is a field that is very ripe for disruption with robotics and automation,” Gross said. “The hope is that a lot of those challenges with perception and manipulation and interacting with the plant will be more widely applicable to a lot of different robotics agriculture applications.”

While West Virginia is a primarily rural state, it is not an agricultural state, meaning that it imports more food than it produces. Gu hopes that this robotic pollination technology can support more people in the state to have their own venture in agriculture.

For WVU specifically, Gross, Gu, and Waterland said that the robot pollinator also provides educational opportunities for students. “WVU allows us to do cutting-edge research,” Gu said. “This project provides an opportunity for students to do both hands-on and theoretical research in robotics as well.”

“In addition to allowing us to conduct research and disseminate research findings to peer-reviewed publications, we’ll be funding graduate students and undergraduate workers off of this project,” Waterland said. “We’ll be utilizing the grant funding from this project to educate the next generation of faculty and researchers, strengthening the development of these individuals coming out of universities.”

Engineering programs
According to Gu, specific programs will also be developed to integrate the engineering and skilled labor training domains so that future training aligns with the rapidly advancing use of robotics.

“The great thing about this project is it really encourages these interdisciplinary, intercollege collaborations,” Waterland said. “It builds a bigger, whole picture for the students and for the research. The ultimate goal is that this actually goes into the industry and that we develop a robotic platform that can be used in the agricultural discipline.”