Three florists talk about the best garden roses for weddings

Let’s start with the premise that a wedding must have garden roses. Maybe one particular variety has been selected as a signature flower, a keynote for the wedding’s theme and color scheme. What do you combine with that rose — in the bridal bouquet and wherever else it may appear — to make the most of its beauty and value? 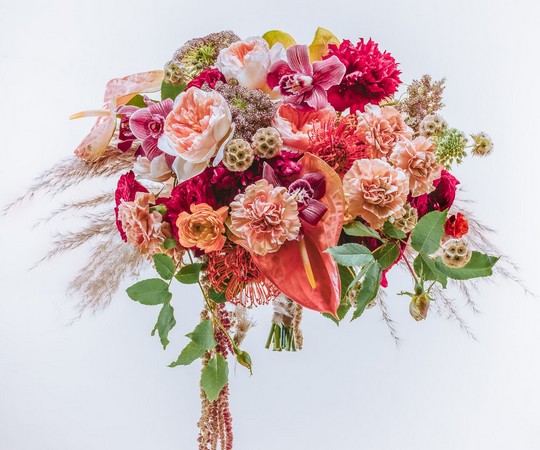 New colors and forms
“First of all, I think everything looks amazing with garden roses,” says Holly Chapple, of Holly Heider Chapple Flowers, Hope Flower Farm, and the Chapel Designers collective, "but if you really want your garden roses to be the top players in the event, one way to do that is by combining them with flowers that have a completely different shape.

“You can choose to skip the peonies and ranunculus and instead pair your roses with unique greenery and with things like stock, larkspur, and snapdragons,” Holly suggests. "That is a strategy that lets the roses dominate the design, in part because, from a budget point of view, it may allow you to use more garden roses and fewer of the other flowers."

"If, on the other hand, you still prefer to mix garden roses with other round flowers, you can’t go wrong with spray roses," adds Holly. "With three to five laterals to a stem, they fill the spaces between bigger flower heads beautifully, with complementary color, texture, and form." Some of Holly’s favorites, in the past, have included White Majolica or Jeanine, for white spray roses, hot pink Gem Star, peach Ilsa, and antique, peachy pink Antigua.

Like and not like
For Dutch-born designer René van Rems, the key to making garden roses stand out is to think outside the box. On the one hand, other flowers and foliages with a garden look make natural companions for garden roses: border perennials, say, like delphinium, sweetpeas, columbine, lupine, digitalis, phlox, Alchemilla mollis (lady’s mantle), along with garden foliages like dusty miller and geranium or caladium leaves.

"Part of what makes all of these flowers and foliages work well together is that they share a fuzzy, or papery, soft-tissue texture. As true garden plants, they have not always been easily available as cut materials from professional suppliers to the floral industry, but with the growth of the Slow Flowers movement, they can now be obtained, in season, from local growers in many parts of the country." 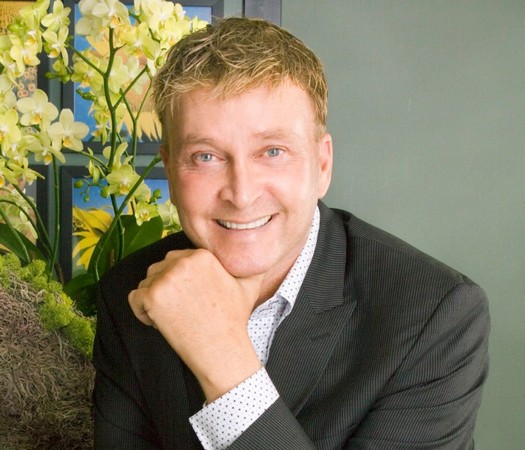 René urges designers to get adventurous is with color and form. "Many garden roses come in soft, blush tints. Consider combining those tints with stronger, more vivid hues in the same color family: butter-yellow Beatrice, for example, with bright orange calendulas. Edith’s pale gold-apricot interior, surrounded by soft pink outer petals, could be possibly matched with a gloriosa lily in glowing yellow and magenta.

“By adding in colors that pop but also harmonize with the roses, you get away from those washy, predictable pastels,” says René. Gloriosa is an example of a flower that can harmonize in color yet contrast with the rose in form; others would be clematis, vanda, or cymbidium orchids.

Round, mass flowers can also combine with garden roses for a lush, romantic, Old World look, René concedes. "Be careful, though, to avoid composite flowers with ray petals and a strong central eye, like gerberas, sunflowers, or Café au Lait dahlias. Pompon dahlias or other round flowers—lisianthus or ranunculus, mums or carnations—are fine. 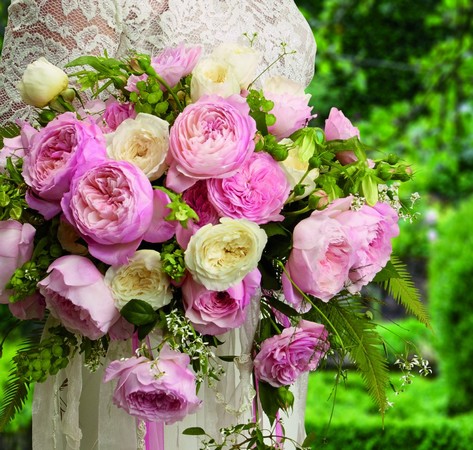 “If you have a composite flower with a strong center, the eye goes to that center,” warns René, “and it completely distracts from the voluptuous effect of all the other round flowers.”

Respect for royalty
When Hitomi Gilliam AIFD first began promoting a floral design trend she calls tropical nouveau, she really had not only tropical flowers but garden roses at the top of her mind. “Brides would come to Hawaii for their destination weddings and insist on getting all their flowers shipped from the mainland, including garden roses,” she remembers. “I wanted to show them how they could have what they wanted and also include some local color.”

Indeed, color is the key. “People used to think that tropicals came only in red and green,” said Hitomi. “They don’t know about the pinks and peaches, the creamy whites, and the pale greens."

For wedding flowers that include tropicals in that soft, romantic color scheme, Hitomi’s first thought was to pair them with garden roses. “They are perfect for that, precisely because they are the total opposite of tropicals,” she explains. "Put the soft, ruffled texture of garden roses next to the smooth surface of an anthurium or a broad-leaved tropical foliage, and the texture of the rose comes to the fore. 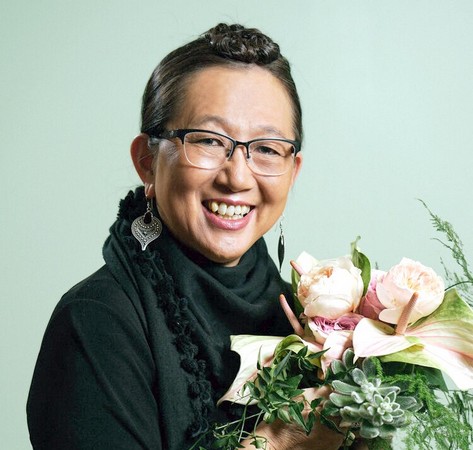 Imagine, for example, pairing Juliet roses with either of Hitomi’s two favorite peach-colored anthuriums. Toyama Peach is an obake anthurium in a soft peach, often with a greenish edge. Cognac, a Dutch-bred anthurium, combines peach and green with brownish, muddy tones — perfect for color-blending with garden roses like Quicksand, Caramel Antike, or Golden Mustard.

Not all anthuriums are glossy, Hitomi points out. Many tulip anthuriums (Anthurium amnicola) offer a matt surface. Tropic Lime is one example, with a light green tint that absorbs rather than reflecting light. The cup-shaped bract can be used to cradle a garden rose, almost like extravagant, light green foliage.

"Or combine a light pink garden rose—say, Princess Hitomi—with variegated ti leaves. The colors in those leaves can go from the most brilliant green to the most subtle pink,” says Hitomi. “It just sings, because of the mix.” 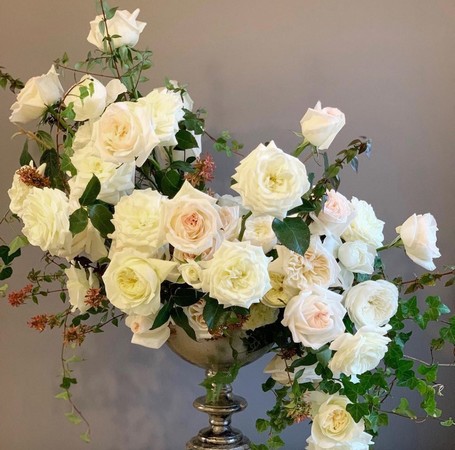 Whether or not the wedding takes place in Hawaii or another tropical destination, for the adventurous bride, tropical flowers can make garden roses stand out in all their splendor. “The big message is about respect for royalty,” says Hitomi. “If you are using garden roses, the other flowers should complement, not compete.”