"LED light improves the yield and quality of cut roses"

Light is one of the most important environmental factors affecting crop growth and development, and it is the energy source for crop photosynthesis and the formation of yield and quality. Low light conditions often occur during greenhouse rose production in winter and spring, which affects the growth, development, yield and quality of roses. Supplementary lighting is an effective measure to solve this problem. Growers often use high-pressure sodium lamp (HPS) or LED for greenhouse artificial lighting. However, the national policy of energy saving and emission reduction limits the further application of HPS. Furthermore, LED has the advantages of low energy consumption and high lighting efficiency, growers now tend to choose LEDs as artificial lighting, especially for the production of high value-added crops such as cut roses, writes Dai Jianfeng, Ph.D., visiting scholar at Wageningen University and Senior Plant Specialist & Project Advisor of Signify Horticulture LED Solutions.

Signify's horticultural LED has been applied as supplementary lighting for greenhouse flower production for a long time and has achieved satisfactory results in both commercial production and scientific research field. For the rose-growing greenhouses in Europe, based on existing regular light recipes, Signify also specially developed the LED rose recipe, which is dedicated to the supplementary lighting of greenhouse roses. Yunnan, as the main producing area of cut roses in China, has a different climate from Western Europe. So, for local growers, two most important questions of concern are raised: (1) How is the performance of LED supplementary lighting for greenhouse roses in the Yunnan area? Are there any quantitative results? (2) Is it a must to use a rose LED recipe for supplementary lighting in Yunnan? In order to answer the two questions, Signify, together with Yunnan Aibida Horticulture Technology, a Chinese rose grower, conducted an experiment about the effect of LED on greenhouse cut roses.

Experiment overview
The experiment was carried out in the 2020-2021 growing season in Aibida Malong cut rose production greenhouse. Two types of Philips LED top lighting modules were used in the experiment: LED rose recipe and LED regular recipe. The light intensity (PPFD) of the two LED treatments was the same. And the control is the area without supplementary lighting. The effects of LED on the growth, development, yield, and quality of cut roses were observed. The overview of the experimental area is shown in the picture below. From near to far, there is the control area, the LED rose recipe area, and the LED regular recipe area, respectively. 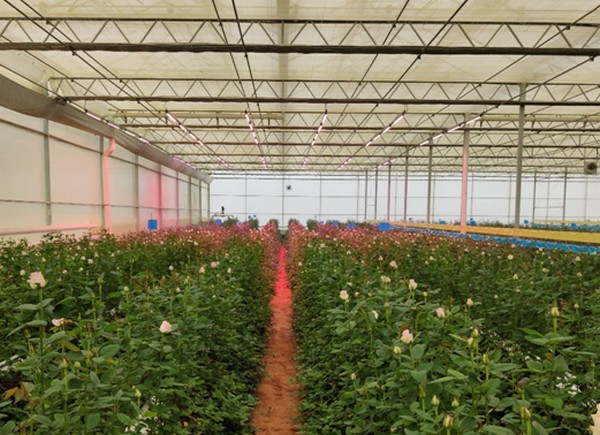 The experiment started on 30th November 30 2020, until 28th June 2021. During which 4 cycles (rounds) of harvesting were carried out, observation and data were recorded accordingly. During the experimental period, the cumulative PAR (photosynthetically active radiation) in lit area and the control area is 4050 mol/m2 and 5417 mol/m2, respectively. Where the cumulative PAR was increased by 34% with LED (as shown in the figure below).

Effect of LED on development, growth, yield and quality of buds
The yield of cut roses comes from the flowering stems of the new axillary buds after each harvest. Compared with the control, the plants under LED had more new buds/shoot, with better growth, thicker stems, and dark green leaves.

Effect on vegetative shoots
In the production of cut roses, a certain number of vegetative shoots are maintained as bent shoots for providing assimilation products to the flowering stems. Compared with the control, there were more vegetative (bent) shoots under LED, with dark green leaves and better growth. This contributes more photosynthesis products to the whole plant, which promotes better plant growth and yield accumulation.

Quantitative comparison of yield and quality improvement
The results shown in the above pictures can be further found in the quantitative comparison based on data analysis. Combining the results of 4 harvest cycles, it showed quantitatively that both LED treatments shortened the growth cycle of cut roses, increased the number of new shoots, fresh weight of the flowering stems, and the flower size. for the vase life of cut stems, no difference was found between all their areas. Regarding the stem length, the percentage of stems above 80 cm increased under LED, indeed there was more A-level flower stems percentage in total harvest. The performances of the LED regular recipe and LED rose recipe are equally excellent. In terms of the two external quality indexes of stem fresh weight and flower circumference, LED rose LED recipe is even better. The quantitative comparison of each index is shown in the figures below. 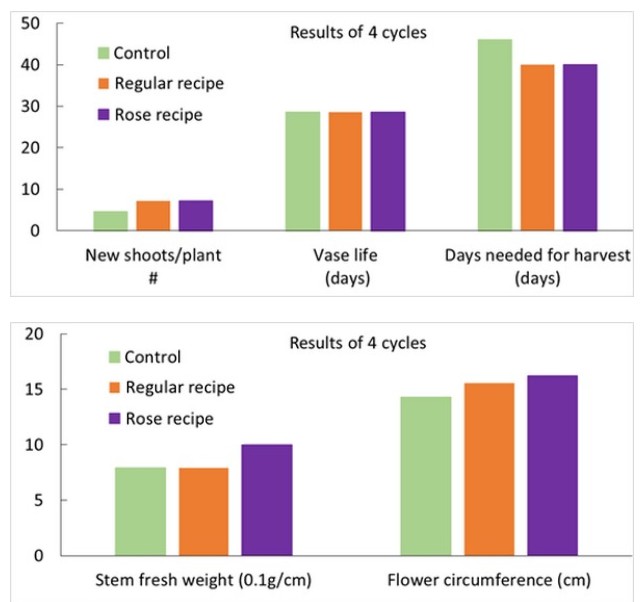 Effect on flower color
Besides the stem length and flower size, flower color is also one of the important quality indexes of cut roses. The picture below shows that the flower color became brighter and denser under LED, which greatly improves the ornamental quality of cut roses.

Conclusion
In summary, with LED supplementary lighting, the light environment is getting better, and crop photosynthesis is improved as well, which brings better dry matter accumulation. Sufficient dry matter production is essential for crop yield and quality, which in turn shows a better growth, higher yield, and shorter growth cycle, and better quality. A rule of thumb from Dutch growers is: 1% more light means 1% more yield. In this experiment, the light is increased by 34%, and the number of harvestable shoots increased by 58%. The amount of yield increase is much higher than the light increase, which apparently shows that the LUE (light use efficiency) of Philips LED is much higher than that of natural light. The results achieved in this experiment can also be provide as a good reference and suggestion of LED supplementary lighting for cut rose production in other regions of China.