Long before incorporating a new structure in the Philippines, substrate company Biogrow was already looking at how they could organize it as a sustainable development program, capitalizing on the experience and impact they had in Sri Lanka or India. "The production of high-quality coconut husk-based substrates is indeed really efficient at creating jobs for those who need it the most in remote, impoverished coconut farming communities", says Clément Jacquot of Biogrow Philippines. "Being labor-intensive at every step of the chain, we know that starting a new factory not only creates hundreds of direct jobs, but it also provides income for thousands of others involved in our extended network of supply. Those jobs are usually located in the countryside, and are not at risk of being relocated as they are intrinsically linked to the coconut production area."

"Being the second biggest coconut husk producer in the world, we knew that the Philippines had huge potential for development but we also knew that many in our field had already tried without much success. Challenges are important here: the weather, the typhoons, the earthquakes, interisland logistics, or lack of infrastructure in some remote places. But those things aside, starting a new industry alone from zero in a new place can take decades. So, we were on the lookout for solutions to scale up the process faster."

Luckily several governmental agencies in the Philippines like the DTI and the PCA had already tried to promote coir in the past and many small decorticating machines had been disseminated. Many cooperatives of farmers had already been organized to produce fiber and twines. "Unfortunately, the dependence on slowing local markets had brought difficulties to these projects, and the need for accessing international markets was evident. That would require better machinery to decrease production costs, more knowledge about the quality of all the products involved, and a strong international presence to guarantee the market", says Clément . "Thus, the role of Biogrow with our 25 years of experience in Sri Lanka, India, and Brazil was deemed essential." 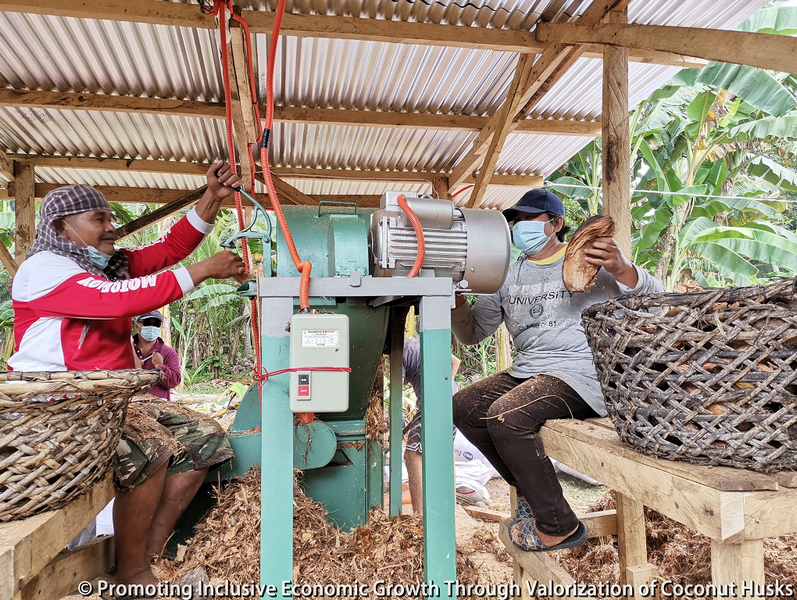 Collaborations and partnerships
In 2018, Biogrow decided to partner with a local NGO named IRDF (Integrated Rural Development Foundation), which was already successfully involved in several programs with coconut farmers in the south island of Mindanao and with Livelihoods Venture, a French foundation specializing in large scale projects around sustainable agriculture in emerging countries. Together, they designed and proposed a large-scale inclusive development program to DANIDA (the Danish agency of the ministry of foreign affairs, responsible for sustainable development projects in developing countries). The program was received with a lot of attention and eventually, a grant was approved to make it happen, starting in the fall of 2019. "Such a joint, market-driven project between industry, NGO and government programs requires a lot of dedication and adaptability from all the actors involved in order to align each other’s goals and practices. But it also gives a proven working framework for sustainable projects that would survive long after the end of the development budget", Clément explains. 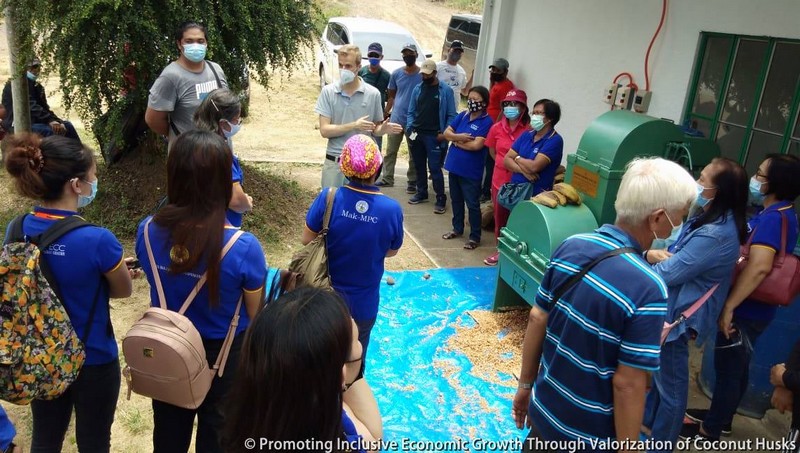 3000 small coconut farmers
The project’s ambitious targets were to reach more than 3000 small coconut farmers within 4 years, organize them into 10 cooperatives, train them and help them get the machines to start their own coconut husk transformation business, producing cocopeat, chips, and crush. All of this while promoting gender equality, decent work, good business practice, and getting the new generation into coconut farming and processing to reverse the aging trend of the farming population. Eventually, this would serve to tackle SDG8, SDG1, SDG5, and SDG17 of the UN Sustainable development goals.

To achieve many of those goals Biogrow and the project also invested in a dedicated training center that is acting as the central demonstration hub for getting people familiar with the machines so they can operate, maintain and draw a business plan for their future project. Batches of students from cooperatives and private ventures will join for several weeks of training both for hands-on experience using the machines and, in the process, learn about quality control, the way to establish proper supply as well as computing costs, and learning how to make the business profitable. Clément says it is a unique opportunity to proceed to a large-scale technology and knowledge transfer from Biogrow to the participants of the program.

COVID-19
"Now 2021 is behind us we can already begin to see the fruits of this ambitious project. Of course, the COVID-19 pandemic has impacted the progress, as well as created hundreds of other challenges, but at least 5 cooperatives have been able to acquire a machine already and start production to transform the husks delivered by the hundreds of members they are representing!" he shares the results. "We have been able to confirm with them that the business plans we prepared together were successful and will allow not only for the creation of stable jobs and new incomes for farmers but also to generate profit that can be reinvested for expanding their operation in coming years." Biogrow has also been able to establish direct links with hundreds of farmers to supply husks and is actively working at getting them involved in other activities like the drying of raw material.

"Today, the proof of concept and profitability has been achieved, so it’s only a matter of time until it will spread to more cooperatives and private businesses alike. We have also been working with the DTI RAPID program and PRDP program to help cooperatives invest in more machines and facilities for scaling up their operations."

International funds and grants
The Philippines has been the recipient of several international funds and grants from IFAD and the World Bank to help develop sustainable farming and improve the livelihoods of millions of farmers. Again, the project fits perfectly with these targets. "This has been an ongoing discussion for the past 3 years, as we really believe that government can play a crucial role in boosting the industry, going from solving very basic structural issues like roads and electrification to crafting more tailor-made programs that will directly support new businesses and investment. If we can get all actors pushing in the same direction, we have a chance to compete with established production countries like Sri Lanka and India who benefited not only from a long history in Coir production but also from strong support and intervention from government programs."

Thanks to their early successes, Biogrow has been recognized as an anchor firm for those government programs and Commercial Partnership Agreements have already been signed with their pilot cooperatives. This is a big step for them, with the ambition to grow from one single Chips Mill to a complete multi-product transformation hub. "What a pleasure it’s been to see those businesses starting up and flourishing under our guidance!"

Export started
According to Clément, the fact that the company has already succeeded in exporting containers within just a few months from the start of operations is very encouraging. "Even if the road is still long until we can reach a significant capacity, we are certain our efforts will eventually pay off. We also appreciate the chance that we have to positively change people’s lives by implementing such impactful developmental programs."

The end of 2021 has also brought good news for future developments as the program has been approved for an extension from DANIDA, which will both help consolidate the efforts done so far as well as introduce farmers with additional environmental protection practices and improve their resiliency towards climate change by helping them to develop intercropping and renewable biomass fuels. "The idea is to maximize land use but also to protect them from land erosion, especially in the mountainous area where we are working. Flash floods have been prone to cause landslides on lands that have been degraded by logging, mining, or poor management. We also want to help farmers to produce their own organic fertilizer on-site, so we have selected an array of trees with various agricultural values like Madre de Cacao which are nitrogen fixating, fast-growing, and from which leaves can be turned into a pest repellent and compost."

On top of that, the pruning of those trees every year for transformation into wood chips will help limit the wild logging of forests while providing sustainable and net zero-emission fuel to catch up with the energy needs due to industrial development. "We hope to really help these poor communities transition into being models and leaders of sustainable farming."

There's one thing the team is assured of: it is just the beginning! "We can’t wait to see how the local economy will have changed 5 years from now! So not only will our customers have the satisfaction of using environmental-friendly substrates, but now they will also know that by choosing Biogrow, they are also helping make progress on the protection of the environment, reduction of greenhouse emissions, and contributing to social progress in our countries of production."