LEDs or HPS for potted lilies?

Kralt Greenhouses Ltd. is a 3rd generation grower of potted and cut flowers located in Millgrove, Ontario, Canada. Starting in 1972, brothers Jerry and Peter joined their father Jacob in purchasing the property and have since grown it to over 105,000 square feet, with a new 14,000 square foot addition currently under construction.  The greenhouse is currently owned and managed by the father and son team, Peter, and Jacob, who have been operating it together since 2015 when Jacob took over for his uncle who retired.  Right now, their main crops are potted seasonal flowers such as lilies, spring bulbs, hanging baskets, and a variety of summer annuals as well as cut lilies, chrysanthemums, celosia, snapdragons, and asters which they distribute across wholesalers and retailers in both Canada and the United States. Additionally, during the summer months, they grow around 10 acres of field-cut sunflowers. 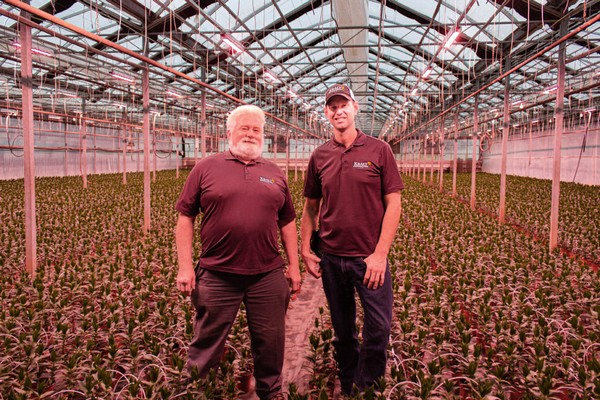 Winters are cold and dark in Ontario, which makes supplemental lighting essential to growing high-quality and consistent flowers – especially since some of their busiest holidays like Valentine’s Day and Easter fall in those months.  In fact, they have been using supplemental light for well over 30 years, and still use PL Light Systems legacy HPS luminaires in some areas of the greenhouse. 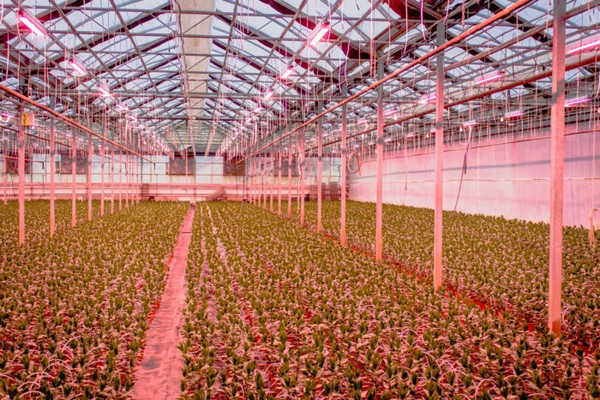 Switching to LED
Recently, they wanted to make the switch from HPS to LED and choose to install the HortiLED Top 2.0 RWMB (red/white/medium blue) spectrum. The LEDs were installed in the section of the greenhouse where they are growing seasonal potted lilies, which require 14 hours of light per day. To see how the lilies’ growth compares under the LEDs versus the HPS, the growers will be trailing some under the HortiLED Tops (at a light level around 106µmol) and some under their older HPS lights (which has a light level around 49µmol). What is interesting about this installation, is that even though the LEDs require more units per area compared to HPS - the LEDs were still able to reduce their overall electrical consumption yet increase their overall light levels by 115%!

Since they are accustomed to growing under HPS, some environmental factors such as temperature will need to be adjusted to make up for the lack of radiant heat emitted from the LEDs.  But that does not worry them since they still save more money in electrical costs by using the LEDs versus having to heat the greenhouse a little more. In fact, they strive to be as sustainable as possible when it comes to growing and heating their greenhouses with waste wood and biomass products, which helps to naturally reduce overall heating costs. To also help with costs, they will be receiving the Ontario Hydro Save-on-Energy incentive for their LED purchase.

For almost 5 decades the growers at Kralt Greenhouses have been innovating to keep up with changing consumer demands while remaining as sustainable as possible.  It is exciting to see all the new developments and growth happening at their greenhouses, and if you would like to find out more about them you can visit their website at kraltgreenhouses.ca.