In the last decade, interest in LED lighting among chrysanthemum growers has increased considerably. Initially in hybrid lighting systems with LED lighting supplementing the existing HPS lamps, but recently also in full-LED systems. There are still many questions on which light spectrum is the most suited for chrysanthemum, especially when it comes to realizing the desired stem length.

Growers fear that, especially in winter, chrysanthemums grown under LED lighting remain too short at low cultivation temperatures. Therefore, research was conducted at the business unit Greenhouse Horticulture of Wageningen University & Research into the effect of spectral composition of the light on chrysanthemums. The research focused on the options to control stem elongation with far-red light. 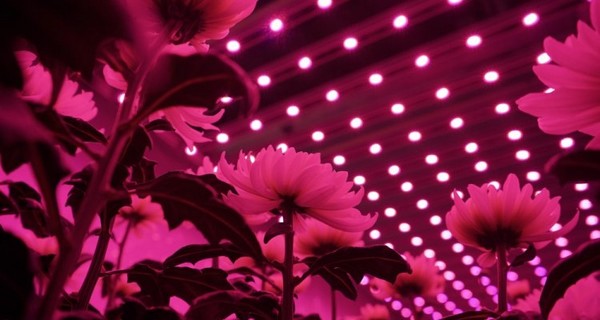 Good quality flowers
In Autumn 2021, four chrysanthemum varieties were grown under full LED supplementing the available sunlight. Winter conditions were simulated during the trial by allowing the share of sunlight in the total light sum to be 22% and the share of LED light in 78%. Results showed that chrysanthemums can be grown well under full LED. All varieties (Magnum, Baltica, Chic and Pina colada) reached the commercial stem weight, and the quality of the flowering shoots was good. Seven light spectra were tested, which differed primarily in the proportion of blue and far-red light.

Stem elongation
The most striking result was the stem elongation in the treatment in which the day was extended for 30 minutes with 20 µmol/m2/s far red light (EOD, end of day treatment). Stem elongation was already observed after two weeks, and resulted in longer flowering shoots in the three truss varieties. This was despite the fact that plants in this treatment were sprayed twice with growth retardant, in contrast to the other treatments, which were sprayed only once. When far-red light was used to supplement light throughout the day, there was hardly any effect on stem length. Furthermore, the light spectrum also affected development rate of the flowers. On average, flowers of the EOD FR treatment were harvested two days earlier than the reference RGB (5% blue, 5% green and 90% red light). Stem weight was not affected.

Follow-up research
This research shows that stem elongation in chrysanthemum can be controlled by light spectrum. Using a low-intensity far-red light for half an hour at the end of the day results in longer flowering shoots without (much) additional energy. These results still leave us with some questions on the use of end of day far-red light: should it be given for half an hour, or can it be less? Would it be sufficient to give the EOD far-red light only in the first 2-3 weeks of cultivation? What intensity of far-red light is needed? These questions should be answered in next trials.