Gerberas are harvested by picking them: the grower pulls on the flower, causing the stem to loosen from the plant. But for a harvesting robot this is not the best way of working, the Business Unit Greenhouse Horticulture of Wageningen University & Research discovered. For a robot, the best method is to cut the stem by using a gripper with scissors. The harvesting robot for gerberas will be further developed this year.

The demand for harvesting robots is increasing, mainly because it is becoming more and more difficult to find enough good cultivation employees. That is why WUR is developing a harvesting robot for gerberas. One of the robot’s main parts is the end-effector: the part that harvests the flower. For the end-effector there were roughly two options: picking or cutting. 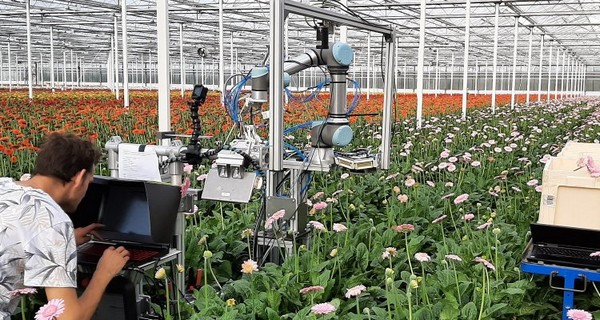 Picking or cutting
When picking, the end-effector pulls the stems out of the crop. The advantage is that this way the complete stem is harvested, leaving no residues behind. The tricky part, however, is that the robot has to pull in exactly the right direction to avoid damaging the crop. When cutting, the gripper is equipped with a small pair of scissors. The end-effector should be lowered as far as possible, to only leave behind as little stem as possible.

WUR research shows that for a harvesting robot cutting is the best method. When a stem is detected by the harvesting robot, the arm with the end-effector moves towards the stem and then moves downwards. The end-effector stops descending when it meets resistance: a sign that the ground has been reached. At that point, the end-effector cuts the stem. Only a very small piece of stem remains behind. Based on various trials, this does not lead to any issues in the crop.

Development
The harvesting robot will be further developed this year, with developments including speed improvement of the end-effector and improved stem detection. When the prototype is ready, WUR will co-operate with a machine builder to further develop the robot until it is ready to go to market.

The gerbera harvesting robot research project is a public-private partnership financed by the Gerbera crop cooperative and the Topsector Tuinbouw & Uitgangsmaterialen.