The widespread flooding in South East Queensland has forced the closure of the Brisbane Produce Markets over the weekend, with many traders struggling to make alternate arrangements to sell, or even store, their fruit and vegetable produce.

In a statement on their website, the management of Brisbane Markets Limited asked wholesalers and fresh produce companies not to attempt to access the markets until further notice, with water inundation expected to reach eight metres (AHD), around one metre lower than the 2011 floods, with water covering the Central Trading Area. Personnel is on-site who have implemented our flood management plan to ensure that critical services and infrastructure can be reinstated once floodwaters start to recede.

Drone photos taken, and published on the Produce Oz by Jensens Instagram page shows the extent of the water levels at the markets, with water covering the entire wheels of some of the trucks, with the entire site covered by floodwaters. 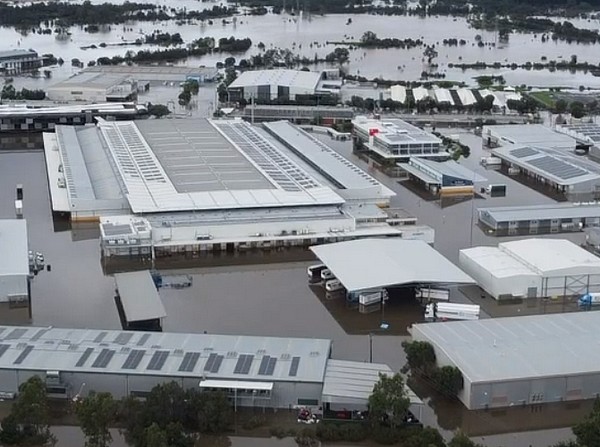 Drone Images of the Brisbane Market floodwater provided by Produce Oz by Jensens. For more images, or company information visit the Instagram Page.

Another company which calls the Markets home is Produce Art, and Director Rohan Bicknell says water levels inside the market haven’t subsided at all today even though the sun is out. He mentioned there is still no sign of when operations may be able to resume, or the clean-up to begin.

"We have been told that we cannot get in until further notice, it hasn't relaxed at all from what we know," he said. "I, like many others, have produce stuck in warehouses that are flood affected, and in turn without cool storage due to a loss of power in site. There will be some really bad losses. I don't know exactly, but I don't see it improving for the next week or two. If the markets aren't open, there are not really any other points for produce to be sold in Brisbane or distributed, unfortunately. We're facing the fact that people might just have to deal with the shortage of fresh produce for the short term."

Some other wholesale businesses at the markets have set up 'satellite sites' in other parts of the city to be able to sell a select range of their produce, where possible, while others have had to send produce interstate to Sydney, with external storage facilities starting to fill up. Mr Bicknell added that for Produce Art, it was a scramble to be able to sell produce that was just able to arrive in the city today.

"Fortunately, we have been able to work around it and use some of the freight forwarders that aren't affected and able to load out of their sites and also we have redirected a lot of our freight to Sydney," he said. "I know one severe fact is that all of the produce that was due into Brisbane has meant storage is starting to fill-up to the max in external sites not flooded effected. We have basically been requested to move all of our produce in those locations to help other people who might be stuck. For example, we had some avocados coming down to the market and instead of selling some domestically and some export, we have had to make the call to export everything just to help storage levels. Even Sydney Markets are filling up with the overspill of what cannot be sold in Brisbane. The same thing could even be seen in Melbourne in a couple of days, we don't know." 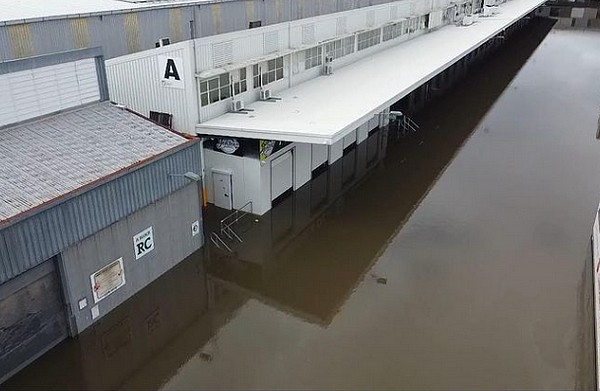 Drone Images of the Brisbane Market floodwater provided by Produce Oz by Jensens.

The rain not only affected the Markets and Brisbane CBD, with surrounding regions to the north and west put on flood watch and highways closed, as far as Bundaberg and the Sunshine Coast in the north and past Toowoomba in the West, including the Lockyer Valley, which is home to many fruit and vegetable farms. The Austchilli Group advised on their social media pages that there would be delays in produce that was meant to be shipped interstate and overseas due to the Bruce Highway being closed near Gympie, north of Brisbane. The road re-opened to priority travel this afternoon, but there are still expected to be some delays.

Meanwhile, the Queensland Government has announced jointly funded Disaster Recovery Funding Arrangements (DRFA), with the Commonwealth Government, to 17 local government areas in South East Queensland as a result of the torrential rainfall. Severe flooding is even stretching as far south as the Lismore region in Northern New South Wales. 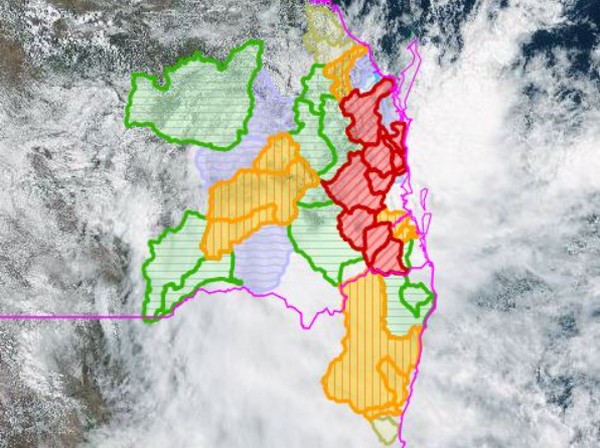 The Australian mango season is in its final weeks of the season, and while there may be some impact to the supply chain, most growers have now finished with small volumes of late-season varieties being picked in the region. But the peak mango industry body is reaching out to growers who may have been affected.

"Australian Mango Industry Association (AMIA)/Australian Mangoes is aware of the significant weather event in South East Queensland (SEQ) and Northern New South Wales (NNSW)," an AMIA spokesperson said. "Our thoughts are with anybody affected by this weather and we urge anybody in the mango industry affected to stay safe, listen to updates from emergency services, and seek help if they require it."

While the rain eased throughout Monday, there are isolated rain events and thunderstorms forecast over the next few days and flood warnings will remain in place. For the latest, visit: www.bom.gov.au/qld/warnings.