Martin Stolze Group has gone through years of growth and investment. ‘Lots of new talent joined Martin Stolze and it is great to see the mix in age and background make joint progress so quickly’, says Wido Kruijswijk, Technical Director and General Manager at Martin Stolze.

As with every dynamic and growing organization unfortunately in certain occasions, talent can also leave the company. Bram van Paassen, who worked for Martin Stolze for 7 years, and in his recent role as commercial director, has decided to follow his dream and to become an entrepreneur. After a short break, he will start at BOL ‘specialist in substrates’ on July 1st. ‘It has been great to be part of Martin Stolze where I gained so much experience which enables me now to make the next step and to follow my dream‘, says Bram van Paassen.

In order to ensure the future growth of Martin Stolze both locally as internationally the group has taken recent period to prepare for Bram’s succession thoroughly. At the end the perfect candidate turned out to be already present within the Kind Technologies group, making the transition as smooth as possible.

As of 1st of April, Richard van de Waart will assume the position of Commercial Director at Martin Stolze. He will also join the management team besides Wido Kruijswijk (Technology / GM) and Laura Diepeveen (Operations).

Richard has been active in horticulture his whole life having been a grower himself for a long time. After that experience and having lived two decades in Central Eastern Europe he has been active in Sales in North America and other regions on behalf of KG Systems, Paul Boers and at Luminaid. At Kind Technologies Richard led the overall sales discipline targeted at further international growth.

‘I am looking forward to work with the ambitious team at Martin Stolze towards the next phase of growth and professionalization’, says Richard van de Waart. ‘In the recent year I have already worked closely with Bram and the sales team and have been involved in the expansion of our direct and indirect sales group. We see many opportunities for international growth by expansion in specific regions with dealers and service partners as well as by introducing new products and technologies.’ 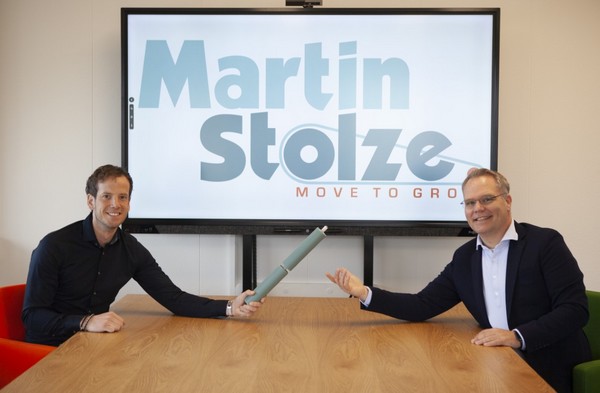 Bram passing through the baton, or in this case the famous Martin Stolze role, to Richard.