"Chinese horticulture much more than production only"

Horticulture in China is constantly evolving. Take the Pinduoduo competition for instance, which can be compared to the WUR’s Autonomous Greenhouse Challenge. Ridder is involved in that project as a technology partner. “They’re trying to create an autonomous greenhouse, which offers opportunities to universities and startups,” says Fulco Wijdooge, general manager at Ridder in China.

Such a challenge is fun and exciting, but it’s also hard work, he says. “The challenge is now held for the second year, and it’s going well, but it is an intense competition, where the technology of the future is on show: from vision technology to new algorithms. The participants are introducing all sorts of new techniques. And it’s great to see that so many companies are interested.” 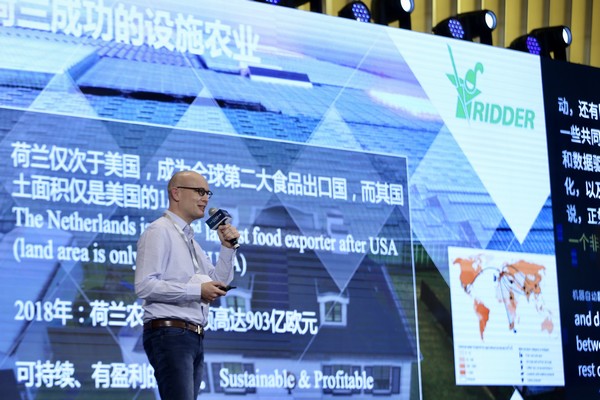 Ridder is the technical partner of the Pinduoduo Smart Agriculture Competition which is held for the 2nd year and will end in April. Here Fulco presents a speech on digitalization and autonomous greenhouses at a seminar at the launch of the competition.

Experience
The horticulture industry is also visible in other ways in China. People can literally experience, see, taste, touch. “A good example is the various agriculture theme parks. It’s really a day out for the whole family, and people enjoy seeing how cultivation is actually done. It’s really an experience. And one that can generate income. In the Netherlands, growers only look at production, but in China they also have entire theme parks. You shouldn’t focus only on production. If in the end it helps the industry reach a higher level, that’s just great.”

Government
The government also plays an important role in advertising the sector. “They’re really the driving force. The government is very aware of the bottlenecks here. That’s why indoor cultivation is also a part of the new five year plan. With various measures, investors are stimulated to finance horticulture, and the government itself is also an investor. In addition, government companies themselves also do a lot of work in the sector.”

The Chinese government also looks at things like energy prices and alternative energy sources, Fulco says. “They look at giving companies a boost, as well as making sure the environment remains livable, using the carrot and stick method.”

2025 is an important reference point for Chinese horticulture. The idea is that more will be done locally by then, which is why companies are asked to settle in China and to produce there, and local companies should also do more themselves. “That can be a threat if you only import from the Netherlands. There will be a point where that will become increasingly difficult, because of the rise of local producers.”

Better together
Fulco isn’t facing that future alone. “You shouldn’t try to reinvent the wheel all by yourself. In general, companies are great at working together within the Netherlands, but abroad it’s a bit more difficult finding each other. That’s why we do a lot of networking to become better together, for instance with FoodVentures, Partners for International Business and the Dutch Greenhouse Delta.”