The tulip that went wild: tracing back the origin of Tulipa Sylvestris

The Netherlands is known for its beautiful and colorful tulips. Though most tulips originate from the Ottoman empire, Tulipa sylvestris, the wild tulip, followed a different path. Anastasia Stefanaki and Tinde van Andel, both botanists at Wageningen University and Naturalis Biodiversity Center, and Tilmann Walter, historian at University of Würzburg, tried to trace back the exact path of this special tulip.

The wild tulip can refer generally to a tulip that grows wild, but it is also the vernacular name of Tulipa sylvestris. ‘We wanted to find out who brought the first Tulipa sylvestris to northern European gardens, when this happened, and where the first wild tulips came from’, Stefanaki explains. For this, they screened original sixteenth-century Latin botanical writings, personal mail correspondences, archives, dried plant collections and illustrations. 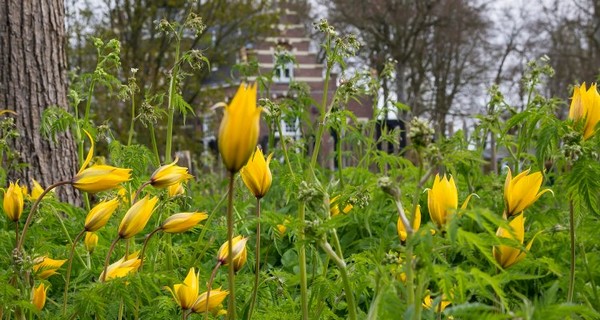 Status symbol
The sixteenth century was a "golden age" for botany. Plants were no longer seen only as sources of medicine, and an interest in ornamental plants emerged. Having rare and exotic plants in your garden was a sign of power. Often, plants were brought as curiosities and precious gifts to noblemen and royalties in the hope to seek new, or strengthen existent, links in the higher ranks.

In this context, the tulip was a flower of unprecedented beauty for sixteenth-century Europeans, and everybody wanted to have it in their garden. Once in northern Europe, tulips started to circulate among botanists and their rich friends with gardens.

The wild tulip
‘Unlike the tulips we have in our gardens today, which originate from bulbs that were brought from the Ottoman empire, the wild tulip came from the Mediterranean. The first Tulipa sylvestris bulbs that reached northern Europe came from Bologna, northern Italy, and Montpellier, southern France’, Stefanaki tells about their research findings. 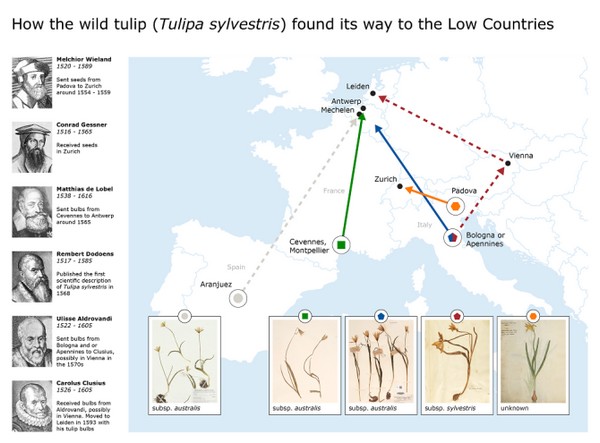 Letter from Clusius to Camerarius
Unlike garden tulips that came from the Ottoman empire, Tulipa sylvestris did not stay in the garden, it escaped and became widely naturalized. Today it grows wild in much of Europe, as a result of its introduction during the 16th century. This letter from Carolus Clusius– dated 30 July 1577, Vienna - provides the first evidence of the naturalization of Tulipa sylvestris. Clusius, the most influential man in tulip history and first director of the Leiden Hortus, sent in 1577 several tulip bulbs to his friend Joachim Camerarius in Nurnberg, Germany. In the accompanying letter, Clusius referred specifically to the tulips from Montpellier and Bologna. This is a clear reference to Tulipa sylvestris, Montpellier and Bologna being the two main places of origin of Tulipa sylvestris. Clusius says that these tulips shouldn’t be mixed with other tulips and that they should be put apart in the garden and restricted with bricks and tiles otherwise they tend to escape and expand to the whole garden.

There were various introductory events of the wild tulip in northern Europe throughout the second half of the sixteenth century, and several famous botanists were involved. ‘From there, the tulip went wild. It started escaping the gardens, producing lateral offspring via its stolons. Not all plant species have this ability to spread by vegetative means.’

‘Considering the places of origin of these early bulbs, we realized that different subspecies of Tulipa sylvestris have been introduced to northern Europe’, she points out, ‘and we should therefore reconsider the currently accepted taxonomy of this species.’ These findings highlight the importance of botanical history in understanding the complex taxonomy of naturalized cultivated plants that have a past of introduction.

Complex taxonomy
Their next research focuses on further investigating the taxonomy of Tulipa sylvestris. ‘We will do DNA- and morphology analyses of wild tulips collected from historical Dutch gardens and wild localities around Europe, including Italy and France where the first bulbs came from’, Stefanaki says. ‘We aim to clarify the complex taxonomy of Tulipa sylvestris which has long been controversial and find out where in Europe this beautiful wild tulip is really native.’