The impact of Calonectria diseases on ornamental horticulture

Diseases caused by fungi in the genus Calonectria pose a significant threat to the ornamental horticulture industries in Europe and the United States. Calonectria spp. are particularly challenging pathogens to manage in ornamental production systems and the urban landscape for multiple reasons. A high level of species diversity and poorly resolved taxonomy in the genus makes proper pathogen identification and disease diagnosis.

Currently, Calonectria spp. are causal agents of important diseases in tropical and subtropical climates around the world. They are polyphagous and nonhost-specific fungi. In Australia, South America, South Africa, and Asia, these diseases cause extensive losses in forestry plantations. In the United States and Europe, these pathogens are responsible for many diseases on a wide range of ornamental plants.  Impact of Calonectria Diseases. Symptoms included leaf spot; crown, collar, and root rot; stem lesions; and shoot blight . As a consequence of these infections, plants can show wilting, stunting, chlorosis, or defoliation. 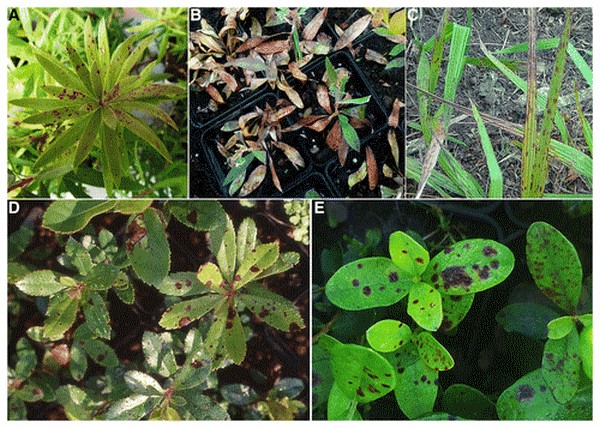 In ornamental nurseries, infections start at early stages of seedling and cutting propagation in the greenhouse (Fig. 3A), leading to severe economic losses. Swelling and cracking of necrotic areas at crown or basal stem level may develop into basal stem canker. Leaf spot symptoms caused by Calonectria spp. vary according to host species, host age, and pathogen species. Generally, they consist of small, water-soaked spots that are brown, red, or purple in color, which eventually turn light to dark brown with age and are surrounded by a red, brown, or purple border and chlorotic halo.Symptoms of leaf spot often start at the leaf tip and, under conductive conditions, the entire leaves become browned or blackened. Moreover, characteristic black, elongated streaks or cankers can begin to appear along the axis of the shoot following infection within a single season.

The large number of described species observed in the genus Calonectria and the emergence of new pathogen species such as the causal agents of boxwood blight suggest that Calonectria diseases will continue to be a challenge for ornamental horticulture industries in Europe and the United States.