While the 'traditional' horticulture sector in Thailand is developing at a kind of a slow pace, there is a crop that is gathering a lot of interest: cannabis. "Currently, medical cannabis is booming," says Wim Damsteegt from Dutch Greenery.

Thailand like North America
The only Asian country that legalized cannabis is experiencing the Green Rush, according to Wim. At the start of the regulated industry in North America, many companies and investors rushed to build as many cultivation facilities as possible, filling them with fancy and expensive equipment. It all went alright until reality bit back: lack of skilled labor, awkward implementation of cannabis culture into corporate culture, and low-quality production meant that many businesses had to shut down. "Thailand is in this phase right now," Wim says. "Here too, there are some speculators investing substantial amounts of money into building greenhouses in the hope of making a quick buck. The question is, will they be able to run them and make them profitable?" History has shown that only some of them will. 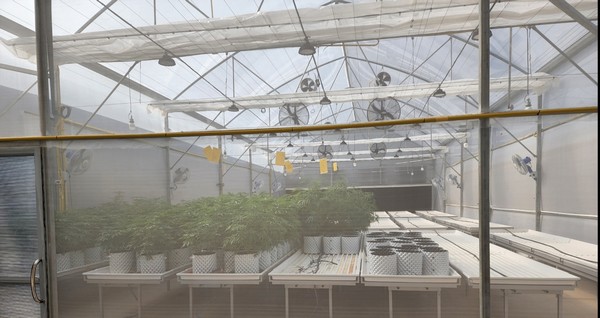 The issue with that approach is that, mostly, employees and workers will pay the price of someone else's poor choices. On top of that, local growers would also have more difficulty getting into the industry. "Big companies with big money will get all of the Thai cannabis industry, and local farmers who have the knowledge but don't have the financial means will be left out," Wim points out. "Being a highly valuable crop, cannabis can absolutely help farmers earn some more money, benefitting the industry from the bottom up."

Also a 'gardening' rush
Cannabis boom aside, the pot plants sector is currently going very strong. "There are quite some projects in pot plants at the moment." Wim continues. Also, in Thailand, the corona pandemic meant that man people spent more time gardening, driving sales of pot plants to an all-time high. "There has been just an outrageous amount of money in this segment, but now things have calmed down a lot." Regardless of that, pot plants are still trending to the point that it seems as if there are more of those than vegetables. "This is also due to the fact that the energy crisis and the higher fertilizer costs are preventing the vegetable sector from fully recovering after the pandemic."

Seizing the cold weather veggies sector
It is also crucial to consider that most of the vegetables grown in Thailand are local and are meant for local consumption. Crops such as tomatoes, peppers, and cucumbers, are not much consumed there, and these are mainly meant for hotels or restaurants for Western tourists. "There are some vegetable projects going on, as everyone has to eat, but the market for high-end vegetables is still trying to recover," Wim points out. "That's a pity because the country is expecting around 40 million tourists coming over.

The funny thing is that most Western tourists expect to eat the same things that they usually eat." A good case study for Thailand can be Malaysia and Vietnam, according to Wim. "They too eat their own traditional produce, but they also consume a lot of western vegetables, which are not completely dependent on foreign tourists. On top of that, they also have a lot of high-tech farms that work with supermarkets and restaurants. There's that untapped potential in Thailand, and it would be nice to see this happening, next to the medical cannabis boom."