Looking back on the 29th edition of Flower expo Poland

On September 1-3, the International Exhibition GREEN IS LIFE & FLOWER EXPO POLAND 2022 was held in Warsaw under the slogan "Naturally!". In times of uncertainty and unpredictability, it proved to be a reliable venue for industry gatherings – on a consistent, unchanged late-summer timeframe, which is favorable for presenting garden plants and greenery as well as arranging mass events such as trade fairs. The organizers – the Polish Nurserymen Association and the Agencja Promocji Zieleni (Greenery Promotion Agency) – emphasize the stable, strong position of the exhibition, built up for almost thirty years and confirmed during this year's edition of the event, which was visited by about 9,500 people from Poland and abroad. 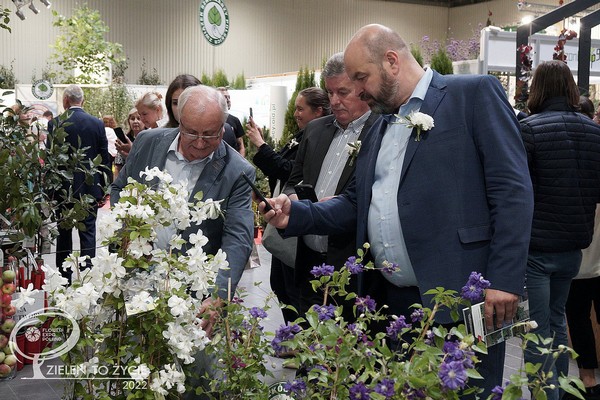 Exhibitors – regular, new, returning
One hundred fifty-six exhibitors from 9 countries: Poland, Belgium, Denmark, France, Germany, Italy, the Netherlands, Lithuania, and the USA, took part in the fair. As usual, plants for gardens and landscapes comprised the core of the exhibition (almost 65% of the participants showed them), but a larger area than that of the last year's was taken up by stands with means of horticultural production, such as machines, equipment, pots, etc.

About 23% of the companies presented their offer here for the first time or returned to the Warsaw exhibition after a break of at least 3 years. At the same time, there were nurseries that did not miss any edition of the "Green is Life" exhibition, having placed it for good in the calendar of their most important business activities. 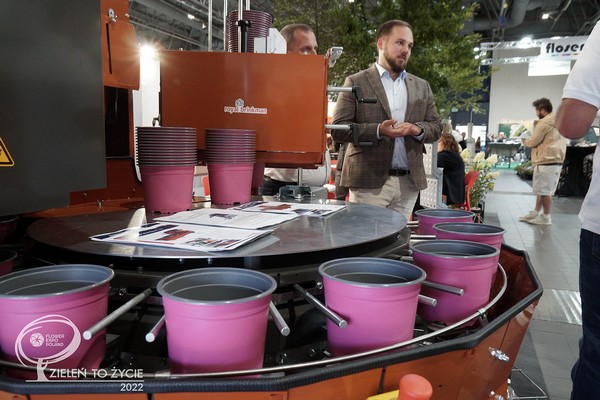 Collective expositions were characteristic this year – including those representing the region of production and/or announcing the wholesale nursery stock fair to be held in the late fall of 2022. Some suppliers made their presence at stands of companies with which they cooperate on a daily basis, so there were actually more brands at the fair than the number of exhibitors would indicate.

Traditional prizes (Laurels) were granted – in two categories – for the most attractive displays and the best ones in terms of the marketing strategy. The recipients of the most valuable, Golden Laurels were Kurowski Nurseries (category "Plants") and ICL ("Technology"). 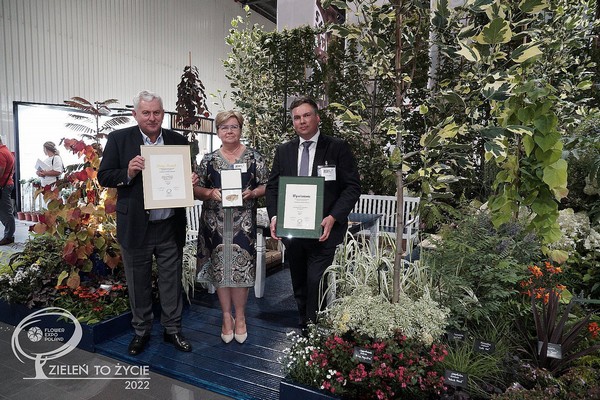 Must-see for visitors
The exhibition was visited by around 9,500 people, of which 4,948 were trade visitors. "This time, most of the professionals showed up on the second and not – as in other years – on the first day of the exhibition, which may have had to do with the inauguration of the school year in Poland on 1st September", admits exhibition director Joanna Filipczak. "However, this did not affect the overall turnout and the interest of the visitors," she adds.

The majority of the industry visitors represented the management of companies that operate in the green business, with the owners of these enterprises dominating. In terms of professional profile, the largest group comprised plant producers (30%), followed by people associated with: landscape architecture or garden contracting (22.5%); retail sales – garden centers, garden stores, DIY or supermarkets (13.5%); administration, municipalities (11%).

The visitors came from 25 countries. Most foreigners arrived from Lithuania, Latvia, the Netherlands, Romania, Estonia, Serbia, Slovakia, and the Czech Republic.

The interest in the exhibition was also generated by its accompanying events, such as the "Knowledge for Traders and Growers" seminar (held on Day 1 and attended by 262 people) as well as the Green City conference (attended by 419 participants on Day 2).

Extended reach, larger audience
Those who were unable to make it to Warsaw on September 1-3, could follow the video coverage of the Trade Fair Studio, which operated for the second time during the Green is Life exhibition. As of September 4, 2022, 6045 viewers had watched it on social media and YouTube (the number has been steadily growing as the recording is available online). The streaming from the Green City conference was followed by 1782 people from Poland and abroad.

The time that needs exhibitions
The atmosphere of this year's exhibition was different from the previous one. "September 2021 featured the great joy of the meeting, after pandemic restrictions and the long break", recalls Joanna Filipczak. The positive mood was also driven by the extraordinary boom in the green industry and good prospects", the director of the exhibition adds. This year, the demand for plants is lower but comparable to that in 2019; however, nurserymen and retailers have obvious worries about the future", J. Filipczak concludes. 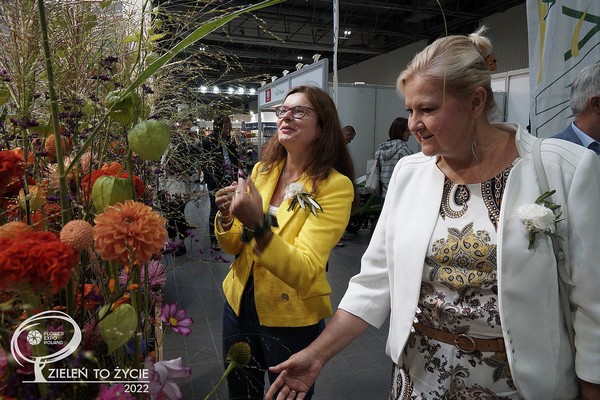 As usual, the business talks at the Green is Life exhibition were mainly about the products sought and orders to be placed. "Conversations at the booths were concrete and satisfying. At the same time, they helped strengthen trade relationships, which is particularly important in periods of market turbulence and uncertainty", assesses Joanna Filipczak. Therefore, the 2022 meeting of exhibitors and visitors in Warsaw contributed more than before to evaluating the market situation, exchanging opinions, formulating problems, expressing concerns, and looking for solutions and new ideas, which are easier to come up with in conversations with other industry members.

The special role of regular customers was discussed at the "Knowledge for Trade and Growers" seminar by the highly respected speaker Erwin Meier-Honegger from Switzerland. His lecture was entitled "Options for garden center business models in the new digital environment." His most important message for retailers was, however, the advice not to copy global "mandatory" solutions but to focus on plants, quality products, and traditional excellent service, as well as on authenticity in dealing with customers – the tools of the digital era are only one of the options to choose from, not a condition for a garden center success.

Regardless of looking for reserves in the domestic market, a number of Polish nursery workers are in urgent need of new clients following the loss of Russian customers as a consequence of the war in Ukraine. Chairman of the Polish Nurserymen Association Wiesław Szydło points out that the participation in the 2022 Green is Life exhibition provided an opportunity to look for new export destinations, to establish contacts with hitherto unknown buyers, who this year came in quite considerable numbers from, among others, the Baltic States or from across the southern Polish border, but also from Romania and Serbia.

Traditions and innovations
GREEN IS LIFE & FLOWER EXPO POLAND 2022 became an occasion to celebrate jubilees by a few exhibitors. The 40th anniversary was celebrated by the two-generation Szmit Nursery (Szkółka Szmit), known for its wide range of ornamental plants, including many rarities. Thirty years of the breeding work of Szczepan Marczyński (more than 50 Clematis varieties) was highlighted by the nursery Clematis Source of Good Vines (Clematis Źródło Dobrych Pnączy Sp. z o.o. Sp.k.), which he founded together with Władysław Piotrowski in 1988.

Two companies celebrated their 25th birthdays: Agro-Sur, a manufacturer and contractor of turnkey greenhouses as well as of garden centers, and Chomik, which started with trading jars and in 2022 will offer an assortment of more than 10,000 items.

Care for tradition mingled with manifestations of recent trends, such as diversification of the plant assortment, the introduction of new production divisions, or sales channels (e.g., e-commerce, social media, own YouTube channel) by new generations of nurserymen, who co-manage the operations in the family businesses.

Plant Novelties Competition 2022
Organized for 14 years during the Green is Life exhibition, this competition has already developed into a brand in its own right. It attracts the attention of visitors as well as the media and effectively promotes the new plants submitted to it – especially the winning ones.

The Online Poll Winner, voted for by a wide audience, was Miscanthus sinensis 'Polonus,' entered into the competition by Daglezja Ornamental Plant Nursery Artur Maj.

Green City – the contemporary necessity
The Green City conference, which accompanies the exhibition and connects plant producers with landscape architects, green area contractors, and municipal officials, received a lot of attention. "When preparing the conference program, we always focus on specific examples, addressed to the audience, who want to learn, but also share their observations, achievements, difficulties," explains Joanna Filipczak. "The Green City conference is a forum for exchanging experiences, which is very valuable, especially now that the topic of greening cities and the implementation of this idea have become such an important issue," she adds.

Among this year's presentations, in reference to the exhibition's slogan and contemporary trends, lectures on natural plantings in urban spaces and the process of "removing the concrete" in cities are to be highlighted. The world-famous landscape architect Martha Schwartz from the US was the keynote speaker at the conference as a part of the Green Cities Europe program, which is implemented in Poland by the Polish Nurserymen Association. In her online presentation, "Cities of the future and the urban landscape," she confronted the audience with the drastic effects of global warming on the Earth and made people aware of how fast it is progressing. She testified that landscape architecture should play an essential role in mitigating further climate change and should be the starting point of any urban constructions or infrastructure projects. She stressed that no moment should be wasted. Green is life!