In recent years, interest in LED lighting among chrysanthemum growers has increased considerably. When choosing the LED lighting system, it is important to make a good choice with regard to the efficiency of the lamps and the right spectrum for the crop. When growing under full-LED, growers fear that the branches might remain too short in winter. Therefore, we are looking for possibilities to control the elongation of chrysanthemums with a light spectrum. 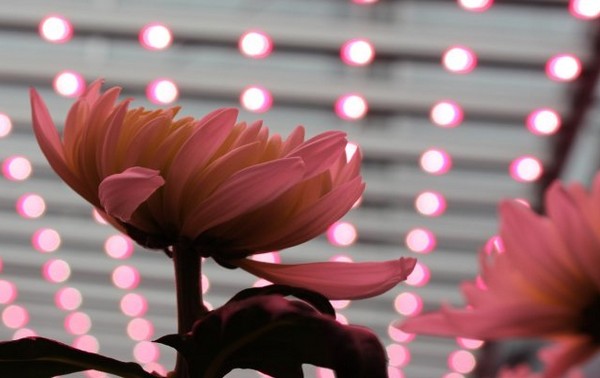 To answer these questions, the cultivation of four chrysanthemum varieties (Magnum, Baltica, Chic, and Pina colada) under 200 μmol/m²/s full LED in the Innovation and Demonstration Centre LED lighting (IDC LED) started in May 2022. “End of the day” far-red light duration was reduced from 30 to 20 and 10 minutes (20 mol/m²/s), and the intensity of the far-red light was reduced to 10 and 5 mol/m²/s (for 30 minutes). In addition, in the base spectrum, the percentages of green and far-red light were varied, and cultivation was carried out at a lower light intensity (100 μmol/m²/s) to reduce the energy consumption of illuminated chrysanthemum cultivation.

Per variety, per treatment, flower stems were harvested if they had at least five open flowers (Chic, Pina colada, and Baltica) or if the flower had opened sufficiently (Magnum). “End of the day” far-red light (30 minutes 20 mol/m²/s) resulted in longer flower stems compared to no “end of the day” far-red. Comparable effects were obtained if the “end of the day” period of far red was reduced to 20 or 10 minutes, as well as when the intensity was reduced to 10 or 5 µmol/m2/s. These results can be considered in choosing a lighting installation. Post-irradiation with far-red light further shortens the cultivation cycle by approximately two days but has little effect on stem weight, although visual inspection of the root systems of young plants (2 weeks after planting) showed that “end of the day” lighting with far-red resulted in more root growth at the start of cultivation.

These results were obtained at a light spectrum of 5% blue light, 5% green light, and 90% red light. When the proportion of green light is reduced to 0% or increased to 15% at the expense of red light, this appears to have virtually no effect on stem length, growth duration, or shoot weight.

These results show that chrysanthemum flowers can be grown under full LED very well and that there are sufficient possibilities with light colors to control the crop in such a way that high-quality flowers can be produced.

This research is funded by the Ministry of Agriculture, Nature and Food Quality, and Greenhouse Horticulture in the Netherlands within the program Greenhouse as an Energy Source, with a contribution to the lamps and their control by Signify.