Kok Aardbeien hopes to begin using its newly installed solar boiler this week. A little later than planned, but nicely in time before the weather really turns.

This solar water heating system for greenhouse heating makes these Dutch strawberry growers, who are also taking on a new greenhouse this winter, unique. When they asked, G2 Energy, the system's supplier, told the growers they were the only strawberry growers with such a system.

A good reason for them to tell their loyal buyers about this is through social media. "Our shoppers consider sustainability important and ask questions about it," begins Arjen Kok. "We like showing our commitment to that." 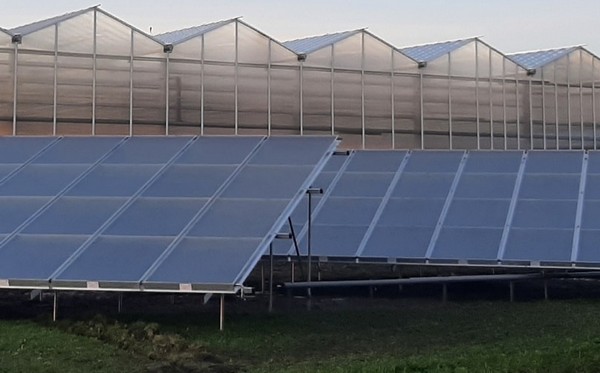 The solar boiler was placed adjacent to the greenhouse.

Seen at fellow growers
The solar boiler will help these growers save half their natural gas usage. They estimate that will perhaps be even more. "We have several sections with different climates. By running the water from the hottest part back through the colder ones, we use the heat twice. Optimal water recooling increases the system's efficiency too," says Arjan.

He and Esmeralda Kok got the idea from two fellow growers. "We're friends with Jeroen and Marco of Mol Freesia. They've been using this method, admittedly, on a larger scale, for three years now. They pointed out that it could also be something for us too."

Less heating
The deal was, thus, struck in November 2021. "We wanted to reduce our gas usage anyway. It turns out it was an especially good move, with gas prices skyrocketing. Without our solar boiler's heat, it would've been over and done for us as a small company. That's no lie. We can't afford heating with these gas prices," Arjan admits.

Installing this solar boiler coincided with building a new greenhouse to expand their greenhouse cultivation. This new greenhouse means the growers - who also cultivate open-field strawberries - will soon have 4,000m2 of greenhouses. "We asked the bank for financing for both the greenhouse and solar boiler."

They applied for an ISDE grant. And, though their patience was tested, it was finally approved. "We would've taken this step without that. But, now that the government wants us to use gas more economically, it's extra nice to have a bit of a grant to help with methods for that," Kok says.

Heat, even on cloudy days
The Prins Group built the new greenhouse. The growers largely did the interior themselves. "I just didn't weld the heating pipes. I'm not very good at that," Arjan jokes. Before commissioning the solar boiler, the existing heating system was slightly modified. "G2 Energy specializes in that and tweaked the system to meet our needs," he explains.

Remarkably, these solar boilers produce heat even on cloudy days. "I saw that at Mol Freesia too. It's unexpected, but the boiler's water is still between 30 and 40°C. That's a nice temperature for the heating pipes under the gutters. Also, unlike some other growers, we don't have to keep several hectares at the same temperature." 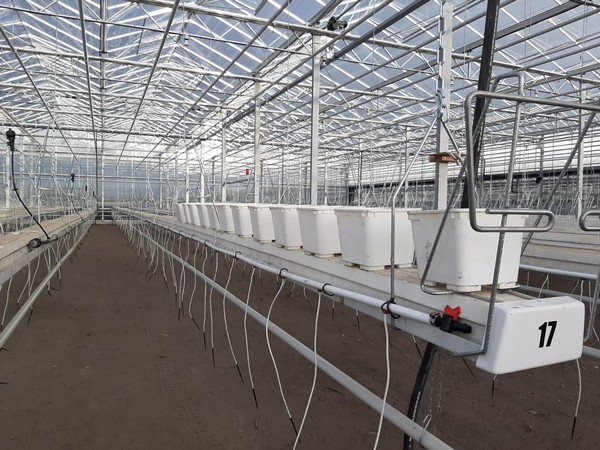 The growers installed gutters used for tomato cultivation in the new greenhouse. They flipped them, placing the strawberry plant containers on top.

Buffer
The growers currently only use a boiler to heat the greenhouse. "It stays on. On the one hand, to provide a little extra heating if needed, but also for CO2," says Arjan. They can buffer the unneeded heat in a specially-constructed tank. "It holds 80m3, which we can use for a few days. We may have another of these tanks installed, but we want to first test the current setup. We want to see, for instance, how quickly the tank fills up and what influence the weather has."

The new plants will go into the new greenhouse in December. "Right now, we're well busy harvesting in the existing greenhouse," Arjan concludes. The growers, members of Cooperative Coforta, offer differently-grown strawberries of different varieties from March through Christmas.