The market for hydrangeas is changing. "For many years, the same varieties and colors were grown, but nowadays, a grower needs to have hydrangeas with original flowers and colors", says Jean-Yves Coulbault, Sales Manager at Sicamus, French breeder and grower of finished and half finished products. Currently the demand for their new varieties is so high that it exceeds their supply. 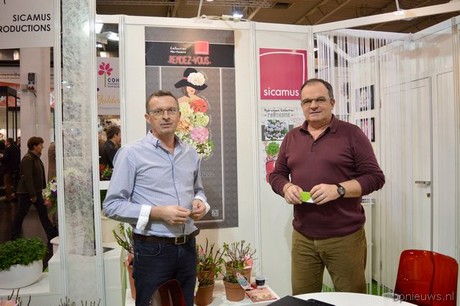 Jean-Yves Coulbault and Christophe Camus, President of Sicamus, at the IPM Essen 2016 in Germany.

Rendez-Vous collection
The main activity of Sicamus is producing half finished hydrangeas, but for over eight yeas now, Sicamus is also focusing on breeding their own special varieties. These varieties are included in their so-called Rendez-Vous collection, which currently consists of 60 varieties. "Over the years, we noticed an decreasing demand for the classic varieties, so we decided to breed our own, special, varieties", says Jean-Yves Coulbault.

Demand exceeds supply
Over the last three years in particular, JY Coulbault noticed a boost in the demand for their new varieties. "When we introduce a new variety in the Rendez-Vous collection, we often see a sharp increase afterwards. However, we are not always able to meet the demand as we have just one production cycle a year. So, in order to deal with this increasing demand for new varieties, we are decreasing the production of the classic varieties", says JY Coulbault. Moreover, some varieties are so demanded that they are reserved by growers. "We have some Dutch hydrangea growers that supplied us with a two year plan. In this plan, they list which varieties they need and when. Such a plan does not only ensure them of our varieties, but we also benefit from this, as we can better plan what to plant."

Half finished hydrangeas after cold storage.

Keeping prices up
But why aren't you expanding the farm to meet the demand? "Expanding the farm would enable us to supply the demanded varieties, but it also has a disadvantage which outweighs this advantage, namely the price for the finished product. If we put too many hydrangeas on the market, the prices will drop and everyone in the chain will be affected.''

Popular varieties
According to JY Coulbault, number one in the "Rendez-Vous" collection is the so-called Cocktail. "It is a strong and bicolor variety with white flowers with red edges. Another variety that is increasing in popularity rapidly is the French Cancan. It is a teller pink fuchsia colored hydrangea with large petals like butterfly. At the HTA show in London, this variety was awarded with a prize for original color and flower. For next year, we will increase the production by 50 percent."

New introductions
Lately, Sicamus has added twelve new varieties to the Rendez-Vous collection. And two varieties already received a lot of attention, namely the ''Angelique" and ''Mademoiselle". "The Angelique white has double petals and multi flowers on the same flower and the Mademoiselle has a special nice pink color, which is orange and pink at the beginning of its flowering phase." 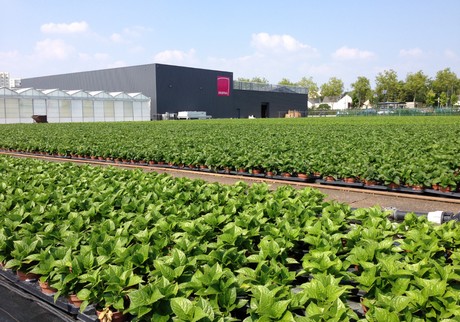 Production in full swing
The production of the hydrangeas is in full swing. Currently, the hydrangeas are being grown outdoors on their 35ha field in Angers, France. "Next to the Rendez-Vous collection, which consists of our own breeds, we also grow hydrangeas from Dutch breeders, in the "Dutch Ladies" collection, Japanese hydrangeas in the "You and Me" collection and repeating flowering hydrangeas in the ''Fantastik" collection. So, we have a large range including 10,5, 14, 17 and 21cm pot hydrangeas and big specimens of 10, 20 and 46 liters", says JY Coulbault. Annually, Sicamus produces 2 million plants. About 90% of the production consists of half finished plants of which about 80%, are being exported just after cold storage all over the world. The finished plants are being supplied throughout France.