Europe: The future of orchids - What will it bring?

A lot has been said about the orchid. In the course of 2017, prices decreased and it ended with much disappointment. That decline continued in 2018 and by now, in the phalaenopsis, one can cautiously speak of a crisis. About the cause everybody actually is in agreement; there are simply too many on the market. 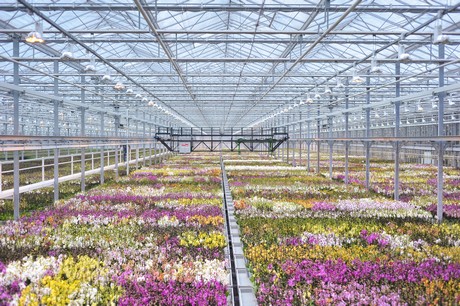 The Netherlands is one of the largest producers of orchids in the world. As far as the European market is concerned, 9 out of 10 plants are of Dutch origin. Every week, hundreds of thousands of plants are supplied, and for a long time this number continued to grow. At the same time, the acreage (from 770 ha in 2000 to 370 ha now, according to the CBS) and the number of parties (from 200 companies in 2000 to 60 companies now) continued to decline, which was mainly made possible by intensification of the cultivation.

This year the acreage grew strongly again, despite the fact that the adverse situation has been going on for more than a year now. You do not just cancel ongoing projects, and of course planned expansions neither. In a nutshell, what has actually been built in the past year?

New construction
We will undoubtedly have missed something, but a dozen hectares has certainly been added:

To start with, at the beginning of this year our Dutch colleagues of BPnieuws had a party at OK Plant. The grower, who focuses on the small 'Kolibri' plants, opened a new 2.5 hectares greenhouse.

At Opti-flor, they also was handed over a completed greenhouse of 2.5 hectare (in Dutch), recently.

A little earlier this year, in April, Verdel Orchideeën and Van Dorssen & French signed an agreement for the construction of a 1.5 hectare greenhouse (in Dutch). Verdel is one of the first breeders and has been growing orchids since 1987. The assortment currently consists mainly of specialties.

Just a week ago, Van Geel Orchideeën announced that they are going to invest heavily in renovation and 1 hectare of new construction. The grower, situated in Erica in Drenthe, already built a new greenhouse of 1.8 ha two years ago. The grower specializes in a wide range and color palette.

Then Hoog Orchids also joins in with 1 hectare. The grower, who focused on plants with four and five branches, indicated that they would particularly like to use the extra space to produce cuttings of higher quality.

To conclude, the largest new builder is Ter Laak brothers. The innovative Daylight Greenhouse of the International Grower of the Year 2018 measures 5 hectares and is almost completed. The plants are mainly produced in pot size 12.

Decline
Finally, were there also reductions? Growers often voice this presumption: there will be a few - and how many, that is uncertain – that will be closing the business or that (partly) (temporarily) will change to another crop. As far as we know, bankruptcy has until now been limited to 1 - Orchids4All. In addition, one other grower will close 1 nursery, namely Aphrodite Orchid. It concerns the greenhouse in Amstelveen, where phalaenopsis in 15 cm is grown.

Furthermore, nothing else can be confirmed officially for now.

Ceiling
The fact that the ceiling has been reached is clear, but opinions differ whether this will result in a definite decline or an increase of that ceiling.

The market will recover:
It concerns a substantial, painful, relatively long but nonetheless temporary dip. In other words, the way up might still be starting today. The adverse economic situation is due to disappointing weather conditions, the long and hot summer had a negative effect on consumer spending and also had a negative impact on quality and distribution.

It has recently been agreed to increase investment in joint marketing, but it was said just one and a half decade ago that the growth of that time could really not last much longer? There is still more than sufficient growth potential and in the neighboring countries comparable potential for cultivation is not becoming a reality. Did you know that France has more than 60 million inhabitants and not even 1 orchid grower of some (technological) size?

Then there is the thought that although large steps have been taken in the cultivation, there is still also much to be gained. 'I think that we do very many things really not well enough', one can paraphrase several breeders. People look for 'the limit' in terms of substance use, CO2, light and temperature, and that is not without risks. Moreover, it is a relatively new cultivation, about which is much less known than about the rose or chrysanthemum. That is why growers themselves can learn a lot more about it.

Finally, it may be that the market is facing a number of bankruptcies and that acreage will necessarily be reduced. That is painful, but if it is limited, it is also part of the solution. Because the phalaenopsis is a long and intensive cultivation, however, there is a delayed dynamic, which makes it difficult to estimate its size at this moment.

The market will not recover:
For exactly the same reasons that the way upwards will be found again, it will not be found. The dip lasts too long and a substantial part of the growers gets in trouble. Switching to another crop is not done just like that, because the complete (expensive) greenhouse set-up and automation has been adjusted to this one plant, and often even to a specific pot size. That is why one can say that acreage will be reduced, but in practice this will hardly be the case. The just-mentioned delayed dynamics would just indicate that what is now visible is only a beginning. To increase the marketing budget to turn the tide would also not make any sense, the consumer has had enough of it. It will also not depend on even heavier quality, more added value or even more branches. Finally, already there is no room for the smaller grower, let alone in the market of tomorrow; but the scale-size inversion has the risk that if things go wrong, they might go awfully wrong.

Conclusion
A real conclusion cannot be given, there is nobody who really knows. What will cause the consumer to opt for the plant again, or what has to happen so that the trade will at least pay the cost price?

In response to this, we encountered one vision which, if it were true, in our opinion could be a part of the solution. In an interview with the trade magazine (in Dutch), Lennard van der Weijden, director of orchid nursery GreenBalanz, said the following: "If there would be a better houseplant, I would be worried. But there just isn’t."

Across the border
"I think we never had such low prices for such a long period", says Christian Schwartz of Gartneriet Rønbæk when we ask him about the phalaenopsis. This Danish grower explains that 2018 has been a challenging year. "There was already an overproduction and the hot summer in Europe only made it worse. Now, prices are finally up a bit, but we have way fewer plants to offer than usual during this time of the year."

So how to move on in such a challenging situation? "First of all, we just try to hang on. We are one of the few phalaenopsis growers left in Denmark. We still think that the Danish people are eager to buy products from a local grower instead of importing them."

Daniel Pass of Double H Nurseries in the UK, however, isn’t complaining. “There is still an appetite in demand”, he says. “It is driven by more innovation into the product. In recent years orchids were made into a gift by using drop in ceramics. That was the best you could get. Now they are made into fancy shapes and dressed with lights and glitters.” Double H Nurseries supplies to UK supermarkets like Waitrose, M&S, Tesco and Sainsbury’s. Apart from Phalaenopsis they also supply roses and chrysanthemums.