Brassica rapa plants pollinated by bumblebees evolve more attractive flowers. But this evolution is compromised if caterpillars attack the plant at the same time. With the bees pollinating them less effectively, the plants increasingly self-pollinate. In a greenhouse evolution experiment, scientists at the University of Zurich have shown just how much the effects of pollinators and pests influence each other. 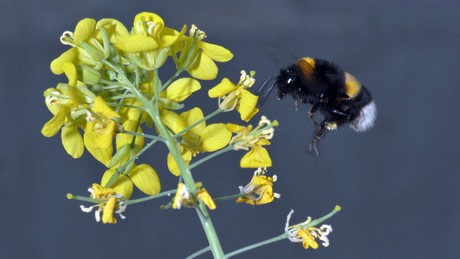 In nature, plants interact with a whole range of organisms, driving the evolution of their specific characteristics. While pollinators influence floral traits and reproduction, herbivorous insects enhance the plant’s defense mechanisms. Now botanists at the University of Zurich have investigated the way these different interactions influence each other, and how rapidly plants adapt when the combination of selective agents with which they interact changes.

Experimental evolution in real time
In a two-year greenhouse experiment, Florian Schiestl, professor at UZH’s Department of Systematic and Evolutionary Botany, and doctoral candidate Sergio Ramos have demonstrated a powerful interplay between the effects of pollinating insects and those of herbivores. For their experiment they used Brassica rapa, a plant closely related to oilseed rape, interacting with bumblebees and caterpillars as selective agents. Over six generations they subjected four groups of plants to different treatments: with bee pollination only, bee pollination with herbivory (caterpillars), hand pollination without herbivory, and hand pollination with herbivory. 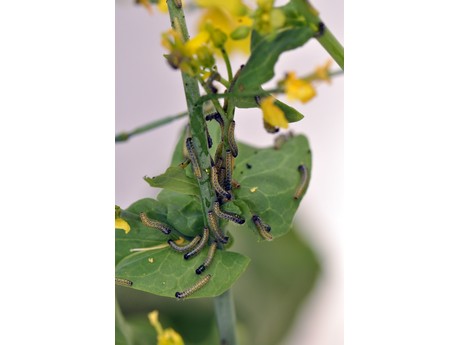 Balance between attraction and defense
After this experimental evolution study, the plants pollinated by bumblebees without herbivory were most attractive to the pollinators: they evolved more fragrant flowers, which tended to be larger. “These plants had adapted to the bees’ preferences during the experiment,” explains Sergio Ramos. By contrast, bee-pollinated plants with herbivory were less attractive, with higher concentrations of defensive toxic metabolites and less fragrant flowers that tended to be smaller. “The caterpillars compromise the evolution of attractive flowers, as plants assign more resources to defense,” says Ramos.

Combined impact on reproduction
The powerful interplay between the effects of bees and caterpillars was also evident in the plants’ reproductive characteristics: In the course of their evolution, for example, the bee-pollinated plants developed a tendency to spontaneously self-pollinate when they were simultaneously damaged by caterpillars. Plants attacked by caterpillars developed less attractive flowers, which affected the behavior of the bees so that they pollinated these flowers less well. 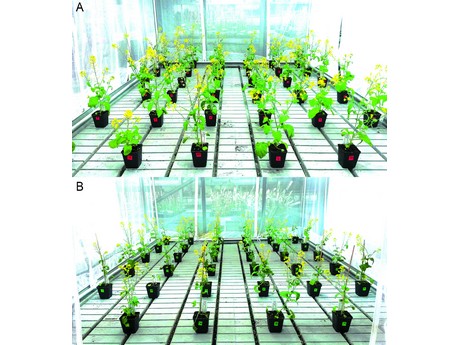 Brassica rapa in the greenhouse experiment without (A) and with caterpillar infestation (B). (Image: Florian Schiestl, UZH)

Better understanding of the mechanisms of evolution
The study shows the importance of interactive effects in the evolution of diversity. If the combination of selective agents changes, for example through loss of habitat, climate change, or a decline in pollinators, it can trigger rapid evolutionary change in plants. “The environmental changes caused by humans affect the evolutionary fate of many organisms. This has implications in terms of ecosystem stability, loss of biodiversity, and food safety,” says Florian Schiestl. He believes that an understanding of these mechanisms has never been more important than it is now.