Following on from the Automation Tour on the 17th & 18th September, Vas Agache shares some of the automation the British grower has seen.

At Baas, the growers saw a stand-alone packing robot. "It looked futuristic but was in commissioning phase so we did not get to see it run, unfortunately", Vas says. It should be able to produce 600 boxes an hour and costs approximately €36,000. 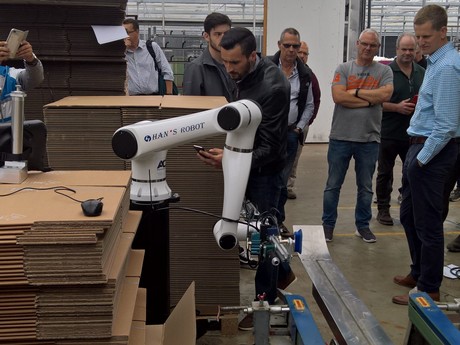 One site also had a conveyor belt feeding the trays in for the transplanter, in essence giving a buffer which could result in a labour saving.

The ISO Sticking Robots at Beekenkamp were very impressive, according to Vas. "These were achieving approx. 2,300 per hour, there were still some gaps post planting though." 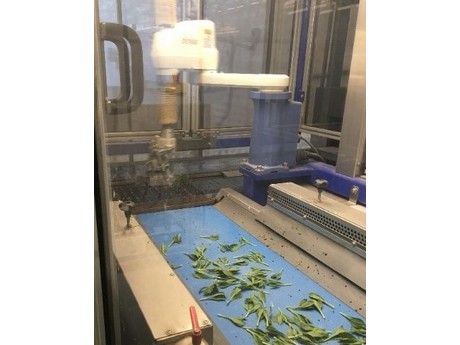 A TTA Gapping Machine was pushing out existing plugs on trays and positioning established plants/plugs from another tray, "good if you have lots of gaps after germination."

A TECMEC Cyclamen Grading Machine sorted into Class A and Class B, can grade up to 9,000 per hour "but was achieving 7,440 when I checked." 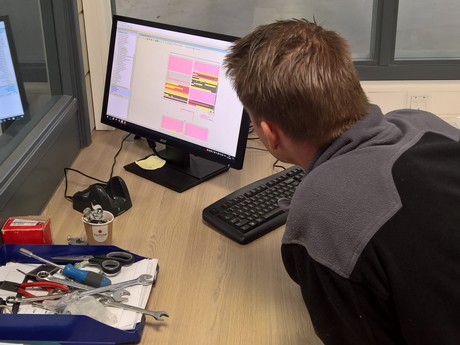 At P v.d. Haak, SDF Software/System was used to move benches in and out of the glasshouse. "This is a great system that we know KG/Technicon could also deliver", Vas says. "You can query where certain types of plants are etc. and can see at a glance".

High Level Automation was in place for clean benches. "Works well, not dissimilar to what we now have at Clay Lake", Vas commented.

At Deliflor, the growers viewed the 30 Sticking Robots producing up to 1 million Mums a day. Heads pick up 1 at a time and deliver 4 at a time to the planting head which plants 8 at once. "An excellent system which makes the best use of the robot head reducing travel time", Vas said.

The next stop was Zuidbaak, which featured compost feeding over conveyors direct to various potting machines etc. "A good idea as large amounts of compost can be fed into a single main feed and this also avoids the mix of pedestrian and vehicle movements."

Vas also refers to the manually operated cranes in the glasshouse that can pick up entire beds of trays, "great if you are laying down on the ground but probably not for us."

There was also a simple tray watering station that a single trolley feeds through, "pushed through by wheels like our trolley pusher system. Simple but effective."

Also at Gebr. Grootscholten, SDF Software was in use as per v.d. Haak. "Very good", Vas comments, moving on to the transplanting machine: "TTA Machine Transplanting to Javo standard SE potting robot, very effective and could reduce staffing levels by 1 or 2?"

At Wouters Kwekerij, a Visser Transplanter was seen in action – 5 working heads each with 8 heads, could achieve around 32,000 per hour.

The growers also saw a high level hanging basket transportation system. "Very useful if you are doing a high number of baskets, makes the best use of space and gets them off the floor."

There were also simple but effective metal braces in use to link trolley to trolley during transportation, "a safer option than plastic ties."

Vas wasn't completely sold on the wire guided mobile trolley pullers though, although "they look good and travel at a safe speed etc."

"Woodchip storage was poorly managed, too much empty space in store and woodchip outside getting wet. They have 1 x 5Mw and 2 x 6Mw Biomass Boilers (Kava)."

The trolley building machine looked good, according to Vas, although he wasn't sure how reliable it was. Can be looked after by 1 person but it sounded like they preferred making trollies by hand using a trolley pusher system.

Vas sums up these "best bits" of the tour:

His conclusion: "As we have seen from other study tours, it can be most impressive watching the ‘magic’ of modern technology in action as with the plant spacing robots in the eastern US. What is more interesting is when systems of production are introduced that harness the valuable innovations into a coherent system and help growers to engineer out labour peaks, operator error etc and increase product quality and reliability. This can only be done when the production unit and process system has been conceived as a whole and appropriate automation employed to complete the picture. We remember, amongst others, Dr Gideon Avigad who spoke on these themes to our conference meeting in 2016 and is working to integrate robotics and automated equipment into growers’ nurseries. In future, it will be possible to move from the automation of specific tasks to a scenario where the use of artificial intelligence and machine learning allow robotic arms to learn a number of functions that replace human input, not just in terms of physical effort but also automating work areas requiring judgement and decision making such as in grading and packing operations."