A time-tested Lone Star favorite – Blue Daze – has been added to the list of Texas Superstar plants. 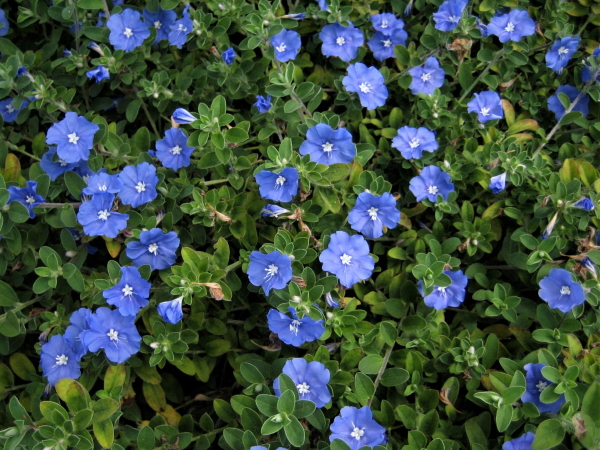 To be designated a Texas Superstar, a plant must be beautiful and perform well for growers throughout the state. Texas Superstars must also be easy to propagate, ensuring the plants are widely available and reasonably priced.

Blue Daze is a heat- and sun-loving, low-spreading tropical plant used as a summer annual, Pemberton said. The variety provides gardeners and homeowners summer-long flowers of a beautiful sky-blue hue.

“It’s a true-blue flower and a long-established Texas gardening staple,” he said. “Blue Daze is very popular because its claim-to-fame blue color is a coveted color in the flower world.”

Get to know Blue Daze
Blue Daze is sometimes referred to by the common names evolvulus or shaggy dwarf morning-glory, or as Hawaiian Blue Eyes.

It grows and blooms best in full sun, Pemberton said, and produces fewer flowers in areas that are too shady. Blue Daze tolerates salty conditions, which make it a good option for coastal gardens.

The plants’ grey-green foliage serves as a backdrop for small but plentiful brilliant blue funnel-shaped flowers. Some cultivars may have foliage that appears downy.

Pemberton said newer varieties have been introduced over the last several years. The improved varieties, such as Beach Bum Blue, display bigger and more numerous flowers because they have a bushier shape.

“Blue Daze performs really well in Texas summers, and the newer varieties just improve on the great characteristics that make it a favorite for gardens and landscapes,” he said.

Plants grow 9-18 inches tall and spread up to 36 inches wide. They are generally grown as an annual in areas that experience frosts but act as tender subtropical perennials in U.S. Department of Agriculture plant hardiness zones 9-13.

They can be used as border plants, ground cover, or a spiller in hanging baskets or mixed containers, Pemberton said.

Caring for Blue Daze
Blue Daze tolerates a wide range of soils, including sandy soils and soils with poor nutrient levels, Pemberton said. However, the soil must be well-drained, as plants that are too wet can quickly contract fungal diseases that will severely shorten their life span. Regular moisture and a balanced fertilizer will help get the plants established, he said.

“If they’re going in the ground, it’s best to plant them as soon as possible so their roots are well established by summer,” he said. “It helps their drought tolerance.”

Mulching and a monthly fertilizer program throughout the growing season will help keep the plants blooming, especially in poor soils.

Pemberton said Blue Daze and other improved varieties should be broadly available at local nurseries, garden centers and retail stores. Retailers tend to sell the plants in 4.5-inch or quart-size containers in spring and summer, and in 10-inch hanging baskets later in the season.

“The combination of it being a prolific performer and its blue color are attributes that put Blue Daze over the top for a lot of gardeners and landscapers,” he said.