In a world that appears to have been turned upside down overnight, there is a need for hope. That is why the Flower Council of Holland developed an international campaign filled with hope in March in collaboration with businesses from the sector. They created it in record time, aimed at a wide target audience through various channels. The result was that the campaign message #lethopebloom became a symbol of hope during troubling times around the globe. 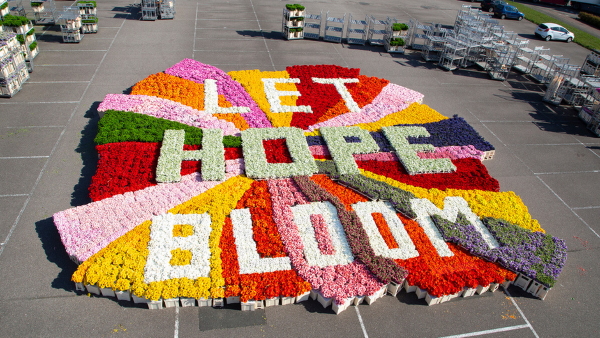 High rating and result
The campaign was a message from the entire floriculture sector, and a great display of collaboration. The results also offer hope. Quantitative research by Motivaction amongst consumers in the Netherlands, France, Germany and the United Kingdom shows that the Let Hope Bloom campaign was given a high rating and was perceived very positively. The message had been widely seen and hit the right note with the core target audience, and was given an average rating of 8.2. An impressive 88% of respondents thought that the campaign was beautiful, 84% said that they found the campaign to be eye-catching, and 74% felt that the campaign was personally relevant. The campaign was also considered to be appealing (85%) and credible (88%). Many respondents (69%) indicated that they wanted to buy more flowers and plants for themselves or others as a result of the campaign.

Successful media plan
The message Let Hope Bloom, brought to life through an enormous flower sculpture, had a wide appeal just as intended. A mixture of online and offline advertising meant that the campaign achieved a high impact in a short space of time. Influencers in the Netherlands, Germany, France and the United Kingdom ensured a massive reach on social media. International newspapers published the colourful campaign message, and #lethopebloom was shared all around the world. Images of the flower sculpture also made an appearance in the broadcast of the Eurovision Song Festival, which could be watched live in 47 countries on 16 May.

The idea behind Let Hope Bloom
Flowers offer powerful symbolism, a wide palette of colours, and sometimes scents that speak the international language of love and friendship, of gratitude, support and consolation. And hope. With a massive flower sculpture #lethopebloom was showing the world that flowers are always there for us.