Transport companies, Cargoboss and Van Daalen Transport are going to become one company. The two organisations have a long-standing history in the Westland and will now form an exciting partnership - BosDaalen. They will continue as BosDaalen early next year. Aris van Daalen, director and co-owner, believes, “It is the right time for taking the final steps in the merger of our companies,“ Gerard Bos explains, “It means we are looking towards the future whilst still continuing our shared history. It feels like two families are becoming one.”

Both directors emphasize that this is not a take over by any means. “Cargoboss and Van Daalen Transport were, and will remain, in the hands of two families,” explains Van Daalen. “Ever since the
1970’s we have worked together intensively. In the back office, for example, our services have already been combined. We shall keep working from our main depot in Maasdijk and our branch in Eschbach (Germany). It is just a logical step for us to continue under one name, featuring one logo and becoming a powerful presence in this industry”.

The two-family businesses were founded by the great-grandfathers of the current directors; Cargoboss in 1902 and Van Daalen Transport in 1920. “We are keeping our great- grandfathers  legacies by combining the names: BosDaalen,” Van Daalen explains. 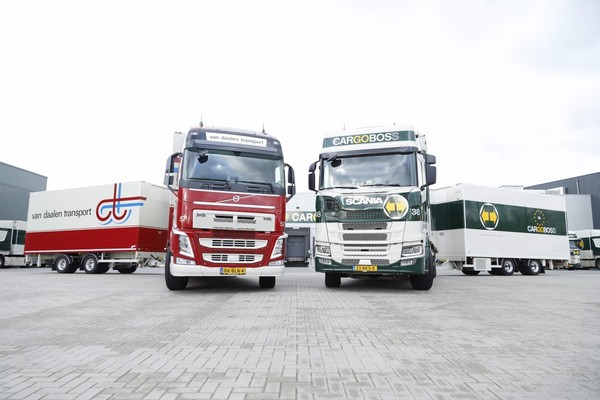 Just as the two companies did before, BosDaalen will be focussing on temperature controlled transportation of fruit and vegetables, flowers and plants, to Germany, Switzerland and Northern France. “As our customer base is reasonably mixed, it makes sense to become one firm," says Van den Bos, “We want to be the top player in a market that is becoming increasingly faster and fresher.” Van Daalen agrees,” We are now joining two healthy companies together to form one strong and recognisable player.”

The merger of the two companies creates an enterprise with a strong workforce of 350, and a fleet of 120 trucks. These trucks will gradually be fitted with the new logo and the colours which have been designed by Rotterdam based company Studio Fraaj. Van Daalen explains, “We expect that the new trucks, bearing the name BosDaalen will be on the road early next year.” This merger is an exciting time for the two companies and BosDaalen will be formidable partnership in this industry.