"Blue light is the secret to success"

Roses are red, violets are blue, it is said. But other plants can benefit from red and blue colours as well. Blue and red LED light have proven particularly effective when it comes to speeding production times and optimizing plants, a study on Osteospermum carried out by Senmatic and a Danish nursery shows. 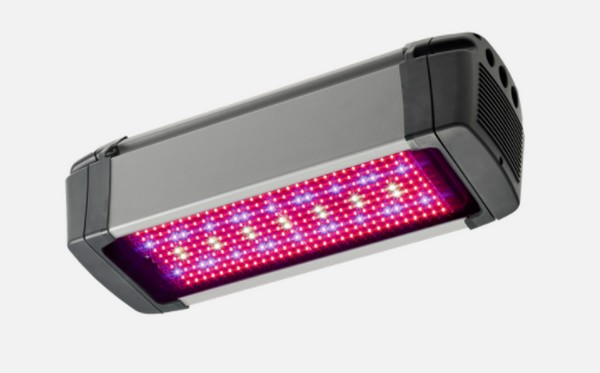 From the production of cuttings to breeding at propagation stations and further processing in the nurseries. There are multiple processes prior to the end consumer purchasing daisy flowers in their local stores. But the process can be accelerated by replacing chemical plant growth regulators (PGRs) with LED lighting. The faster production times in the nurseries free space for more plants to sell to the stores’ procurement team.

Study results: Faster production times with no use of chemistry
Results from the study with LED light as a replacement for PGRs are convincing, but also surprising. In addition to greener foliage and more uniform plants, production times were optimized from a normal rate of 4-6 weeks from stick to onward sale for transplanting to 3-5 weeks. The faster production time means that you can utilize the same square metres for more production repetitions, which thereby creates a potential for an increase in sales.

"I was surprised that we were able to produce a shorter and more sellable plant with no use of PGRs only using LED grow lights," says Jesper Slot, former owner in the nursery where Senmatic carried out the studies and current CEO of Graff Young Plants.

"In addition to producing more young plants by square metre and from it increasing our sales, we were also able to accommodate the increasing interest and demand for young plants produced with no use of PGRs. Using only LED lighting, we had a product that could be promoted as free of pesticides with exception of control of fungal spores. Reducing the use of chemical remedies is a supply chain liability and something the entire chain from propagation stations to procurement should seek to improve," says Jesper SlotCEO of Graff Young Plants

The added value factors should naturally also be included when calculating the collected cost of investing in changing from traditional HPS lighting to modern LED grow lights: "You have to look beyond savings relating to electricity costs when investing in LED. Our customers experience less loss, less retardation, and more uniform plants. Factors that all result in optimizing work procedures in the nursery. It is crucial to calculate the collected cost reduction," says Morten KrageKey Account Manager at Senmatic

LED in replacement of chemical PGRs
The idea of using LED lighting in replacement of chemical PGRs began to grow in Jesper Slot after having been in contact with Senmatic, where he got wind of the convincing impact LED has on plant growth and growth regulation. In collaboration, a study on the effect on Osteospermum was carried out in the nursery, which Jesper Slot co-owned.

In a small test compartment of the nursery, which produced millions of Osteospermum to be sold throughout Europe, four varieties of Osteospermum were placed under LED grow lights in the plant’s 8th week from 05.00 to 21.00 at a temperature of 16 degrees Celsius. To compare growth results, all four varieties had reference plants, which were growth regulated traditionally by using PGRs.

During the study, different light combinations were tested. Research has shown that red light stimulates rooting, and thereby “stretches” the plant, while blue light “pulls” and thereby impacts the height of the plants.

The use of grow lights in agriculture and horticulture has been thoroughly examined. Research has found that blue light results in compact growth, while red light impacts stretching. This might, however, vary based on culture – in some plants, the exact opposite might be the case. For instance, it is just the opposite in tulips, tells Morten Krage, while Jesper Slot agrees:

It is a well-known fact in the horticultural industry that the colours of LED can affect plant growth, but there are still some unanswered questions, and not all plants have been examined. That is why Senmatic decided to examine Osteospermum, which they produced for the European market. 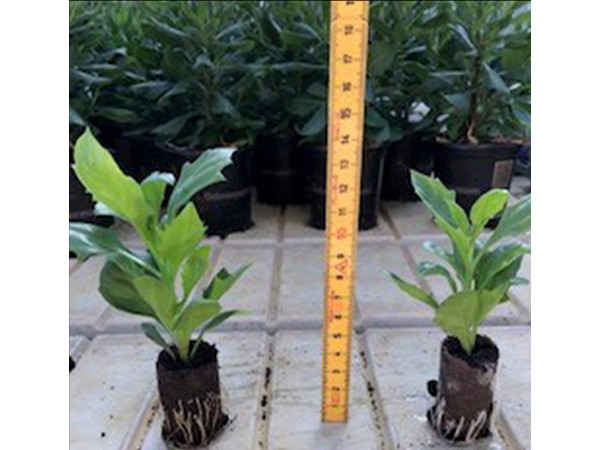 Example of the study’s findings – Sunny Osteospermum Emma:
The tables below show the test results for the Sunny Osteospermum variety Emma. The three tables show how the light combinations have impacted the plant. Note that the only changes in growth regulations are the combinations of LED-lighting – controlling light combinations is easily managed using Senmatic’s LED controller or their climate control. The reference plants have all been treated with PGRs six times and have been placed under traditional HPS-lighting. It is worth noticing that even with a non-controllable, permanent LED light plan, remarkable results were experienced.

"It is thought-provoking that it is possible to completely remove chemical PGRs during formation just by using LEDs," says Jesper Slot.

In addition to studies on the Emma variety, similar studies have been carried out for the Sunny varieties Atilla, Galina, and Carlos. 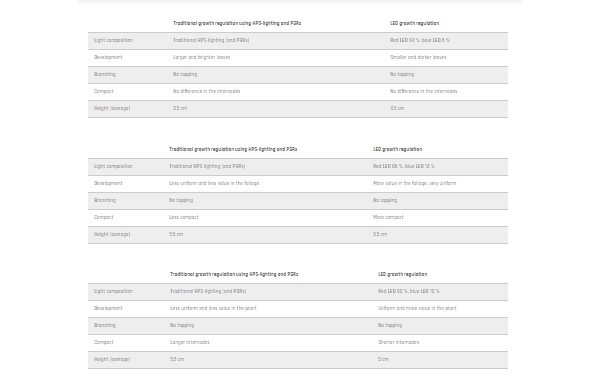