NL: Trials done on the effects of LED lights for chrysanthemum cultivation

In the past decade, the interest in LED lighting in greenhouse horticulture has increased considerably, due to the lower electricity consumption and reduced heat load compared to HPS lighting. Another advantage LEDs offer is the option to create a crop specific “tailor-made" light spectrum. 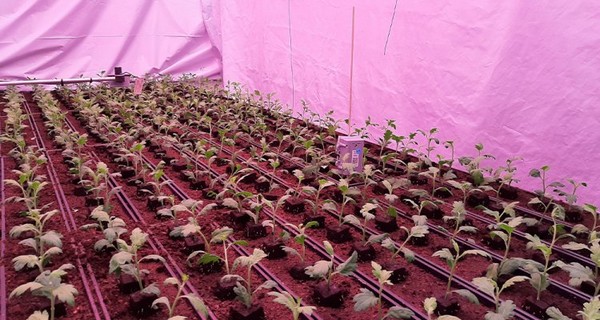 Far-red light
There is already some experience in the cultivation of chrysanthemums under LED lighting, but the question remains which light spectrum should be selected when a grower needs to make decisions on investments in LED lighting. An important question hereby is whether or not far-red light should be added to the spectrum. The results of experiments and tests in commercial practice are not always unambiguous. In some cases adding far-red light has no (positive) effect, sometimes it does. The effects that were reported relate to elongation, bud break in the lower part of the canopy, rooting, and a shorter time until flowering (“reaction time").

Far-red light (700-800 nm) is not visible to the human eye, and falls outside the photosynthetically active radiation (PAR light), of 400-700 nm. However, far-red light is very important in a number of plant processes such as elongation, branching and flowering, which are controlled by the ratio between red and far-red light. Well-known examples of applications of far-red light in greenhouse cultivation are the use of incandescent lamps in strawberry for the elongation of peducles, and in cucumber to improve leaf architecture and fruit production.

In order to be able to answer the questions about the application of far-red light in an LED light spectrum for chrysanthemums, a trial was recently started within the project “LED light in sunlight" financed by Kas als Energiebron. In this spectrum trial, four chrysanthemum varieties are grown under full-LED, in which the LED light accounts for approximately 80% of the light sum, and the sunlight approximately 20%. The light treatments that are applied differ in the proportion of far-red light and the time of day at which this far-red light is given. The LED light intensity applied is 190 µmol/m2/s, which includes far-red light.

The next steps
During the trial, crop development is monitored, and stem length and light interception are measured. In the intermediate destructive measurement and the final harvest, detailed plant measurements will be taken on stem length and weight, number of leaves/internodes. The time until flowering will be determined per variety per treatment. These results will help to make decisions on the application of the most suited light spectrum, in order to be able to take the next steps towards a full-LED cultivation system for chrysanthemum.​