A quick tour around the world

It's Valentine's Day! Florists are still in the middle of the rush, so no final conclusions can be drawn yet, but all over the world, the run-up has been promising with even some records being broken. Many in the industry agree that COVID increased the demand for flowers worldwide. However, not without any challenges. In an article that we've published last month, several rose growers from all over the world mention that the lack of airfreight and expensive supplies have raised the prices. Besides air, also increasingly more flowers are being shipped by sea. PortMiami, for example, handled records in flower imports by Ocean cargo. But how was the run-up to Valentine's Day in the other links of the chain and in the rest of the world? Below an overview.

The Netherlands
At the Dutch auction Royal FloraHolland, 159 million roses and 155 million tulips have been traded in the run-up to Valentine's Day, which is more than last year. However, the percentage of Dutch roses has been lower, 27 percent, the auction reports.

The reason for the lower supply is due to the high energy prices, which forced some growers to ‘go cold’, meaning they turned down heating and switched of supplemental lighting, as the revenue will not outweigh the sharply increased costs.

Out of Africa, 80 percent of the available production has been shipped to the Netherlands.

The total number of flowers sold decreased; from 535 million to 517 million. The average price of cut flowers was about 10 percent higher than last year. The price of roses was equal. The price of premium roses rose by approximately 20 percent compared to last year. chrysanthemum, gerbera, and lily were also popular. The colors red, white, and pink were the most popular.

More houseplants were also sold than last year. The average price was about 10 percent higher than in 2021. Phalaenopsis tops the list.

United States
In the US, COVID also resulted in an increase in demand for flowers. According to Joost Bongaerts of Florabundance, a wholesaler, based in Carpinteria (CA) who ships flowers all over the US, flowers have become popular and when looking at Valentine's Day, he is pleased. "Custumers have done a good job pre-ordering and it's great Valentine's Day's on a Monday this year. It gives us time to ship out all the orders around the country. And fortunately, the weather has been good", says. In an item on News Channel 3-12 last Thursday, he said that roses are still the number one flower, but lilies, ranunculus, and peonies are very popular too.

Joost Bongaerts in The News Channel 3-11 item on Thursday February 10.

Colombia
Most of the flowers sold in the US are imported and many come from Colombia. According to Asocolflores, during Valentine´s some 650 million stems are being exported and mainly go to the United States, representing around 15% of the total yearly exports. And in 2022, the exports reached year reached US$1,727 million, the highest figure in the country's history, the association reports. Also, to promote Colombia's flowers for Valentine's Day, they created and published this video below.

Canada
At Canada's last standing year-round rose grower on Vancouver Island, Eurosa Farms, it has never been busier. Most flowers are usually imported, but as there are not as many planes and trucks running out of Miami, local demand skyrocketed. Its 4.3 acres of greenhouses harvest more than two million roses per year. 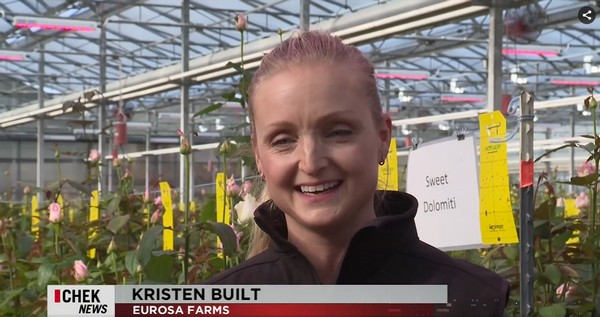 Click here to see the video at Eurosa Farms

Australia
Australian flower growers are enjoying a busier than average Valentine's Day period, due in part to a pandemic-driven reduction in imported flowers, abc.net.au reports. So prices of imported roses increased significantly, One Melbourne florist told Business Insider Australia that some Valentine’s Day buyers were prepared to pay $999 for 50 red roses, a bouquet that usually costs a modest $499. And SBS reported that preserved and dried blooms have allowed florists to overcome supply issues brought by COVID-19.

India
Also in India, prices are high, reports www.thehindu.com. "While demand and exports have risen when compared to the past two years, rising freight charges, unseasonal rains, and lack of new varieties are exposing the thornier side of this rosy picture. Floriculturists are feeling acutely with the increasing cost of production of roses and the hike in the price of international cargo. The production of roses and other flowers has been low with over 30% of growers abandoning the occupation after COVID-19. This, along with constant rains in August-September-October, has created a huge supply shortage in the market and subsequently, prices of all varieties of flowers went up by nearly 200% to 300%, as compared to pre-pandemic levels.

Bengaluru is the biggest exporter in India. Pune is a close competitor. But Bengaluru roses are of better quality, M Vishwanath, joint director, horticulture, Bangalore division told www.deccanherald.com. Read the article to learn on Bengaluru as a hub of cut roses.

Turkey
Turkey sells 65M flowers to 24 countries for Valentine’s Day, reports dailysabah.com. "Ismail Yılmaz, chairperson of the board of the Ornamental Plants and Products Exporters Association, told Anadolu Agency (AA) that the sector closed in 2021 with $148 million (TL 1.99 billion) in exports and started the year on a promising note. The sector has set an export target of $180 million for 2022, Yılmaz noted, saying that the data in the first month of the year “made them smile” as there was a 12% increase compared to last year. He noted that the orders are at the desired levels for Valentine’s Day. Highlighting that most of the shipments have been completed for Feb. 14, Yılmaz said, “We send additional requests by plane.” A total of 65 million cut flowers were sent to Europe, he said, adding that this equates to an export revenue of $9 million."