Roses and LEDs meet in this Russian greenhouse

Growing roses all year-round, with the possibility to ramp up production when necessary. This is what YUG AGRO does in the largest greenhouse of the Krasnodar region, Russia. “We grow over 40 rose varieties here,” says Aleksey Chief Agronomist of YUG AGRO. Indeed, the greenhouse is in full blooming of different standard, scented, and spray roses. “We have a very modern setting here,” he continues. This is true if considering the climate of southern Russia. “It doesn’t get too cold in winter,” he points out. “Yet, in the summer, it gets very hot.”

Thus, the temperature is not that big of a problem in Winter for Aleksey. The real challenge is lighting. “We have a good level of productivity, but this can be way higher,” he says. “The sunlight we get is not enough to accommodate that, especially during fall and winter. That’s why we have installed HPS lamps in the past to complement that.” 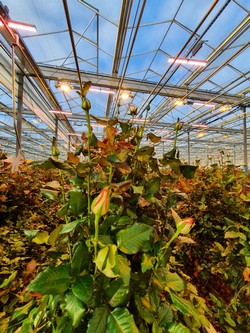 Yet, Aleksey was still not satisfied with what he was seeing, “We can produce even more than that. We are focusing our efforts now to increase productivity. To do that, we are increasing the light.” So, YUG AGRO has set up an experiment in the greenhouse to compare different fixtures, with a special combination of lights. “We are going for a hybrid setup,” he remarks. “HPS and VYPR 3p LED fixtures from Fluence. Together with the horticulture service team from Fluence, we decided on an efficient, whitish-pink spectrum including far red for good flower forming, strong shoots and long, straight stem development.”

YUG AGRO started experimenting with these lights only in January, so it’s still too early to draw conclusions. “Yet, you can already notice something,” says Aleksey. “Shoots look and actually are very strong already, and generally stronger compared to the control area.” At the same time, this trial is not solely about checking which fixture and setup perform the best. “We are also looking for more effective ways of operating for example to use hybrid lighting in winter for having the heat from the HPS, and use Fluence LEDs only in fall and spring periods” 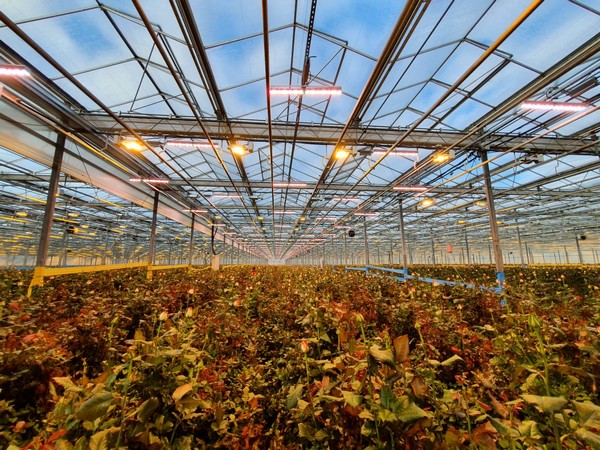 Energy in Russia
Even though YUG AGRO is trying to find ways to reduce energy consumption, the situation in Russia is way different compared to Europe. “There’s no energy crisis here,” he says. “Prices in Russia are way lower than currently in Europe. Yet, we do value sustainability, and it’s clear that this is where the future is heading towards. So, we need to start thinking about that now: if we don’t do anything, it could damage our production and profitability later. We are probably going to switch all our HPS to LEDs in the future, but we need to test this first. For now, we are going for a hybrid solution.”

The attention to the smallest details makes the demand for YUG AGRO’s roses quite high, according to Aleksey. “We use a lot of things to make sure that our roses have a long shelf life: for instance, we protect the roots with some microbiology solutions, and a lot of micronutrition as well.” 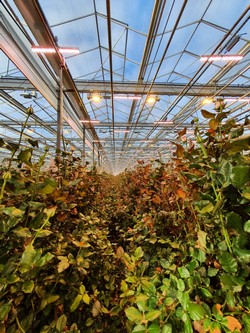 Ramping up production right before demands surges
Keeping roses constantly fresh with a long shelf-life is crucial, especially in the period to come. “Valentine’s day was just a few days ago, and sooner than you may think it’s the 8th of March,” says he. “During this period, rose prices are generally higher than usual. To capitalize on that, and to fulfill the huge demand, we ramp up production so that we have everything ready for the 8th of March. To do that, we start increasing the temperature in the greenhouse 2 weeks before the 8th of March - so, basically after Valentine’s. We start selling roses around the 18th of February, as it takes around one week to get delivered. That’s why being able to maintain their freshness and quality is absolutely crucial.”

Together Yug Agro and Fluence will further optimize lighting strategies to improve production.

“We are delighted to support Yug Agro with our lighting solutions to provide roses to the Caucasian and Ural region,” says Timo Bongartz, Fluence’s General Manager for EMEA region.