These Dutch roses are grown without energy

"It all started as a hobby and it took us about a decade to develop a good assortment. Now, regardless the current energy prices, we are now in a good position, with our specialty roses", says Dutch grower Marc Sassen of VIP Roses. We talked to him at the Royal FloraHolland auction, where VIP Roses rents a booth. 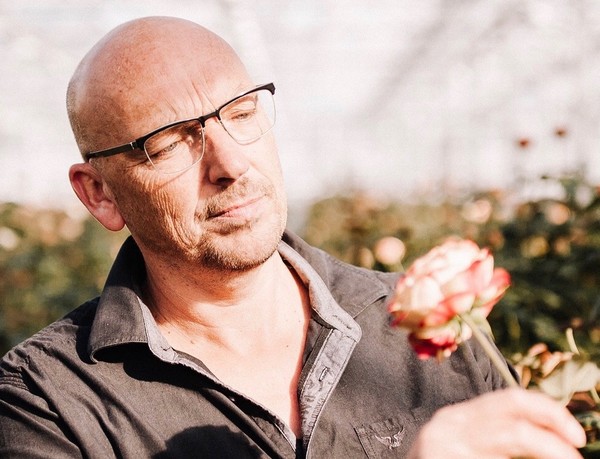 Here, the company processes and trades the roses they grow in Ter Aar and at two locations in Nieuw Veen (two small villages in the Netherlands) on a total acreage of 35.000 m2. Together with his brothers Ed (responsible for cultivation and staff) and Jeroen (sales), they run the company VIP Roses, a rose farm started by their father that they have expanded into a supplier of some 30 exclusive rose varieties. 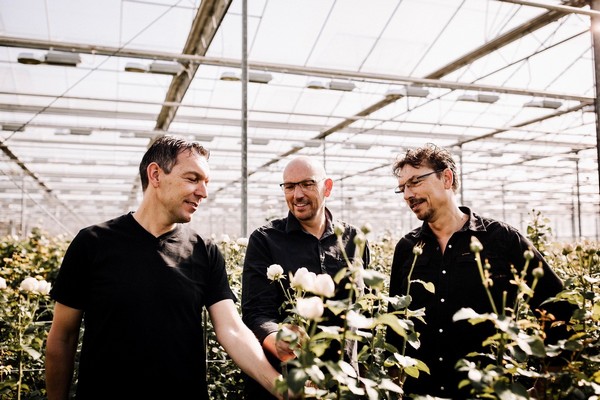 Brothers Jeroen, Marc, and Ed Sassen in the greenhouse

"We grow along with nature, which means we harvest roses from April through November," Marc explains. "That's our season. You can start a little earlier or go on a little longer, depending on how much energy you put in. Yet, we practically don't do that, because our roses, in particular, are suitable for the wedding season which is later. On top of that, we see better prices in the summer than in the winter. An additional advantage of that is that in the wintertime we use little energy. Of course, initially, we didn't expect that a crisis would come, but we did anticipate growing energy prices in the long run." 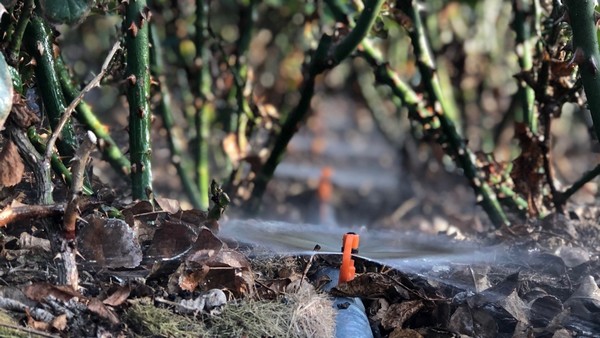 Roses grown in the soil.

Old school
A part of VIP Roses' gas supply is fixed. This part was used last winter to keep the greenhouse warm, providing a sort of balance between completely going cold and producing year-round. Some of the gas was even sold back. "I'm glad we went in this direction. Initially, nobody was doing that. Growers increased their lightning, while we did the opposite and outright stopped. The reason was that we had an old greenhouse and were about to demolish it. Yet, that old greenhouse is still there, and we are growing in it. There is no gas connection, and the boiler that used to be there is also gone. So we gradually discovered to grow a beautiful rose in here, without any energy." 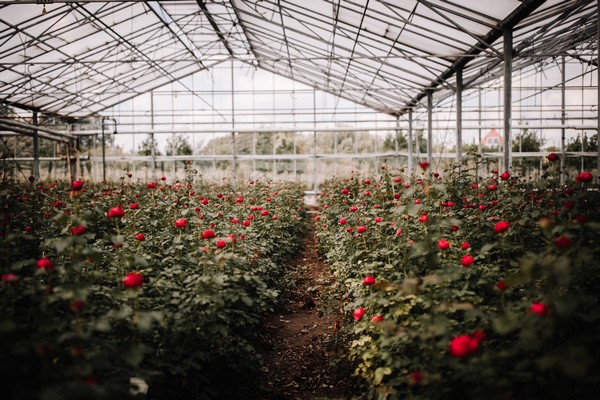 First cut in May, in ground

"If you don't use the heating system, you will have roses from May to October. We get three batches, we call them 'three cuts', which is about half the amount you have with high-tech greenhouses. We grow them in an old-fashioned way, in the soil that is. Trying to grow beautiful roses without any energy at all is absolutely super fun. This is a type of cultivation that no one does anymore. So, we have to learn what we have forgotten and look for varieties that are suitable for our cultivation, which allow us to always have the highest quality. For instance, the first roses that come up in May/June are simply fantastic. After that, it's up to the weather how long you can keep harvesting."

In addition, VIP Roses have a greenhouse in Nieuwveen where they can grow year-round, and use some heating there to stretch out the season. "We do use quite a bit of energy there, but that is still not comparable to modern rose cultivation. Anyway, we are now pushing the limits to see how little energy we can use to get through the winter. We are now doing five cuts a year there, which is only one or two cuts less than a fully illuminated greenhouse."

Coloring, spraying, glittering, waxing
VIP Roses does more than grow roses; over the years, the company has become well-known for processing roses as well. "We have been painting flowers for a long time now, but in the beginning we only colored our own roses. At the same time, when we decided not to harvest in winter, we had a gap, which we had to fill by buying third-party products. That's when we also started painting tulips. Initially, in one color, but now there are about 50 different varieties in different colors. Especially the earth and natural tones are popular among florists. They usually don't like bright colors, and prefer pastel colors. Nowadays, besides our roses, this has become our core business. We also buy and color gypsophila, lisianthus, carnations, and even allium. There are about 250 different items in our shop. As of today, our roses only represent 1/3 of our turnover." 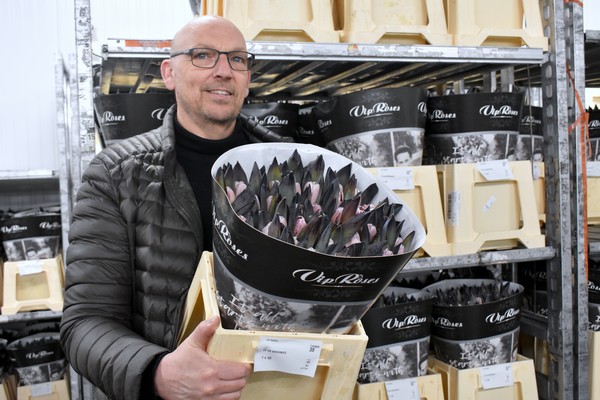 Painting, as well as glittering and waxing, is all done by Sassen in Aalsmeer. How they came up with this is another unique story. "Coloring started about fifteen years ago with a rose from our cultivation, the Dolce Vita. It's a white rose with a pink tip in the middle, but about 20% of the production does not have this heart colored. Without that, flowers were sold for lower prices. That pushed us to start experimenting with painting. At some point, the painted roses even started to be sold for higher prices than the untreated ones."

Instagram
Important in the developments of recent years is Instagram. "It's a lot of work. I spend so many hours on it, sometimes about half of my time during the day. We have 118,000 followers, which is a huge audience, and really facilitates the marketing. If I have something new and I put it on Instagram, sometimes our sales get orders a few minutes later." 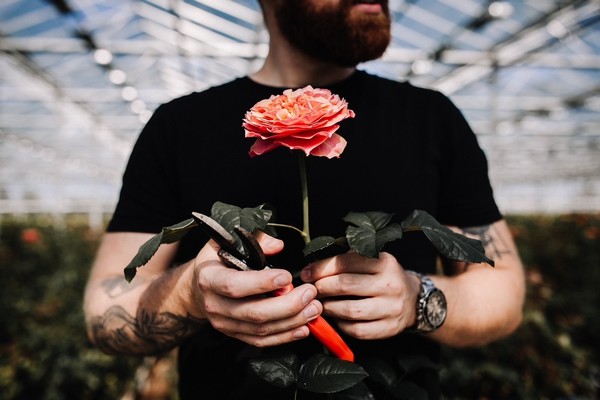 "Previously we never had contact with our customers, but we do now. In recent years, VIP Roses has become a renowned brand among florists. We're quite proud of that."

The social media platform allows VIP Roses to immediately grasp the interest in the public. "In the past, if you had a new variety, you'd bring it to the auction, and only then you'd find out whether people liked it or not. Now I put it on Instagram, and I can tell right away whether I'm on the right track, based on the post interactions."

Mr. Sassen and Mrs. Sassen in the greenhouse in Ter Aar

Kwekerij Sassen
VIP Roses is the continuation of the rose farm that Marc's father initially founded. "He passed away when I was 15. He had just started a new farm, the one in Ter Aar. I was still in school at the time, and my mother took over. I finished school and continued the business (Kwekerij Sassen) together with my mother and a manager. We always did things a little differently than others. Sometimes I think that happened because we no longer had a father who told us how to handle things. I don't even see myself as a grower really, else I wouldn't be here at the auction all the time, but it's thanks to him and of course our mother that VIP Roses is what it is.". 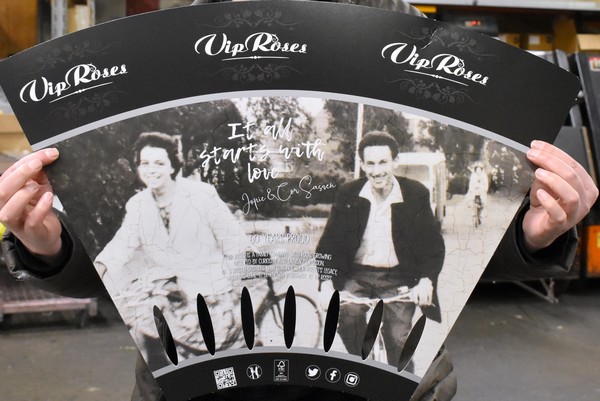 The cover is designed in honor of the founders, Mrs. and Mr. Sassen