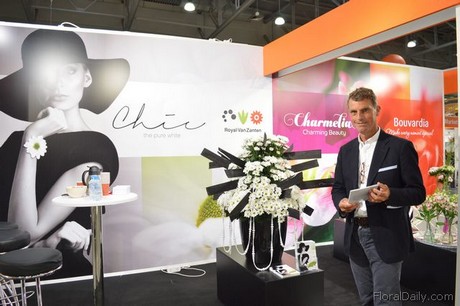 Bram Vos at the FlowersExpo in Russia, where Chic was showcased together with Charmelia, a new type of alstroemeria, as well as their Bouvardia varieties.

Chic was put on the market two years ago. The single flowered spray chrysanthemum is known for its snow white flowers, bright green center, no petal shedding and dye-ability. "This latter characteristic is very important in some countries", says Vos. According to him, the variety also has a good vase life of 14 days. "We have done tests at FloraHolland, on behalf of Intergreen, according to the protocol of Tesco. They conducted a 10 day transport-store simulation and after this simulation, the flower still had a vase life of 14 days. So, the flower is actually being judged on its 24th day", says Vos.

But the flower needs to be produced first and this is where, according to Vos, the flower offers even more advantages. "It is a good product for growers as it grows rapidly - the reaction time is 48 to 50 days - and the crop suffers less damage from thrips and spider mites." 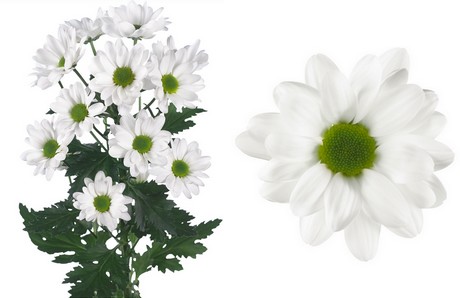 Create demand
In spite of the devaluation of the Ruble, the demand for white spray chrysanthemums in Russia is still good. However, the market is used to a single variety that is on the market for many years. In turn, the Russian importers often only demand for this specific variety as they are often not aware of the other varieties on the market. For this reason Vos decided to take another approach regarding promoting the product. "I first focused our promotional activities on the Dutch exporters, but soon after, I decided to go deeper into the chain. So, I started to visit Russian importers and placed several product presentations over there." And it seemed to work. "At the FlowersExpo, I met a lot of clients of importers who changed to Chic and this is a step in the right direction", says Vos.