In North America the demand of hand-tied bouquets is growing, with retailers asking for uniform and complex products. Making these bouquets is pretty hard work though. To keep up with a certain speed and quality, workers have to be well-trained. In South America, finding these skilled workers is a challenge and therefore, automating this process is interesting for many. The Mecaflor hand-tied bouquet making machine, for example, was introduced in 2015 and the demand has grown rapidly in Colombia, in the US and also in Europe. In Ecuador, Mecaflor’s export manager Marc Molitor sees good potential for this machine. 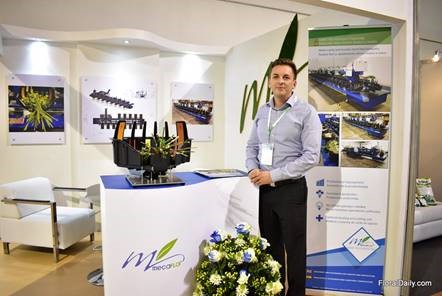 Marc Molitor showed the bouquet maker at Agriflor 2018 in Quito

Rapid increase in demand
The prototype of this machine was developed in France in 2015 and the first standard machine was installed at a Colombian grower in March 2016. From then on it expanded all the way to the US and Europe. So far, 47 lines have been sold. “The demand for this equipment is rapidly growing and our turnover doubled over the last two years”, says Marc.

Just follow the instructions
In South America, it is hard for bouquet makers to find skilled workers during peak production times. With this bouquet maker, you do not have to train people and the maker can handle large volumes. “The minimum production is 500 bouquets per hour and can go up to 1200 bouquets per hour”. The workers only have to lay a few stems on the devices, then the bouquets will be automatically bound and cut.

The machine can handle bouquets with up to 44 stems. “Usually, it takes a while to be able to make large complex bouquets, about 2 weeks training. Now, we split all the tasks, one or two flowers per worker, for example. Only one skilled person is required to create and save the bouquet recipes in the software. Then, the workers just have to follow the instructions on the displays.” These screens show them which flower to put on what compartment number. Besides being easy for the workers, it also makes for uniform bouquets. “Retailers are looking at consistency, and with this system, all bouquets will look the same.” 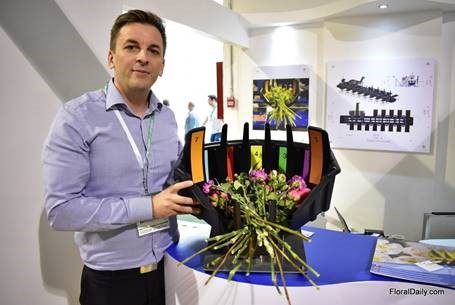 Payback time
On average, the payback time is three years, but it can be shorter. “We even have an example of a customer whose payback time was one year. It depends on the volume.” Also in California, the machine offers a solution as the minimum wage is increasing.

Potential for Ecuador
One of Mecaflor’s customers is a grower in Ecuador, and according to Marc, there is potential for growth. “Ecuador is the rose growing country, but lately the variety of crops has been increasing. We see more growers starting to make bouquets, but in order to exploit the bouquet maker’s potential, the volumes need to increase”.

IFTF
Curious about the Mecaflor hand-tied bouquets making machine? From November 7-9, they will be exhibiting at the IFTF in Vijfhuizen, the Netherlands. At their booth (number B4.28) they can answer all your questions.