The history of the potting machine

The 1960’s in Germany were a time of reform. The divide between East and West was greater than ever as the Berlin Wall was constructed. This was a difficult time for the people of Germany; poverty, rebuilding and uncertainty. During the regrowth period, potted plants became extremely popular with Germans. The process of potting plants was a very tedious and time consuming process as all steps were completed by hand.

George Mayer, a metal worker by trade, developed a machine that would change the horticultural industry forever. George had an idea to make the process of potting plants quicker and easier by developing an automatic machine to keep up with the increasing demand for potted plants. He began developing various prototypes and after years of testing, Mayer introduced the first potting machine equipped with an automatic drill motor in 1967. He called it “The Planter”. The first machine had a small container for soil and the pots were loaded onto the carousel by hand. The automatic drill motor was a great time saver and made the machine very popular. 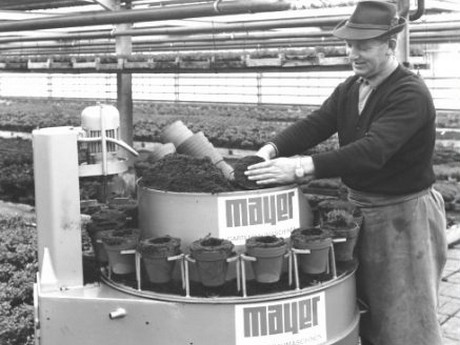 George Mayer changed the horticulture industry with his invention of the potting machine in 1967.

Innovation
With the success of his invention he continued to work on perfecting his design into a more automatic machine. The second model he developed was released in 1969. This updated version called “Model 69” had an automatic system that transported soil from an attached soil hopper that used two drill type cylinders. Later models would include a rubber belt with elevator chains and buckets to move the soil, an automatic pot feeder and an electric frequency controller that controlled the soil elevator and carousel turntable. This familiar carousel style is still evident in current Mayer model productions today. 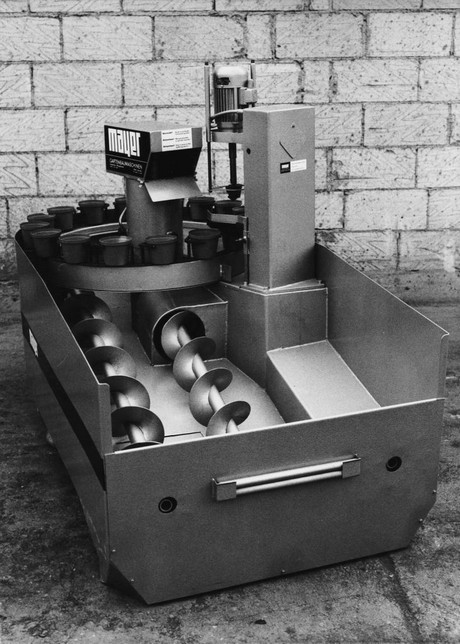 Quality
Because of his background in metal working, George realized that building a quality machine was important to withstand the extreme conditions of handling soil everyday. He knew that the machine had to be built to last. Over the years, Mayer would become well known for this quality and was the pioneer in potting machine technology. Their machine designs have been copied by many companies and their carousel style is visible on many different competing models.

Mayer today - 50 years
Today Mayer machines are known worldwide. Their potting machine still features much of the same quality design principles as it did 50 years ago when George Mayer invented them. George’s son Klaus has now been managing the company for 25 years and Mayer is still known for its quality.

Customers
Northwoods Nursery is a chapter in the Mayer success story that illustrates Mayer quality. Their 1996 Mayer 1010 potting machine has lasted over 2 decades. In fact, when they decided it was time to replace their machine last year, the machine was still fully operational and meeting the needs and demands of their production line. They simply decided to upgrade to a machine that had the newest technology features. 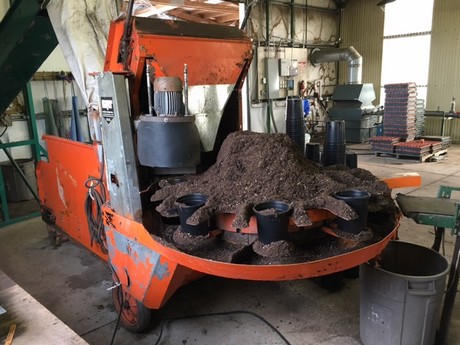 1996 Mayer 1010 potting machine at Northwoods Nursery was still fully operational when they made the decision to upgrade to have the benefits of the newest technology. 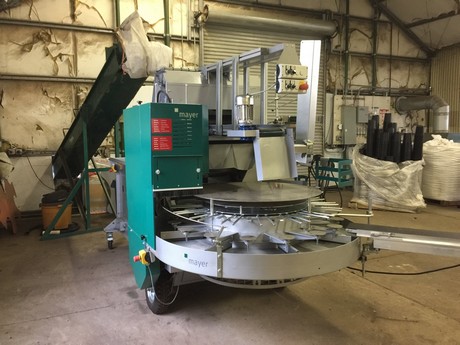 Solution for growers
The potting machine is one of the best ways for growers to introduce automation into their production line. Increased output, improved product quality & uniformity and reduced labor liabilities are all major benefits of a potting machine. A potting machine provides growers with a sustainable, productive and cost effective solution to their labor problems.

Because the potting machine is such an essential part of the production line, Mayer offers a potting machine for every size and type of grower. Their lineup features 10 different models that handle pot sizes ranging from 5 cm to 40 cm, various output capacities and varying sizes of soil hoppers. 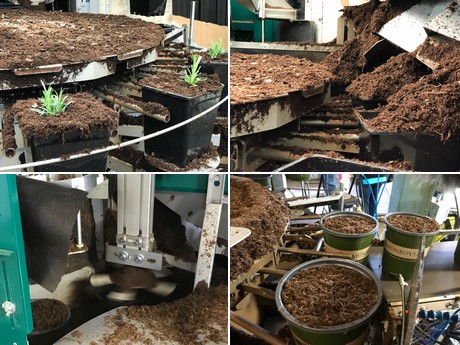