Building a knowledge and innovation center in Erbil, Iraq

In addition to a World Horti Center in Naaldwijk and four in China, Kurdistan will now also get a World Horti Center. In Erbil, a new knowledge and innovation center will be built by the Kurdish project developer RedYar. A declaration of intent was recently signed.

The project developer has started the construction of a 75 hectares food & distribution center, a wholesale center with fruit and vegetables for retail and restaurants. On the grounds of this ultra-modern distribution center, the knowledge and innovation center will also be built in the near future. Enough space for greenhouses has also been planned in order to realize a self-sufficient position of food production and delivery in Kurdistan, Iraq. 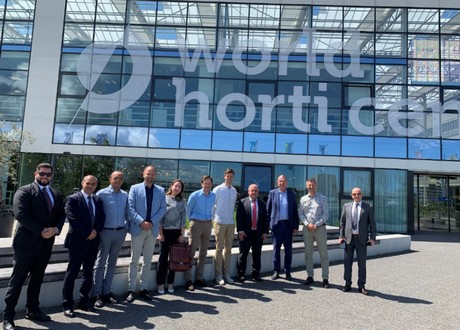 In the rebuilding of Iraq, a great need for knowledge in the fields of agriculture, horticulture and cattle breeding is still apparent. The citizens consume a lot of fruits and vegetables and, in the period before the war, Kurdistan, North Iraq was mainly self-sufficient. Nowadays, 17 billion euros worth of imported products is imported on a yearly basis, of which almost 600 million on tomatoes for this region alone. A World Horti Center in Erbil, with the triple helix of Research, Education, and Entrepreneurs is meant to contribute to the further economic development of the country and, if possible, in large parts of the Middle- East.

Mark Zwinkels of World Horti Center: "For the Netherlands, this holds tremendous export possibilities. The concept of World Horti Center forms an important platform for the Dutch and foreign companies, where the concept will be adjusted to the wants and needs of the given region of course. Demo greenhouses in the Dutch Westland will support the research and Education group Lentiz will provide their knowledge for a (green) education. The Dutch dairy farming industry is also involved in this massive development project. The collaboration was established with Willem Cosijn, the Dutch Consul General for Kurdistan.”