On a parcel of land near the Sunol Water Temple in the East Bay, the San Francisco Public Utilities Commission (SFPUC) is nurturing native plant seedlings. It's a huge project, but by hiring some of the finest people in the industry and using best plant management practices, the Sunol Native Plant Nursery is growing more than 120 different types of native plants from seeds.

Situated on a one-acre plot in close proximity to where the future Alameda Creek Watershed Center will eventually be located, the Sunol Native Plant Nursery includes the ATI greenhouse, as well as a shade house, garage, small office, soil bins, water tanks, metal tables, and equipment. 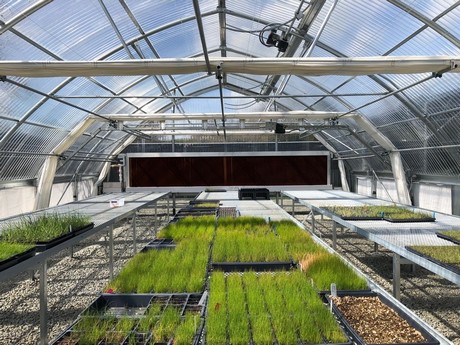 In the North Slope 24 greenhouse acquired from Agra Tech (ATI) of Pittsburg, CA, the nursery's initial goal is to create 70,000 healthy plants that will thrive and survive for many decades to come.

Over 15 years ago, biologists with the SFPUC’s Natural Resources and Lands Management Division witnessed coast live oak and tan oak trees dying in significant numbers on their Peninsula Watershed. Tests confirmed that these trees and a whole host of other native plants were under attack by more than one type of Phytophthora plant pathogen. In an effort to protect the watershed lands from further infestations of these pathogens, the SFPUC started funding research and imposing strict new requirements on the contractors and commercial growers that provided plants for habitat restoration projects on both the Alameda and Peninsula Watersheds. Despite these efforts, many new plantings in both watersheds turned out later to contain pathogens.

Everything in the nursery was designed to prevent the spread of pathogens by adhering to guidelines devised by the Phytophthoras in Native Habitats Work Group. "I tell people that what we're doing here is more like a laboratory than a farm," Ingolia said. "We have to make certain that everyone entering the nursery must be wearing clean clothes and wash their hands and shoes. Any vehicle or equipment entering the nursery needs to be cleaned and disinfected before entry, so that nothing is contaminated." 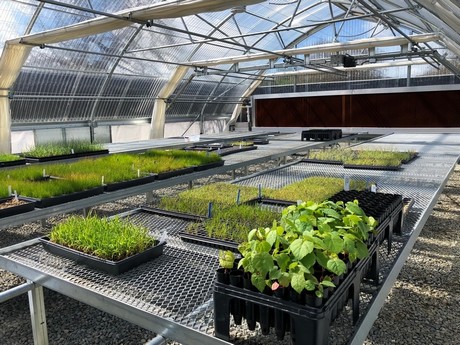 With a 980 square foot greenhouse from Agra Tech, Ingolia is overseeing a project that is unprecedented and a learning experience for all involved, she said. "This has not been done before, so it's unknown territory here. Our greenhouse is equipped with a swamp cooler in the back and with powerful fans in the front of the structure, so that we will be prepared during the summer. We also have a series of rolling benches to move the seedlings around more easily."

Mia Ingolia has a very important role at the Sunol Native Plant Nursery as a Biologist for the Natural Resources and Lands Management Division. Her projects entail much more than simply gathering seeds and creating seedlings, so Ingolia and her team consisting of Chief Nursery Specialist Bree Candiloro, and a group of recent graduates who specialize in environmental science, landscape architecture, and botany are using their knowledge and experience to germinate seeds from more than 120 different native plants.

If all goes as planned, these seeds will sprout into little plants and put into the ground as landscaping around the new Sunol Corporation Yard, which is under construction now as part of the Sunol Yard Long Term Improvements Project. Should it prove successful to grow pathogen-free plants for the Sunol Corporation Yard and Alameda Creek Watershed Center, the team will consider continuing their efforts to provide native plants for restoration and mitigation projects in the Alameda and Peninsula watersheds. 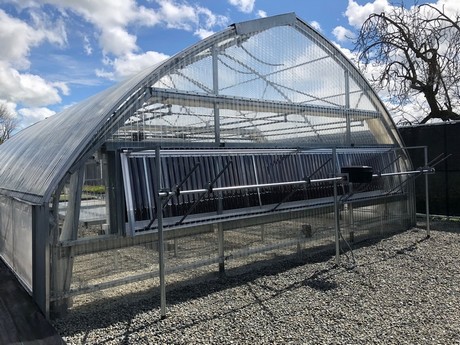 North Slope 24 Greenhouse from the outside

Constructed by AgCon of San Jose, CA, the Sunol Native Plant Nursery's greenhouse was in full use by October 2018. "It took roughly two months for it to come together and everything went smoothly. AgCon brought in a crew of 4-6 people and it was great to see it up and in operation, because we began the planning process a full two years ago. We marked out the foundation in 2017 and the greenhouse is doing exactly what we envisioned, so that's definitely satisfying."

Ingolia also has praise for Agra Tech's customer service and expertise. "From the beginning, James Roberts at ATI was our point person," she said. "He was amazing and was more than willing to help us through every aspect of the planning and construction. It was very helpful to be able to rely on James and tap into his extensive knowledge. We asked a lot of questions along the way and he was always there with the answers."

With thousands of seedlings currently sprouting within their ATI greenhouse, the Sunol Native Plant Nursery is bringing two years of hard work and planning to fruition. By taking these new shoots and putting them into the ground to grow pathogen-free plants for the Sunol Yard Long Term Improvements Project, this endeavor may be continued for future restoration and mitigation efforts in SFPUC-owned lands in the Alameda and Peninsula watersheds.