Russian tulip cultivation has experienced major growth in recent years, both in terms of numbers and professionalism. At the FlowersExpo in Moscow, we spoke to three companies that can attest to that: Havatec, known for its cut flower bunching machines, Nova Agro, partner of Havatec and all-round supplier to Russia's professional horticulture industry, and Russian tulip grower Atena from Orenburg, around 1,500 kilometers southeast of Moscow, which recently put into operation two TulipStar bunching machines by Havatec. 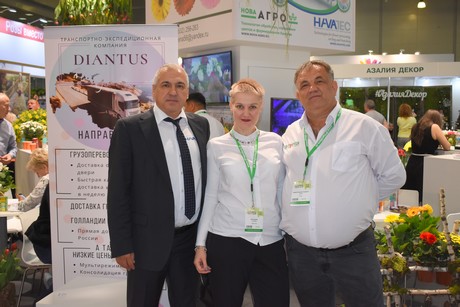 "If five years ago you had told us we would sell two TulipStars in Russia, within one year, we would have laughed", says Havatec sales manager Antonio Dos Santos. "But not anymore. The available budgets have increased, or at least there is interest in serious automation. When we talk to potential clients now, it's more often about why semiautomatic solutions are still being considered when it can also be done fully automatically."

There are still differences with for example the Netherlands, but Antonio points to a number of main parallels. "In order to continue to compete, growers need to innovate. At the same time, labor and energy are big expenses, and with everything appearing to become more expensive while the price of tulips stays the same, automation and sustainability are vital. This also applies to Russia and the Russian grower. Because market conditions are good now, they're more willing to make investments like these."

Two TulipStars
The customer, who had both TulipStars flown in, confirms this. Seven years ago, Andrew Reznik of the Atona nursery started growing tulips. "We began with 1.5 million stems a year, but right from the start we grew by that number every year. Last year, 12.5 million tulips were shipped, and next year we're hoping to grow to 14 million."

It's true that the ruble is low, but that works both ways. A TulipStar needs to be paid in euros, which is expensive, but interest from abroad for his 'cheap' tulips is also growing. "Actually, it can be 1 to 100 for all I care," Andrew laughs. Our competitive position compared to Dutch growers would only get better."

"Yes, but not for us!" laughs Natalya Novikova, CEO of Nova Agro and Havatec's partner in the Russian market. As a supplier, she is in touch with growers a lot and knows the market well. She confirms the picture painted by the two gentlemen above. "We're seeing production increase a lot, especially in the run-up to the major spring holidays. A number of growers are crossing the 10 million stem threshold, a development we also see in gerberas and a number of other products. And indeed, they, like Atona, are willing to go for more serious investments. After all, you don't buy two TulipStars if you don't have faith in the market."

Market
By far the largest share of tulips is for the domestic market, however, also those supplied by Andrew. One of the big consequences of scaling up - in part undoubtedly as a result of prior trade obstructions, but that's for another time - is that Russia has become more self-sufficient. The Dutch tulip is expensive, transport is expensive and the way to the consumer is shorter, giving them a fresher product. "For the coming years I don't expect any major changes", Andrew concludes. "The major change is behind us. Over the coming years, growers will further develop their companies and produce more and more efficiently. We will also put our focus here, and the two new TulipStars are a good example of this."