Last summer, Varinova and Syngenta Flowers agreed on a joint cyclamen future. A recipe for a spectacular flowering trial, which the breeders traditionally organize around this time of the year. The entire assortment can now be admired at two locations, both in Andijk and Bleiswijk.

Marleen van Balkom and Carolien Klein in the greenhouse in Bleiswijk

Both breeding programs are currently being integrated. Around 450 varieties have been included in the entire trial. Of these, around 350 come from in-house breeding, the remaining varieties come from other breeders (Schoneveld Breeding and Morel). "Of course we do our very best to make all varieties, including those of the competitor, look their best", laughs Bart Kuijer, former owner of Varinova. "You want the customer, trader and grower to get the best and as complete as possible picture of what the entire market has to offer." 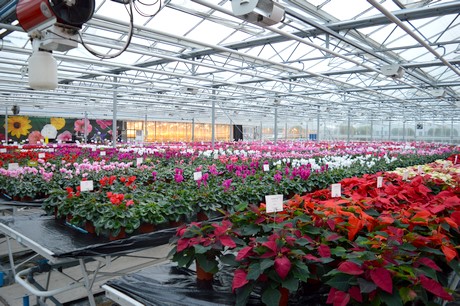 The presentation in Andijk, where also poinsettias were shown

The whole idea of organizing the flower trials is therefore primarily to get feedback from traders and growers. For that, you also need the varieties from other players in the market. “Of course there is overlap, and some varieties supplement each other. Everyone has their strengths and weaknesses, and you can best discover that by putting everything together. Ultimately, only the best crossings can continue," says Carolien Klein.

Breeding is the art of throwing away, and if you have to choose from literally hundreds of varieties, all of which have actually been stamped ‘good’, you understand how difficult that is. "In short, good varieties will also be rejected, so that we only retain the best," as marketing manager Marleen van Balkom adds. “We now have that luxury position, since we have been able to merge both assortments. And of course we can't put 350 varieties in the catalog."

It is still quite a puzzle to join both programs together properly. Does one existing series supplement the other, will there be completely new ones, where are the main areas for improvement and what should be preserved at all costs? "One thing is certain, by combining the strong points of both parties, we are going to take the assortment to a new level."

Finally, the flower trials have one last extra dimension. The use of inhibitors is an issue in cultivation. Their use is being pushed back further and further, and more and more resources are gradually being cancelled. That is why it is now important to already look carefully at how it can be done without it and which composition of the potting soil is optimal. Syngenta, which has its own Crop Protection department, naturally has started to work on this.

The trials at both Andijk and Bleiswijk can still be admired in the coming three weeks. They will also be open during the trade fairs at the beginning of November, and professionals will be present to show visitors around.