A look in the greenhouse of Middenweg Flowers

Sky is the limit for this Dutch iris grower

"Can you make a living with irises? We cannot speak for others of course, but we are doing very well. We are growing in numbers every year and the customer is happy to pay a few extra cents for our stems." 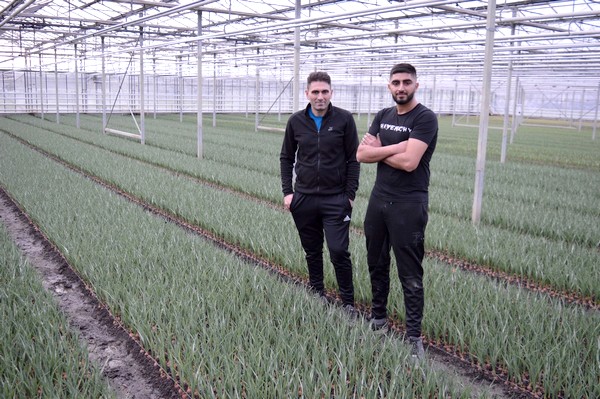 Father and son Kaya are the men behind Kwekerij Middenweg Flowers. From the first day, more than 15 years ago, they have focused on the iris and the company is successful in many ways. In the first place, Murat, as newcomer, had to win the trust of customers. Then he had to make sure he had the best flowers, and if possible, year round. In the third place, he had to prove his mettle, running a nursery is just really hard work.

Right timing
The market is small. The iris, like the tulip and the hyacinth, is a spring flower and in this time of year there are various growers which also temporarily supply the iris. This is the first reason Middenweg Flowers can distinguish itself, because, as a crash course in growing irises shows, you have to know what you are doing. It is not rocket science, but particularly irrigation, temperature and moment of harvesting require the right timing. You really cannot do without some years of cultivation experience and you have to be taught this. In Murat's case: in his first years in the Netherlands, he was happy to work at Peter Veenman, Kwekerij Veco. 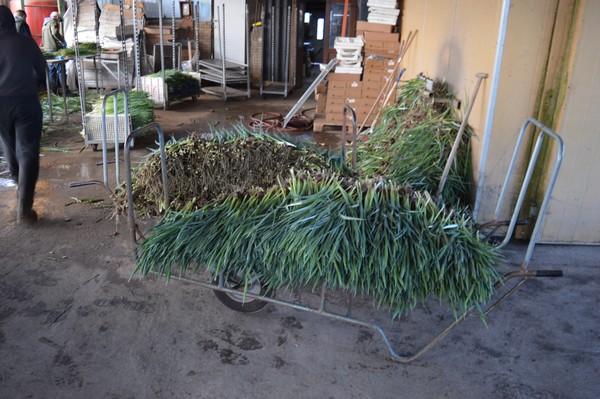 Harvesting from early in the morning till late in the afternoon

Year round
It is a large challenge to be present in the market outside the high season, which just started. A Blue Magic, perhaps the easiest and most 'standard' iris, can be manipulated, but other, more exclusive varieties, are much harder. Moreover, you have to grow it outside because inside the greenhouse it gets too hot. For this reason, Middenweg has a hectare outside field but it still is not easy. Every time a lot is planted, it is covered with a decimeter straw, which not only retains moisture but also temperature. At the bottom, it does not cool down too much during the night and the bulb stays cool during the day.

Besides Middenweg, there are only two other growers which offer irises year round. Of these three, Kaya is the only one who does not produce everything with a contract and for only one customer, but also supplies a number of traders and is present at the auction on all days. "Even if it is just 1 bucket, Middenweg Flowers has to be present at the auction in Naaldwijk, the Netherlands, every day and since recently, also every day in Aalsmeer."

From hundred thousand to 7 million
As mentioned, the high season has started. Soon, 800,000 pieces will be harvested and in the coming months about half of what is produced in an entire year. Half is going to Russia (particularly for sale during Women's Day), around 20% to the UK (UK Mother's Day) and the rest to the other European countries. Remarkably, the iris is almost unobtainable for Dutch consumers in the Netherlands. When Kaya started, he had a few hundred thousand stems, and now almost 7 million. 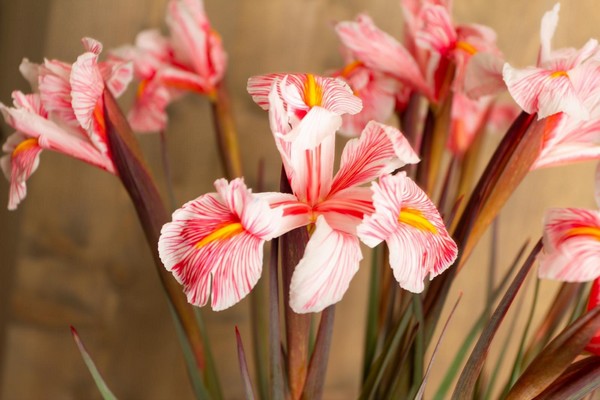 And what are the plans, what is in the pipeline? A lot. Since a year or two, his son Can has joined the company and Middenweg Flowers, with some trade show participation, a new logo and some new customers, has received more attention. He also experimented with painting, and has successfully introduced the Scarlett. On a limited scale (painting is expensive, it requires a lot of work and you cannot have too much for market technical reasons), other colors are available: Iris Sapphire (blue), Iris Magenta (lilac) and Iris Celadon (green).

A long-held wish was to exchange the two rental greenhouses for their own greenhouse. There are not yet concrete plans to do so, although Kaya always keeps his eyes open. It is very well possible that another wish will be fulfilled: the acquisition of a nursery in Portugal. The old teacher, the above-mentioned Peter, is considering retirement and to sell his nursery to Middenweg. If they could start there, Middenweg would really be able to offer all varieties, even the most exclusive, year round.

Left, a view of an older greenhouse, a new one on the right

Last but not least, there is breaking news. It is very probable that the company will join Decorum this year. The company will probably join decorum at the end of the year. In short: "they want us to join and that is mutual!"