How the SKYfamily story of Selecta one began, thrives and continues

Petunia NightSky: The birth of a tiny universe

Receiving awards year after year, Selecta's petunia NightSky has become a well known variety along the chain and around the world. The pattern of the flower combined with the short culture period seem to have made it a lucrative product that is being sold millions of times. And further colours with the sky pattern followed, creating the SKYfamily. But how did it all start? We will explain it in this article.

Never seen spotted pattern
The story of the NightSky started in 2012. The goal was to obtain a new color combination or design, but among Selecta’s crosses combinations of a spotted pattern on a part of the plant or even, only parts of a few flowers were noticed. "We were surprised by this absolutely never seen spotted pattern", says Antonella Capo, Breeder at Selecta one. “A that point for me it was a matter to stabilize and select the “right one” among the obtained progenies: NightSky itself showed to be a great variety because of the combination of its special color together with a great plant with good habit, branching and healthiness.” 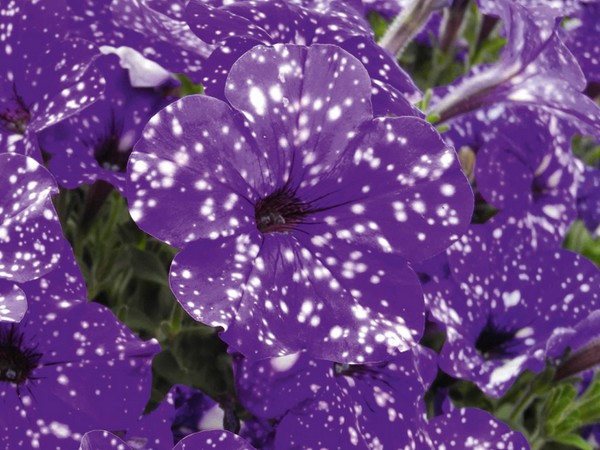 A galaxy of possibilities for storytelling
And so, the story began: “The first look on the plant reminded us immediately of a sky full of stars – so the name was soon clear”, says Milena Weller, Communications Manager at Selecta one. Every flower on the NightSky Petunia is a tiny universe and according to Weller, it  offers a galaxy of possibilities for compelling storytelling in the retail outlet. “People have always been fascinated by the view of the night sky and so we were convinced that they will be the same from our Petunia. We thought of summer nights and evenings on the terrace and balcony and dreaming under the stars – the magic of summer.”

Awarded year after year
And the potential of this variety was recognized quickly as multiple awards were received after the introduction. The first award received was the “FleuroStar Award” 2015 in Europe. For this award, a jury of experts choose the winner with the 'wow'effect at point of sale. But also within countries, it was awarded several times. "In France, for example it won the “Gold Innovert Award” in 2016, and in the same year, the “Medal of Excellence” in the USA and “Best Bedding and Pot Plant” in the UK in 2017 (GB), just to name a few."

Hot on social media
The appearance of NightSky is what is attracting the attention of many consumers and over the years, many pictures on social media have been posted expressing the consumers' love for the beauty of this product. And still, after being several years on the market, NightSky seems to be a hot variety on social media. Below just some examples. On top of that, Ultra Violet was even the Pantone color of the year 2018 in which they linked the color to the galaxy and night sky. "NightSky became a brand, a must have and trend product – everyone knows it, everyone loves it – no garden centre without it and everyone still can't get enough."

Short culture period
A product might look astonishing, but if it doesn't perform well, growers won't put it in their greenhouse. And NigthSky seems to have it all. "Producers say the short culture period of only 6 weeks makes this vigorous Petunia a very lucrative product. The stability of its flower pattern has boosted demand enormously. Also, the production of hanging plants in colour-coordinated pots is great: an absolute eye-catcher for the end consumer and a bestseller." 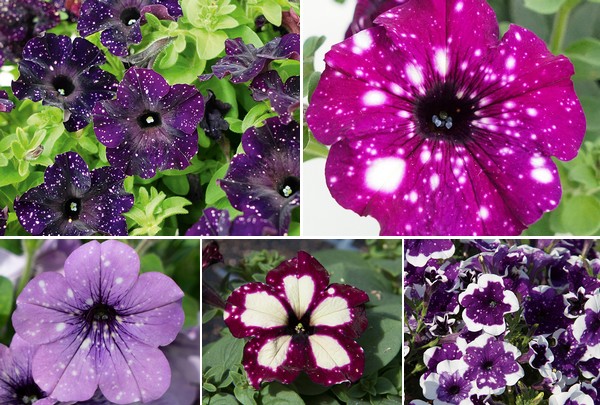 Creating the SKYfamily
Further colours with the famous sky pattern followed after, creating the SKYfamily. Right after the introduction of NightSky, the breeders at Selecta one continued breeding and added five new varieties, namely the dark Mystery Sky with fine light dots, the noble Royal Sky with a bright purple flower pattern and the fine Lavender Sky. New varieties in recent years are the varieties Lightning Sky, a yellow star and dot pattern on a dark red ground, and Glacier Sky, with the well-known starry sky patterns, but in addition the brilliant white border. The varieties can be presented at the POS in the form of printed pots, labels, promotion posters and banners.

SKYfamily concept
To have a uniform communication, the marketing team of Selecta one decided to introduce the SKYfamily concept. "It has a stunning key visual which is used in the form of printed pots, labels and promotion posters and banners. It enables growers and especially retailers to market and promote the complete series of legendary Petunias”, says Weller. The concept design can be adapted to individual customer demands with respective offered varieties. "The single NightSky concept is still available, of course", she adds.

Successful
According to Weller, the SKYfamily has become a success as well. "All in all, the quality of the product, the successful marketing campaign and the whole SKYfamily is sold millions of times."