The desire to not have to move through the greenhouse on your knees to plant the crops goes way back. Planting lily bulbs is a precise and challenging job. The bulb always needs to be placed with ‘its nose pointing up’ and, if possible, all at the same depth. Over the years, there have been multiple attempts to develop an efficient and robust machine to do this job, a machine that the engineers of Hans van der Poel, together with seven growers, can now proudly present. 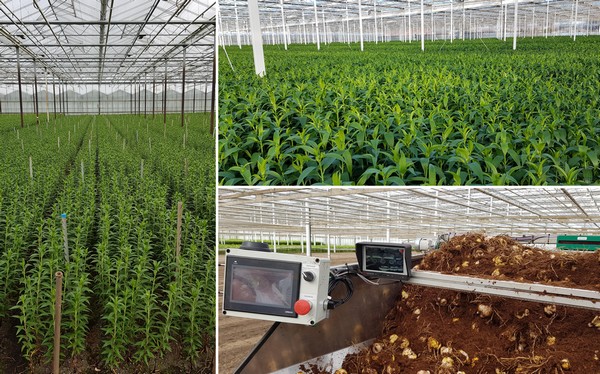 Lovely and equal crops thanks to uniform plant depth

“There hadn’t been an engineer to fill this hole yet”, says Hans. “A lily is a difficult bulb in terms of its shape. It has scales and roots on the bottom, which makes it difficult to get them to fit neatly in the holes that are drilled for them. Previous machines faced the problem that the holes they drilled easily collapsed again. We have developed a special drill plate that, after drilling the holes, neatly pushes the soil back as well as flattening the ground. A robotic arm places the bulb into the hole, after which the hole gets filled up again.”

About seven years ago, a variety of growers all pitched in together. The government pitched in as well, and a tender was written which Hans subscribed to as well. “Before that, attempts were made by a couple of other machine manufacturers, none of which became particularly successful”, Marc Noordman, one of the growers at Novastar Lilies, adds. “About half of the growers cultivate in trays which are already more advanced in terms of automation. They are able to plant centrally and have planting machines, planting robots, and entire planting lines. We still work by hand, with a shovel, bulb by bulb. Although we have colleagues who use a sort of lettuce planter, we have never seen the added value of doing so.”

Because of this, as well as a previously well-functioning freesia planter designed by Hans, people now dare to invest. “There are all sorts of different types of soil, and everyone plants in a slightly different way. In terms of harvesting, it can easily make one or a few days difference. You can set the machine for let’s say 10 centimeters, and then every bulb will be placed exactly 10 centimeters into the soil. Combined with the fact that the machine is mechanically sound, together with a small group of growers, we have bought a prototype together. To test the machine, we used it to plant 800,000 bulbs, and it is now being used as a test run at Ruud van der Hoeven of Qualily. They have much thicker bulbs then we do, so it’s interesting to see if things run as smoothly there as they did with us. Also, I have purchased a third, more developed machine variety. If things go as planned, the new machine will be delivered in September and will be used to plant in one of our gardens where we plant 8 million bulbs each year. If it goes well, we might buy another one in the future to use in one of our other gardens.”

Novastar plants about 20 million bulbs each year on a variety of locations. With the new planting machine, they expect to reach about 6,000 bulbs an hour with just two employees. This results in more than double the amount planted when using the traditional way in which about 1,200 – 1,500 bulbs are planted per hour by one person.