Dutch Schlumbergera grower on the Aqua-Hort

"Loss cut by half with this machine"

For 1.5 years now, an Aqua-Hort machine has been running at Dutch grower Hofland Flowering Plants. With this machine, the water gets an electromagnetic treatment, which kills the harmful bacteria and other microorganisms. While the technical part of the story may sound like hocus pocus to many, there is no doubt at all regarding the efficiency of the machine. "While we used to have 6% loss, it is now only 2 to 3 percent." 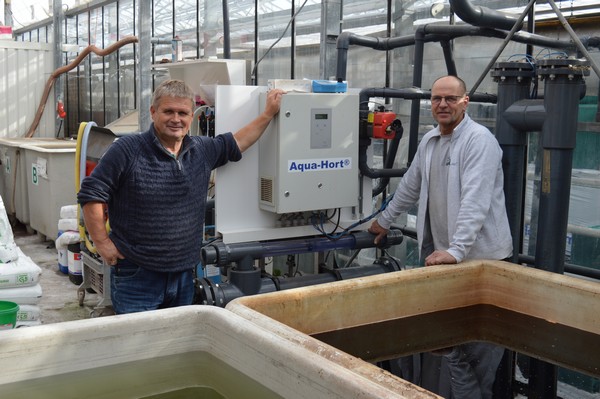 Goos Hofland and Ron van der Hoeven with the Aqua-Hort

This is explained by Goos Hofland, who grows Schlumbergera in Naaldwijk, the Netherlands. "The loss was mainly due to Fusarium, a very vicious fungus that shows itself in the final weeks of cultivation and literally destroys the plant. And the cultivation process takes a year. Since we've been using the Aqua-Hort, the loss decreased drastically and has helped us a lot."

Through copper and silver...
The Aqua-Hort is developed by Danish company Aqua-Hort and currently runs at hundreds of growers all over the world. Particularly in the tulip, potted plants and also in vegetable cultivation on substrate, they are often used. Aqua-Hort implements a controlled electrolytic fertilization of copper, or silver, and an electromagnetic water treatment to the nutrition water. With the Aqua-Hort, water runs through several copper or silver bars. The bars are under live voltage which produces a number of charged particles that end up in the water. They often easily unite with the negatively charged particle microorganisms. Copper destroys the cell surface, which often suffices. Silver, however, invades the cell, which in some cases increases the efficiency.

"Sometimes, silver only is preferred, but it depends on several different factors, what quality and which combination is most effective. In this case, the decision has been made for a combination, because the copper works well against Pythium and Phytophthora, but to attack Fusarium successfully, added silver is advised", explains Ron van der Hoeven of VDH Watersystemen, dealer and installer of Aqua-Hort in the Netherlands and Belgium. "Special about the installation here is that they have chosen for a bypass in the water system. Only a part of the irrigation water, about a fifth, is being treated with the Aqua-Hort. That is being done to dose the silver in PPBs accurately."

...going for gold
"You need to see it as a link in the whole process", concludes Goos. "Many other aspects are important: good hygiene, clean tubes, good nutrition - all contribute to a good water quality and in the end a good product. In the end, there is also a lot to gain regarding the strong varieties. Over time, we expect the percentage of loss to decrease even further."

Catching up
Hofland grows on 5 ha of land, of which 3 ha is greenhouse, primarily Schlumbergera . Besides, he also grows several other varieties like Dianthus, Exacum and some spring crops. The sales usually peak in spring and fall. However, due to corona in March, the turnover of Schlumbergera dropped significantly. Unfortunately, they could not benefit from the good sales in summer months as they have no products in these months. So, catching up is needed. 40 percent of the supply is about to leave the greenhouse; the coming months, over a million of plants need to be sold which will enable them to catch up.