Valentine's Day has been a good one for flower growers this year. Sales at the Dutch auction Royal FloraHolland were 33% higher in the two weeks before Valentine's Day, compared than last year. Traders, however, were moderately positive as they had to deal with high purchase prices in the run-up to Valentine's Day, reports VGB (the Association of Wholesalers in Flower Nursery Products). But how was it in the rest of the world and for the last link in the chain, the florists, this year? Overall, in the run-up to Valentine's Day, we saw the demand for roses was surpassing the supply, as we reported last Friday. However, more news has been published since. All in all, florists seem to have done a good job as well. Below an overview. 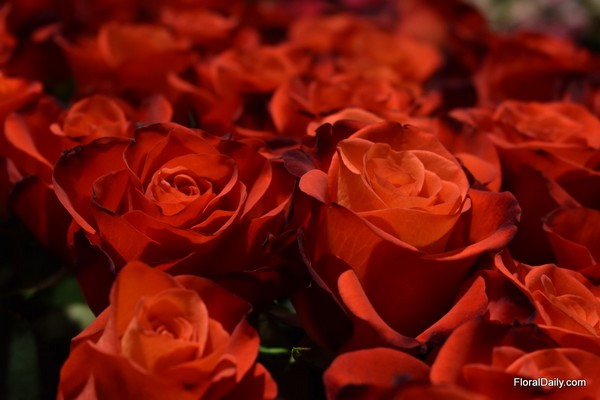 Fiorella, a variety from breeder Meilland

Average price 25% higher for roses at Royal FloraHolland
A total of 152 million roses were sold in the two weeks leading up to Valentine's Day. The average price was about 25% higher than last year, Royal FloraHolland reports. Next to the rose, the tulip and chrysanthemum were also popular. "Together, they accounted for more than 60% of flower sales. Rose sales in weeks 5 and 6 were over 45% higher than last year. For tulip and chrysanthemum, the difference with 2020 was plus 29 and plus 18%, respectively. The share in total flower sales this Valentine's period for Rose is 33%, Tulip 18.5% and Chrysanthemum 11%."

Europe: Traders moderately positive
Traders are moderately positive about the run-up to Valentine's Day, VGB reports. 'The purchasing prices of flowers were higher than last year, making it difficult to achieve margins,' Paul van den Oever of Kariflex B.V. told VGB, active in the European market. 'Despite higher flower and air freight prices, we recorded a slightly higher volume, and substantially higher turnover,' Carlo Vijverberg told VGB, managing director of Florca B.V. The flower export company specializes in air freight to distant destinations and says it is satisfied with the progress. "The majority of our Valentine orders left before last weekend's winter storm. Fortunately, the shipments that left last Tuesday and Wednesday were not affected by the cold and snow,' adds Carlo Vijverberg. At Kariflex too, all deliveries for Valentine's Day arrived at the customers. 'The winter weather cost us some more effort, but did not cause any major delays,' says Paul van den Oever.

Flowers flown worldwide
LATAM Cargo Group , who mainly ships flowers from Colombia (Bogota, Medellin) and Ecuador (Quito), ad a positive performance during the 2021 Valentine’s Day season, which, together with Mother’s Day (April and May) represents the peak of the fresh flower export activity. In 2021, the company carried 7% more flowers than in 2020, totaling more than 13,200 tons, reports eturbonews.com.

Also Turkish Cargo shipped flowers this year. The total numbers were not published, but we came across the following video in which the Youtuber was Inside a cargo plane with 64,000 kgs of fresh flowers for Valentine Day delivery. The flower came from Kenya via Istanbul to the UK. See below the video to get an insight.

IAG Cargo has transported nearly 450 tonnes (approximately 18 million stems) of cut flowers for Valentine’s Day from Nairobi to London Heathrow and the US, reports www.logupdateafrica.com

“This season has been a little bit busier than expected, just because of everything that has been going on with the pandemic folks are really taking advantage of getting the floral arrangement for their significant others or their friends and family,” Aston Critchley, owner of Bessie Floral Designs in Fayette County (WV), told wvnstv.com.

“I’ve seen a trend for more flower and gift sending, maybe more, there’s peaks where it peaks out, there’s a lot more, you can’t see your loved one, so send them flowers, send them a box of chocolates, send them some balloons!” florist Duke Psoras, told baltimore.cbslocal.com

"...while the pandemic may be changing the way business is done, it hasn’t dampened people’s desire to say “I love you.”," reports sanfrancisco.cbslocal.com

Other parts of the world
Pune (India): Low on budget but high on love, post-pandemic Valentine’s Day marks new era

In Europe, Valentine’s Day flower looks famous despite the cold and the Corona crisis.In Pune, India, however, florists told indianexpress.com due to low supply and putrescibility of red roses, the Valentine’s Day market saw a slump this year. "Manoj Kumar, who has been selling flowers on MG Road for past 30 years, said although sales last year were hit due to sluggish economy, it was still 70 to 80 percent better than this time." Also in South Africa Valentine's Day was less rosy. Florists across KwaZulu-Natal are feeling the Covid-19 financial pinch and Valentine’s Day will do little to bring back the sweet scent," reports iol.co.za