Gerbera grower Holstein Flowers is celebrating its 75th anniversary. Over the years, Holstein Flowers has grown into a well-known gerbera player with more than 140 exclusive gerbera varieties. As of this month, the special anniversary logo will be displayed on various expressions of the company.

“The 75th anniversary is a special milestone of which we are extremely proud,” says general manager Leo van Holstein. “Of course we don't want to let this go unmarked. Due to corona, the options are unfortunately limited. Hopefully more will be possible later this year. With our anniversary logo it is in any case visible that we have something special to celebrate. Moreover, in honour of our anniversary, we are adding a new gerbera group to our range: the Gerpastas, with curled petals in special color combinations. These will be available from the summer.” 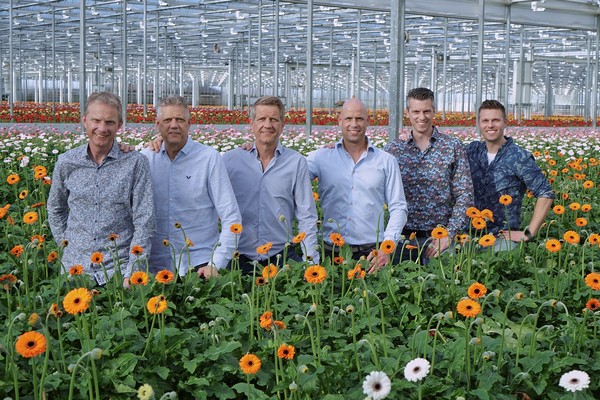 Third generation
75 years ago, father Henk van Holstein started growing vegetables, such as cucumbers and tomatoes. One by one his sons joined the company and the switch was made to gerbera cultivation. The third generation is now also at the helm.

With almost 11 hectares spread over two locations, Holstein Flowers has grown into one of the largest gerbera growers. Leo: “We are very proud of where we are now: a close-knit family business with an extensive range, the latest cultivation techniques and a strong breeding department complete with selection greenhouse, laboratory and flowering area. Innovation has always been a spearhead and it will certainly remain so in the future. ”

Exclusive varieties
Gerbera grower Holstein Flowers in De Lier offers a very wide range of gerberas. From the classic gerberas to exclusive specialties such as the spherical Gerponi's, playful Gerspiders, tiny Germicro's and the new curly Gerpastas. The grower creates new gerbera varieties in their own breeding department. Only the best varieties get a place in their collection.