Horticulture is the biggest contributor of non-packaging plastics usage on farms across the agriculture sector, but there are initiatives underway in Australia to help recycle and re-use the material in environmentally-friendly ways.

Product Stewardship Consultant, Ed George explains that the total amount of plastics consumed in Australia each year, across all sectors, is around 3.5 million tonnes, and the bad news is that based on the projected future trends that will grow to 7 million tonnes by 2050. Of that, only 15 per cent is being recycled in total, but in agriculture, that figure is more like 7 per cent.

He has been involved in a project with an environmental and agricultural consultancy agency, RMCG, looking at plastics across a range of different types and usages, apart from the packaging itself.

"We have come up with a number of approximately 110,000 tonnes per annum, used across agriculture and 67 per cent of that is in horticulture," Mr George said. "That equates to 74,000 tonnes of plastics a year, and only around 7 per cent is getting recycled. In terms of the berry sector, the products we are having to deal with include piping and irrigation, protective films, nets and mesh, pots, drums trays, ropes, twines and bags. Unfortunately (after usage) a lot is being burnt and buried, and with the recent rain a lot of plastics have ended up in the creeks and streams, which is not what we want." 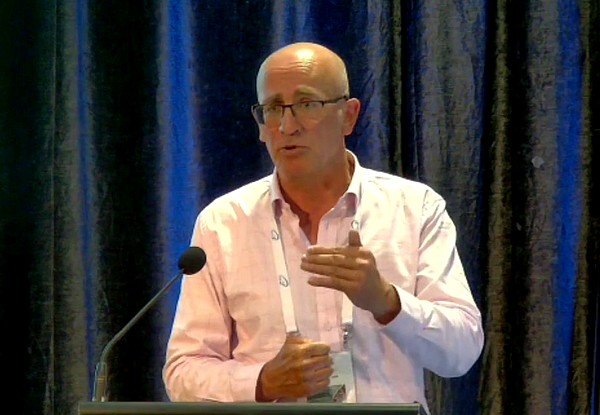 Mr. George added that the main way that plastics are recycled in Australia at the moment is through a process called mechanical recycling, but other options are being developed.

"That is exactly what it sounds like, you are shredding plastic, you are washing them, you are reconstituting them, you are heating them up and turning them into something that can be used again in other moulding processes," he said. "There is a whole emerging area called advanced recycling, and that is pretty much about taking the polymers back to their molecular level so that you have a substrate that you can make decisions with as you proceed, whether that is going to go into fuels or back into monomers or polymers and turned back into plastics."

There is pressure to do more coming from the government as well as consumers, according to Mr George, who wants more sustainability within supply chains, which is also pushing down through the major retailers.

"Also, the waste costs are increasing and landfill levies are going to go up - it is not only a revenue source for the government but they are also trying to reduce what is going into landfill," he said. "It correlates with their targets around waste, and it is expensive as some regions are getting quite full, so the enforcement at the other end will also be increasing. The Government is throwing serious money at it; $250million to date around infrastructure to start to aid the recycling gap that exists in the sector - and the industry is taking notice. We are expecting capacity to increase exponentially in the next 2-3 years. While another approach that was taken up in Europe, is towards a 'lifestyle approach', in particular from suppliers to how they treat their materials." 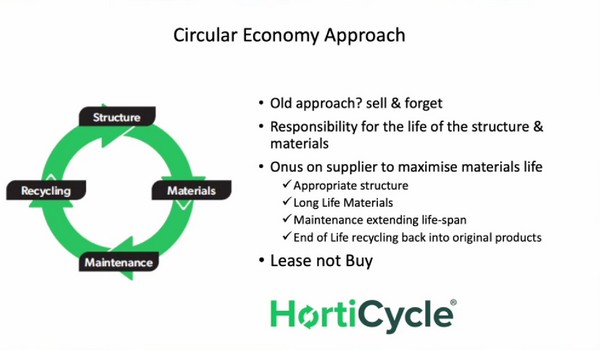 One of these approaches that Mr George is working on with Greenlife Structures and Tapex Group is a circular economy, also known as a plastic stewardship program called “HortiCycle” in the NSW North Coast region. So, the materials that are used in structures are going to be at the point where they can be recycled at the end of life and re-used.

"So the tunnel films that we are recycling at the moment are going back into films again rather than being downgraded into lesser level products," Mr George said. "The old approach from many suppliers is to sell and forget; in fact, if the product needs to be replaced sooner, suppliers sell more products. This is the complete antithesis to that approach, as it is taking responsibility for the life of the structure and the materials. So, the onus is on the supplier to maximise the life of the materials. In the case of the HortiCycle program, it is about getting the appropriate structure, getting long-life materials and maintaining those materials. For example, extending the lifecycle of the structure and materials up to 40 per cent by some simple maintenance. It becomes more like a service than a product."