Bergcamp and Degramec together invented 'potting plan 3.0' for the nursery

"With this potting robot, we are not only more efficient, we can also have more plants in the greenhouse"

Bergcamp Nursey worked together with Degramec to improve the potting process of the nursery. Now they have come up with a solution specifically aimed at the nursery's needs: 'Potting plan 3.0'. Walter van den Berg of Bergcamp nursery and Maarten Acke of Degramec tell us more about it. 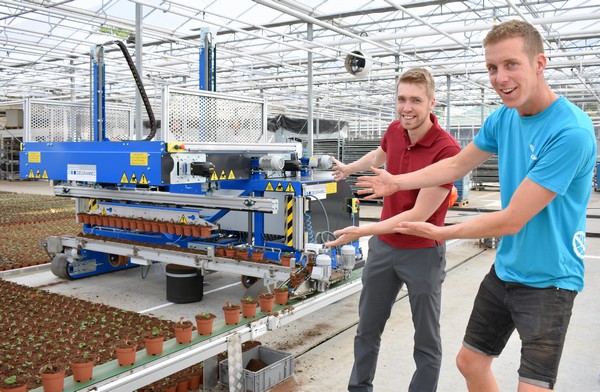 Maarten and Walter with the new machine

Walter van den Berg
Walter (34) runs Bergcamp Nursery together with his brother Robert (36). The company was founded by their father and now has three greenhouses. "We grow seasonal products, cyclamen, campanula and pelargonium. We have been busy looking at how we can improve the potting process. We were looking for machines with overcapacity to cope with future growth. We call it Bergcamp Potting Plan 3.0," says Walter.

"In the last 3 years, we have compiled a list of practical things that could be done even better and that would make us more efficient and better. During this time, we have mapped out all breakdowns so that we could eliminate them." 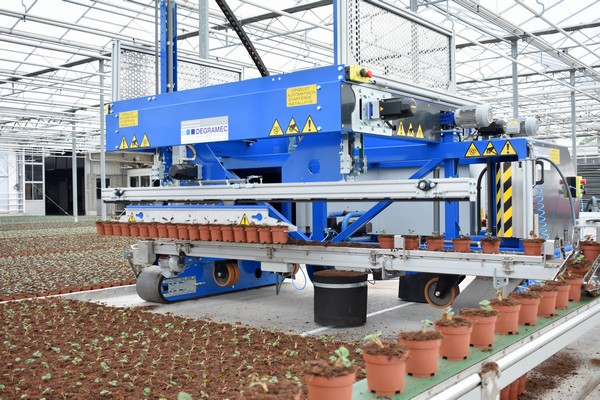 "Before that, Maarten came over with some machines to see what would suit us, so they were involved early on in the process. So we designed and conceived it together from scratch. In the end, it took more than a year, with a good result.

Benefits of the Degraplace 3.0 machine:

Maarten Acke
Maarten Acke of Degramec followed the project at Bergcamp and worked with Walter to find a solution to the grower's problem. "Selling a standard machine is always possible, but we prefer to look at each client specifically to see what they need and then to make a robot or machine that seamlessly connects to the client's needs or problems. What we have done together with Bergcamp is an excellent example of this," says Maarten about the project.

"The second robot that we have now delivered to Bergcamp is also completely tailored to what they needed exactly. If you look at the buffer, the fork that is only half the width of the machine, the put-away system that goes over the belt instead of under it, the width of the robot itself so that it can be transported in the truck, the high capacity, being able to put away up to 10 cm from the façade, etc, then you see a unique robot that is currently not found anywhere else."