Knocking out genes is a great way to learn what they do. After all, if you prevent a gene from doing its job and you notice changes, it’s very likely the gene has something to do with it. There is a caveat, though. Mutations in genes that are required for basic cellular functions and/or reproduction often interfere with the generation of homozygous mutant plants, precluding further functional studies. Additionally, some genes have different functions in different parts of a plant, so the effect of a gene in one part could mask the effect elsewhere.

Now, a team from the VIB-UGent Center for Plant Systems Biology, led by Thomas Jacobs, Moritz Nowack, and Tom Beeckman devised a CRISPR-based tissue-specific knockout system, CRISPR-TSKO, that enables the generation of somatic mutations in particular plant cell types, tissues, and organs. The efficiency of CRISPR-TSKO opens new avenues to discover and analyze gene functions in spatial and temporal contexts of plant life while avoiding pleiotropic effects of system-wide loss of gene function. The work was published in Plant Cell. 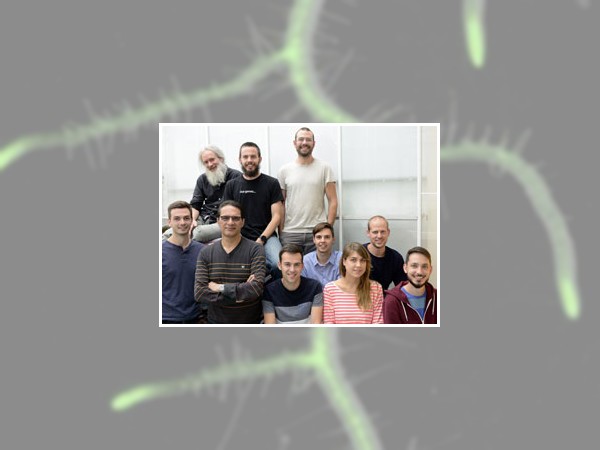 Thomas and Ward Decaestecker (one of the first authors of the study and working in the Thomas Jacobs lab) answer a couple of question about the breakthrough.

As a child, could you have imagined doing something like this?
Ward: “One of my all-time favorite movies is the first Jurassic Park movie from Steven Spielberg. In this movie they recreated dinosaurs from some DNA found in a fossil mosquito. I always imaged it would be a fantastic job working for InGen, the fictional company in the movie. In the latest movies they even started to genetically engineer dinosaurs. The CRISPR technology would be an excellent technology to do this engineering. In our publication we used this technology to engineer Arabidopsis, a small model plant that is actually a weed. Applying CRISPR to edit the DNA of a weed is exciting, but probably not as exciting as engineering a dinosaur.”

Where did the idea for this research come from?
“Thomas: “Rafael (co-first author working in the group of Moritz Nowack) is always stopping me in the hallway to ask hypothetical questions on ways to use CRISPR for developmental biology. One day he asked about making tissue-specific knockouts so that they could study knockouts specifically in their model system, the lateral root cap of Arabidopsis. I didn’t think it was going to work as we often observe chimeric mutations using constitutive promoters and I thought the same would happen with tissue-specific promoters. That is, some cells in the tissue would be knocked out, but others would still contain the intact gene and be expressing it just fine. Nevertheless, I offered to help and got him in contact with Ward.

Ward generated the initial constructs for Rafael to check in plants. And after the first proof-of-concept experiment we immediately saw that this was going to work. A number of individual lines were completely knocked out for GFP expression only in the lateral
root cap.”

In a hypothetical world where funding and time are not an issue, how would you like to follow up this work?
Thomas: “We would develop a larger collection of tissue-specific promoters and test these with numerous genes that are essential for plant growth and development that cannot be investigated otherwise. It is really challenging to work with essential genes, and I think this system can be used to challenge some long-held theories on the function of certain ones.”

What was the most pleasant aspect of the entire process from study design to publication?
Ward: “The teamwork. We had a lot of meetings to coordinate the research, writing and revisions. Everyone put in a ton of effort and together we got the job done.”

Thomas: “Indeed, collaboration was key in this project. My group and Moritz’s were collaborating from the start and were perfectly complementary. We were able to make the vectors rapidly and evaluate the DNA mutations. Mortiz’s group was able to evaluate the phenotypes. As we wanted to expand the biological significance of the project, we wanted to target additional tissue types and genes. For this we asked Tom Beeckman’s group whether they would like to join as they work on root development. Nick in his group suggested targeting YDA in the stomata which led to a spectacular phenotype. We then needed to determine if DNA mutations were actually occurring in these specific tissues. In some cases, this was technically challenging as only a few cells, 5-10% or fewer, of the entire plant were actually targeted. For this we needed the help of Gert Van Isterdael at the VIB Flow Core. After sorting the cells from thousands of seedlings, we were able to clearly show we had specific DNA mutations. A great example of what excellent teamwork can accomplish.”