In a new study researchers from Wageningen University & Research in the Netherlands and colleagues in Japan and Spain have found a simple mechanism for control of plant growth. Implementation of these findings can help growers to design new crops with for example resistance against disease, drought or flood. They publish their discovery in Nature Plants of 15 May.

The research team shows that the enormously complex response to the plant hormone auxin can be reduced to a very simple switch-like model. Basically, auxin toggles one gene switch from ‘off’ to ‘on’, and at the same time, a second factor competes with this switch and thereby determines how sensitive each cell is to the hormone. Therefore, the numerous ways that plant cells react to auxin, whether it is a root branch or a the formation of a flower, depend on the combination of an on/off switch with a volume control knob.

The small auxin molecule is known to control many aspects of plant growth and development, and does so by changing the activity of many genes. DNA-binding ARF proteins bind to genes and switch these on or off, and auxin determines whether ARF proteins are active or not. Most plants have many different copies of the ARF proteins, derived from duplicating genes during evolution, followed by changes in their properties. What follows is a very complex web of ARF proteins that can trigger unique responses to the same hormone.

The team studied the auxin response system of the liverwort Marchantia polymorpha. This plant is an early land plant and has the simplest possible auxin response system, as the researchers described in an earlier paper in eLife that led to the awarding of the Wageningen Research Award to Hirotaka Kato and Sumanth Mutte in 2019. In the new study in Nature Plants, the team now made use of the extreme simplicity of the Marchantia auxin response system, and dissected its workings through a combination of genetics and protein biochemistry. The work revealed a very simple design of two competing ARF proteins to be at the heart of the auxin system. 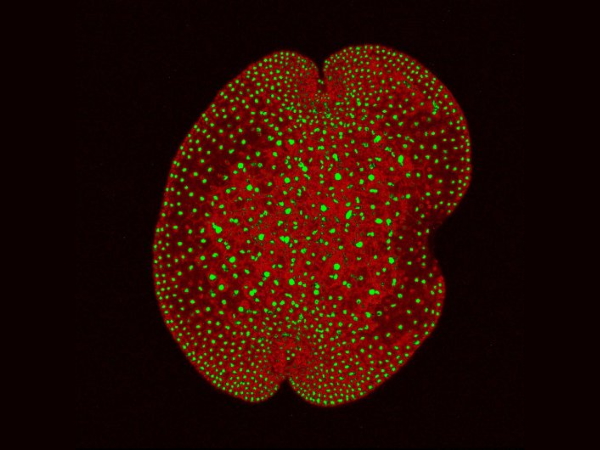 Fundamental view change for auxin
“We believe that our finding will fundamentally change the way researchers view the workings of the important auxin hormone,” says Dolf Weijers, head of the Laboratory of Biochemistry and leader of the research team. “At the same time, this leap in our understanding of how cells respond to the hormone gives unprecedented new abilities to modify cellular hormone responses in crop plants, where propagation, rooting and many other traits that depend on auxin response.”

Fooled by complexity
For decades, studies in flowering plants, including the model plant Arabidopsis, have led to the idea that plants use a very complex network of response factors to allow different plant cells to respond in different ways to the same hormone. In this way, some cells will grow, others divide, yet others differentiate. It is also thought to allow the same hormone to trigger root formation and flower formation, depending on where in the plant the response to the hormone occurs. Now, the research team describes their discovery of a very simple principle underlying the complex responses to the plant hormone auxin. It is likely that the same simple principle operates in other plant species, that have large families of ARF proteins. The present study thus helps to better understand how plants, including crops, respond to the hormone.

For their ground-breaking study, experimental biologist Hirotaka Kato, formerly at Wageningen University, presently at Kobe University, collaborated with colleagues at the Wageningen Laboratory of Chemistry and Biophysics, with the Alba Synchrotron in Barcelona and at the University of Kyoto. The study was partly financed by an NWO VICI grant awarded to Dolf Weijers in 2015.