Three rosarians from the Manawatu were recently honored with awards recognizing their service to the rose in New Zealand.

Peter Elliott was presented with the T.A. Stewart Memorial Award for service to the rose in Australia or New Zealand. Peter has had a significant involvement with the rose at local, national, and international levels. 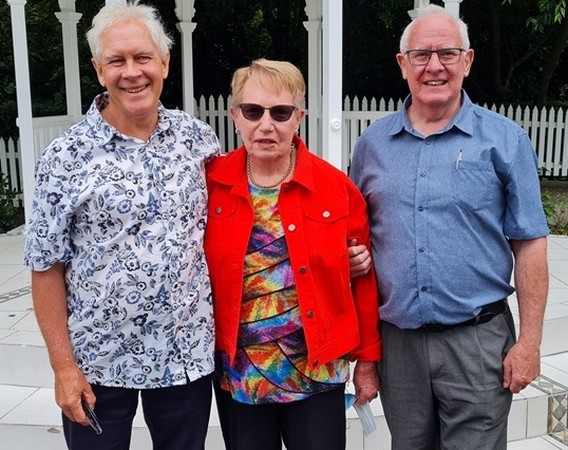 Peter also served three terms representing Australasia on the World Federation of Rose Societies (WFRS) and was presented with the WFRS Silver Medal in 2015. Peter also convened the organizing committee for the WFRS Regional Convention held in Palmerston North in 2013.

John Ford was presented with the New Zealand Rose Award for services to the rose in New Zealand.

John for many years ran a small rose nursery supplying rose plants around the country and is now involved in breeding new varieties.  His variety ‘Bright Eyes’ won the Gold and Silver Stars, along with the Nola Simpson Novelty Award at the 2020 New Zealand International Rose Trial Ground awards.

In receiving the award, John acknowledged the support of his wife Christine and his four children who have all assisted along the way.

The New Zealand Rose Society has been very fortunate to have Heather’s knowledge, skills, and experience to guide it over the years she has served in her positions. Heather has spent many hours working for the betterment of the New Zealand Rose Society and roses in general, often behind the scenes to ensure the smooth running of the NZRS and its activities and events.  Heather has also often been the first point of contact for new members or for inquiries from the public.

“Peter, John, and Heather have given many years of service to the rose and on behalf of all rose enthusiasts, I congratulate them on their awards,” says Hayden Foulds, President of the New Zealand Rose Society.