In recent years, interest in LED lighting among chrysanthemum growers has increased considerably. Initially, they were interested in hybrid lighting systems, where LED supplements the existing HPS lighting, but now they are also interested in full LED. In the choice of the LED lighting system, growers have questions about the light spectrum, especially on the control of elongation and response time. Growers fear that chrysanthemums may remain too short in winter. That is why, when using full-LED, the options to control stem length with the light spectrum are investigated. 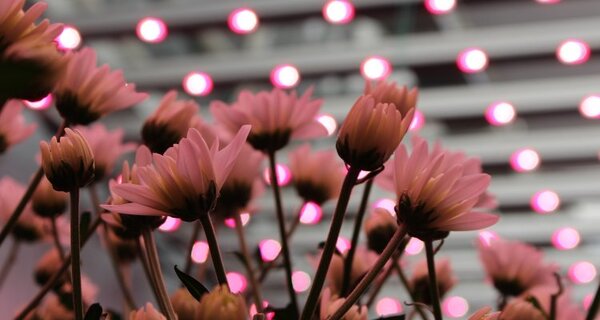 In the autumn of 2021, the business unit Greenhouse Horticulture of Wageningen University & Research investigated the effects of the light spectrum on the growth and development of four chrysanthemum varieties. Results showed that stem length can be stimulated very well by “end-of-day” lighting with 20 μmol/m²/s far-red light for 30 minutes. Furthermore, days to flowering were reduced, as well as (unwanted) shoot growth in the lowest part of the canopy. The question remains whether comparable effects can be achieved with lower intensity or a shorter period of far-red light. That would be a good steering mechanism to control stem length to the desired values. Another question is whether the far-red light at the end of the day is necessary during the entire cultivation period, or whether application during the first period of cultivation is sufficient.

To answer these questions, Wageningen started the cultivation of four chrysanthemum varieties under 200 μmol/m²/s full LED in May 2022. Winter conditions were simulated in IDC LED, with greenhouse cooling and maintaining a share of sunlight of approximately 20% and of LED light of 80%. Intensities of far red light at the end of the day varied between 20, 10 and 5 mol/m²/s, and the duration ranged between 10, 20 and 30 minutes. In addition, the percentages of green and far-red light in the spectrum during the day, and plants were also grown at a lower light intensity (100 mol/m²/s).

Chic plants were harvested from week 28 onwards. Flowering stems of Magnum, Pina colada and Baltica will follow shortly. The first results show that plants grown under the "end-of-day" far-red treatment can be harvested a few days earlier than without “end-of-day” far-red light. Giving “end-of-day” far-red light only during the first weeks of cultivation does not give the same effect as when the end-of-day treatment is given during the entire cultivation. In the coming weeks, flowers of all treatments will be harvested, and the results for stem length, weight, and light use efficiency will be collected and analyzed.

This research is funded by the Ministry of Agriculture, Nature and Food Quality and Glastuinbouw Nederland within the program Greenhouse as a source of energy, with a contribution to the lamps and their control by Signify.