The fuchsia is a well known and popular plant to grow. Breeders are constantly working on improving the habits of the fuchsia varieties. Brandkamp, a breeder of several bedding plants, also spent many years on improving their range of normal fuchsias. However, after achieving their major requirements in fuchsia breeding, they started to focus on introducing new varieties. So, last season, they introduced three fuchsia varieties with large flowers. "We have created a new product from an old well known plant, and the reactions till now are very positive," says Jürgen von den Driesch, Sales Manager at Brandkamp. 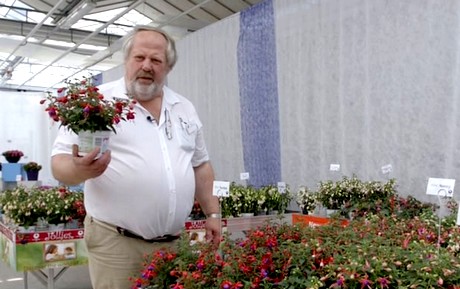 Jürgen von den Driesch at the FLowerTrials 2015. Click here to view the video made of the new varieties presented by Brandkamp at the FlowerTrials 2015.

Jollies Fuchsia La Grande
The European range of Brandkamp's fuchsias is called Jollies. Last season, they introduced La Grande, a new range consisting of three varieties. This year they added three new varieties to the assortment, which currently are available to the growers. At the moment, the La Grande range consists of six varieties.

Large interest
The European interest for the large flowered fuchsias is surprisingly large. "Customers from Southern Europe love plants with large flowers and with the development of this La Grande range we are now able to meet this demand. Also in the UK, the demand is high. Our existing Jollies range is already very popular in the UK and the new La Grande line is adapting very quickly over there too. Remarkably, we are also recognizing an increasing demand for the large flowered fuchsias in the Netherlands and Germany. This is actually something we didn't expected," says von den Driesch. 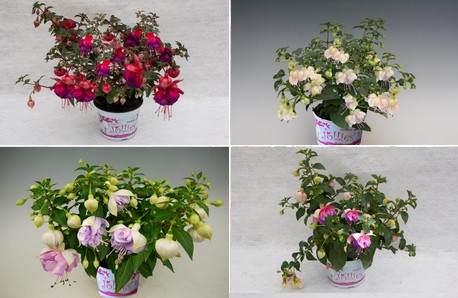 Blooms all summer
Brandkamp has its own breeding program for fuchsias. One of their major requirements regarding breeding is the need for the fuchsia to bloom all summer long. "We were determined to let this variety bloom all summer long, because for the majority of the old fuchsia varieties this is not the case," says von den Driesch. Besides that, due to the high popularity in Southern Europe, high sun tolerance for the La Grande range is essential. Also a lot of attention is paid to the creation of busy plants without berries. Furthermore, Brandkamp is constantly adding new colors to the entire range of fuchsias. In the past, the red-blue and red-white varieties have been very popular. Now we see more diversification in the market, so the demand for more colors is increasing," he says.

Brandkamp
The entire fuchsia assortment of Brandkamp consist of 60 varieties. The mother stock of the fuchsias are located in a 1.5 sized greenhouse in Uganda. About 4.000 square meter is used for the cultivation of these fuchsia mother plants, the remaining space is used for other bedding plants and pot chrysanthemums. The 1ha breeding and 3,5 ha rooting station is located in Germany.